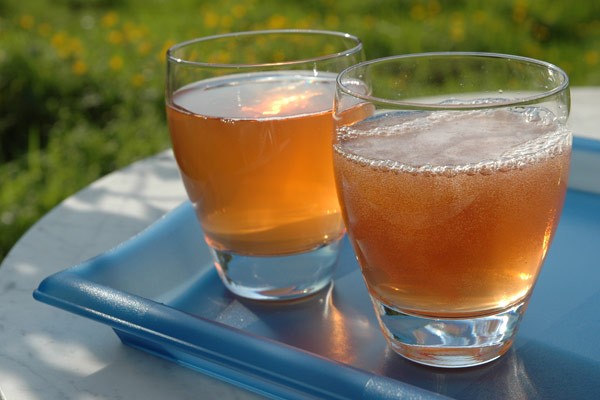 Kombucha mushroom has recently become very popular all around the world. The name kombucha is of Japanese origin, but the mushroom itself is also known as Japanese, Chinese, Russian and Indian tea mushroom. Kombucha is actually a symbiosis of two living organisms: fungi and acetic acid bacteria.

It is believed that kombucha drink can retrieve youth; it makes body strong and vital, darkens the hair, delays aging related diseases and enhances immunity. Some medical experts also claim that it can be beneficial in cancer prevention.

Although it is commonly referred as mushroom or fungus, kombucha is complex organism. It is a mixture of two different living cultures, including yeast and some bacteria. It has amazing healthy properties, but kombucha does not look attractive at all. It’s a thick, slimy, brown cushious jelly mass that flows on the surface of sweetened liquid. After fermentation, this liquid is used as a tea drink. Since it is acidic, it can also be used as a condiment instead of vinegar.

Process of “making” kombucha takes place in a glass jar. The first step is to put kombucha into plain, sweetened water. It should stay in the liquid for a few days, until it reaches desired level of acidity.

Kombucha is frequently added to various cold tea drinks, made from different herbs. That is why it is known as a tea mushroom. It is important that you drink it mild, since kombucha contains gluconic acid, which is normally produced in humans’ liver. Gluconic acid gets directly into blood system and plays important protective role in our entire body. Moderate consumption of kombucha provides protection from various toxic substances we absorb through respiratory organs. Toxins from our surrounding that enter the body can cause cancer development.

The best way to prepare kombucha is to start with two liters of tea. When kombucha culture has grown big enough to begin to multiply, you can produce larger quantities of the beverage. Many people would swear that drinking kombucha made significant improvements of their health in many ways. What about the quantities and frequency of drinking it? Can you have too much kombucha?

Opinions on dosage of kombucha are divided. Many people regularly drink large quantities of kombucha on daily basis and do not experience any negative side effects. On the contrary, they say they feel more energetic, fresh and healthy.

However, some cases suggest that too much kombucha could make you feel queasy, but the fact is that it is not a kombucha side effect.

Actually, sick feeling comes from toxic substances that are already in the body, not from kombucha. Kombucha can help your body to release these toxins into your bloodstream, so you feel sick. If that is the case, just lower the amount of your kombucha tea or take a break for a day or two. It can happen when you start consuming kombucha.

Once your body gets used to it and you take it regularly, you can’t have too much of it. Many people say drinking kombucha changed their life and made them feel really healthy.