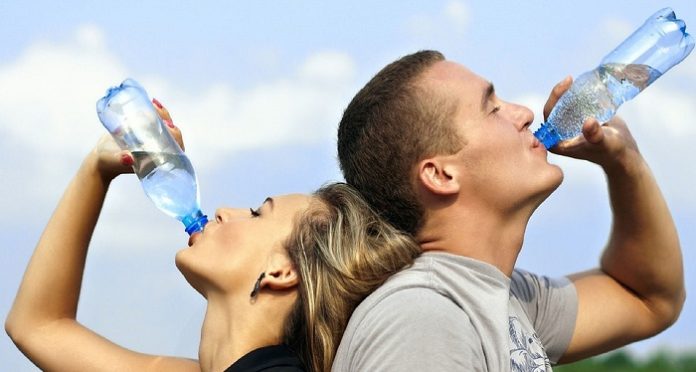 However, recent studies show that there is such a thing as drinking too much water and that it can even become a health issue if not treated accordingly.

A European Union directive (no. 1170/2011 from November 16th, 2011) stipulates that “water cannot prevent dehydration”. This European directive is based on a three-years study conducted in a research center in Italy, which managed to fight down a belief that almost became irrefutable throughout the past decades. According to this study, water is not entirely responsible for hydrating the human body.

Those who promote the new law claim that dehydration represents an affection caused by an unbalance in the human body, which cannot be fully recovered only by drinking water. A healthy person will not dehydrate even though he or she does not drink the stipulated amount of water daily.

On the contrary, those who suffer from such body unbalances will continue to be dehydrated no matter how much water or liquids they will drink.

Dr. Margaret McCartney, a reputed Scottish researcher, claims that excessive water can cause sufficient damage to the human body, both on the short term, but especially on the long run. Some even talk about “water intoxication”, which means that drinking excessive amounts of water will lead to a lack of sleep, and thus, lack of rest.

Obviously, the lack of sleep is assimilated to the fact that water requires to be eliminated through urine and, by waking up during the night to eliminate the water consumed will only lead to further sleep and rest problems.

Throughout the years people were lead to believe that by drinking at least 2 liters of water daily they will prevent any kidney affections, will lose weight, will increase their focusing power, will have a more glowing skin and will stay younger forever.

Moreover, over the past decade all miracles solely attributed to water were deliberately exaggerated, leading to presumptions that can truly harm one’s body health. The biggest exaggerations regarding water consumption were made by water local and international producers who wanted to boost their sales and generate revenues of billions of dollars solely from an indispensable product like water.

Moreover, as previously mentioned, there is such a thing as water intoxication. Drinking water in excess can lead to a fatal condition called hyponatremia, which means that there are insufficient sodium values in the human blood, caused by an excessive amount of water. Water intoxication is similar to the effects it causes when someone drowns, but on the inside. A low level of body salts can lead to further neurological problems, including lumps and tumors developed in the brain area. The most dangerous aspect is that hyponatremia can easily be mistaken with body dehydration, due to similar symptoms. In these cases, one of the most reliable distinctive factors is given by the coolor, volume and the frequency of urine. People who spot hyponatremia will often have a pale colored urine and will urinate a lot and frequently. On the other hand, those who suffer from dehydration will urinate rare, with a reduced volume and frequency of urine, including a darker color.

Water intoxication has similar effects as drowning. The electrolytic unbalance and tissue swallowing can cause irregular heart beating, allowing the liquid to infiltrate into the lungs. Swallowed brain tissues further cause convulsions, comma and, in some cases, even death. The only treatment is to limit the water consumption and administrate a saline solution (salt), in order to absorb water excess.

Moreover, water intoxication can also cause digestive and consciousness problems. If the treatment is administrated prior to the tissue swallowing phase, there are chances of the patient’s full recovery in a few days.  In order to avoid all these complications, it is recommended that we drink water responsibly, moderate, and only when we are thirsty. However, there are still plenty of myths claiming that, the thirst sensation only comes after the body is already dehydrated, thus we should permanently feed it with water. With so many contradictive pieces of information, what should one believe?

Another study conducted by a renowned Romanian doctor established in the U.S.A. reaching a period of three years comes to the conclusion that water is, in fact, not beneficial to the human body when overdosing it.

There are plenty of myths revolving around the fact that drinking water excessively will cause less renal problems and will allow any sand or rocks deposited in the kidneys to self dissolve. Moreover, the doctors links to the fact that, since various climates throughout the world require a certain amount of humidity, there are no direct linkages between drinking the stipulated amount of 8 glasses of water daily and the health benefits coming from it. Some people categories including sportsmen and those who constantly use their physical strength, as well as those living in dryer climates may feel the need of drinking more water to prevent dehydration.

Similarly, those who sweat a lot due to natural causes (physical effort, heat) may also feel the need of drinking too much water, which is understandable. On the other hand, regular people with regular brain activity and workout routines, sedentary people and those who live in moderate climates will not feel the exact need of drinking water constantly.

The same researcher comes to bust other myths regarding water consumption, including the fact that drinking water will diminish headaches and will benefit your skin by making it more elastic and even.

Again, there are no concluding arguments that lead to these assumptions. No relevant statistic data was conceived after conducting such studies, leading to the fact that these axioms are only promoted as myths and have little to none medical background. Although there is proof regarding the fact that dehydration can cause skin affections, drinking large amounts of water will not automatically recover its structure and determine it to become more even, with less signs of aging or other skin affections.

As for reducing headaches, drinking water may become beneficial more as a placebo effect.

However, there are conclusive studies showing that those who work during the night require a larger amount of water in order to keep them focused and healthy. But this is due to the fact that, biologically, all humans are programmed to rest during the night, thus, any cerebral activity needs to be liquidly sustained.

To conclude, water in excess, just like any other thing, can lead to further health issues. There is such thing as drinking too much water and harming yourself in the process. Most recent studies claim that people should only drink water when they feel thirsty and for as long as they have the sensation. Drinking water will not increase the focusing power or determine your skin to glow and become more even. Similar, drinking water will not increase or sustain your brain activity during the night. Last, but not least, people should bear in mind that there are large quantities of water in the foods we consume as well.

Thus, apart from those 8 glasses of water drank daily, one also gathers more water from fresh fruits and vegetables, soups, coffee, tea, and even alcohol. In fact, all foods digested contain a smaller or larger amount of water. Our kidneys are designed to eliminate around 1,5 liters of liquid through urine in 24 hours, but that does not mean you should immediately fill in your body with the exact same quantity of water.