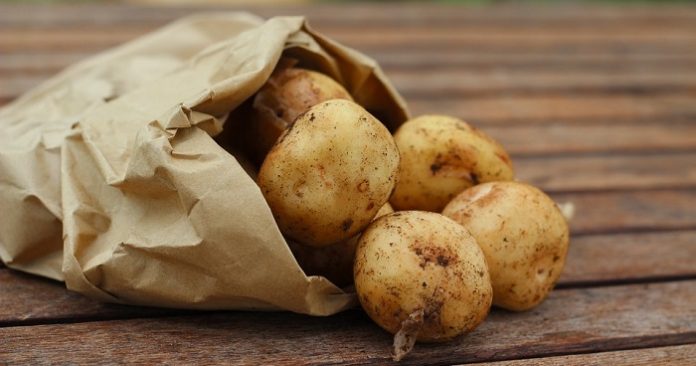 Some of the vegetables are generally consumed in raw form, while some others are cooked thoroughly.

Usually, raw veggies have a bright color with fresh juicy flavor. But, there are few vegetables, which are hardly consumed in raw form, and potatoes are one of these exceptional vegetables. Though they may be consumed as raw vegetable by very few people, their little bitterness and starchy texture is really unpleasant.

Potatoes in raw state are not, in fact, poisonous, though there are a number of reasons for treating them very carefully.

Indigestibility – Is it a problem in raw potatoes?

Potatoes have a very high amount of nutrients, and their major purpose is, in fact, to provide foodstuffs to potato plants of subsequent years, and it is for this reason, they are much useful to us.

The significant value of all potatoes may be found as starchy carbohydrates, which are the main fuels in our body; however, we assimilate raw form of starches very poorly. Just as the starches of grain, potato starches seem to be digestible, and offer low nutritional support, if they have not been steamed.

As they are not digestible, raw potatoes cross our upper intestine along with slight modification, they get to our lower intestine and at that point, they start fermenting under an effect of bacteria in intestine. The consequence of such fermentation is, however, gas production that may lead to cramping, bloating or flatulence. Though any of those effects may not be a risk to your body, they are not comfortable in any way.

Almost all kinds of raw foods may lead to some possibility of food borne diseases. Some of these diseases are caused due to slight amount of bacteria as well as microbes, called as the pathogens, which often remain on our food. Cooking veggies keep you away from many health disorders by steaming and destroying those pathogens.

A vegetable that is eaten in raw state should be, at first, washed carefully and peeled, if needed. IN the same way for potatoes, good care needs to be taken in order to eliminate the presence of dirt from peels.

How raw potatoes can be beneficial to your body?

Though chewing some raw potatoes may not be as tasty as any baked potato; however, its presence of nutrients is almost same. Raw potatoes have a large amount of different minerals and vitamins but some of those nutrients are also found on the peels that are not always consumed, while eating potato without heating them. There are lots of recipes that may require you using raw form of potatoes.

The presence of Vitamin C in raw potatoes backs up a strong immune structure, and it also assists in effective absorption of iron. In addition, it is also able to build up collagen, which keeps up the healthy look of your skin and allows healing of wounds.

You know that vitamin C may also be regarded as antioxidant, and that is why if you consume it in adequate amount, it can help you to fight against cellular damage, which occurs because of the exposure to free radicals. As a result, you can combat different health disorders, such as, cancer and heart disease. In fact, the researchers have found that a single big raw potato together with its peel skin consists of almost 72.7 mgs of vitamin C.

Potatoes as the major sources to get potassium

Potassium is one of the nutrients, which may enable you to control the blood pressure level.

Besides, it has also a significant role in muscle contraction, strength of bones and also in the digestive system. One big sized potato holds almost 1,502 milligrams of potassium. Thus, when you find that there is lack of potassium in your body, you may think of adding raw potato to the diet plan.

A large potato that is not peeled has fibre of about nine grams. The intake of enough quantity of fibre with your everyday diet helps in healthy digestion as well as in normal function of bowel.

Besides, this may help to regulate a good level of cholesterol. Consumption of foods, which consists of fibre, may also assist you to manage your body weight as fibre digests in a slow way, and it denotes that it can make keep you feel full for extensive period.

Women must gain twenty two to twenty eight grams fibre on a daily and men must gain 28 to almost 34 grams every day.

Do not keep away from consuming foods, which consist of carbohydrates as you show concern on gaining of weight. Your own body depends on a good carbohydrate intake for having energy. It is to be noted that a large uncooked potato that has skin on its surface contains about 58 gm of carbohydrates; however, the fat and calorie content is extremely low. Thus, you may maintain healthy weight very easily.

So, we can now say that raw potatoes are not completely unhealthy to you. Though most of us have the habit of consuming potatoes in cooked form, raw potato is not a bad option for us. Its taste may seem to be bitter and very odd, but it can offer you much amount of dietary values.

However, there are only few negative effects of eating raw potatoes, and you do not have those effects, raw potato is suitable option for you.