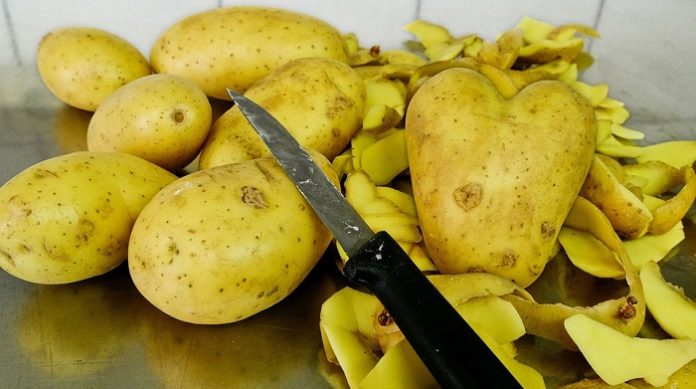 Potatoes are obviously one of the vegetables that you perhaps use almost every day in many recipes. Though this vegetable is not good to diabetics, you are most likely to eat at least one potato daily, if you have blood sugar problem.

However, when you have large number of family members, you will possibly want to buy a huge sack of potatoes at a time and store it. But, do you know the way of storing it? Or, how long do your potatoes remain fresh? Here, a detail discussion may give you some knowledge on the shelf life of this vegetable.

Identify the rotten potatoes in your kitchen

You have no risk of eating rotten potato because there are some ways to identify it. While a normal potato has transformed into a green potato, it indicates spoilage. This green layer of any potato is poisonous and must be removed from your room as soon as possible. At the same time, greenish fleshy part must also be thrown away.

Sprouts specify that the starch of a potato has started to transform into sugar. When these sprouts are seen along with wrinkling and shrinking, your potato must be rejected. Rancid potatoes may appear stained and become very mushy and soft. While they are not removed, they may speed up spoilage of other available potatoes in your sack. Decayed potatoes should always be disposed of.

For how many days your potatoes remain fresh?

Potatoes may be able to retain its original condition for almost three to five weeks in your pantry and about three to four months in your fridge. In fact, if you try to make out shelf-life of your raw potatoes, we may say that it is related to several factors, like preparation technique, species of those potatoes, sell-by time, number of potatoes stored and also humidity level of weather.

Due to their comparatively low price and several benefits to health, potatoes are cooked in diverse ways. However, you need to store potatoes properly after purchasing it from shops.

Obviously, most of the foodstuffs last for a very short time period, when there have not been preserved rightly. However, keep in mind that unlike other veggies, potatoes include sell-by time, while they have been provided to you in some plastic container. It is the last date, when these potatoes can be sold (not consumption date) to the customers. Due to this feature, you will perhaps be able to eat potatoes safely to have pleasure from your preferred meals, just after a lapse of sell by time. When no such date is mentioned on your packet, the time to use may be the date of purchase.

Keep potatoes away from water

When your potatoes become soaked by any means, they may also have the growth of mold, wherein they should be discarded. Thus, never rinse your want potatoes before their storage. In case of crushed potato pieces, they may begin to become old while the liquid starts separating from solid. Initially, this liquid seems to be quite clear in nature, but later, it is likely to create some white mist. At the same time, potatoes may produce sour taste. At the time, you have to throw the smashed potatoes.

If you think that the surface of the potatoes has full of dirt, you have to allow them to dry off, and then apply a brush to eliminate any visible plod. You may cleanse them only a minute before cooking them.

After purchasing a few kilos of potatoes, you have to take some time to filter potatoes. Search for those potatoes that have broken coats, bumps, or some other observable damage. They must not be preserved. They may decay quicker than the good ones but will possible spread the spoilage to pure potatoes.

When you have separated the spoiled potatoes, you have to place the good ones in the place, which is not in contact with moisture or light. These two things may lead to rotting and greening of potatoes.

In addition to it, you will also need to keep your potatoes properly ventilated. Many potatoes are being sold to customers with mesh carriers, which let the flow of air. Do not move your potatoes to some sealed box.

Try to keep up cool temperature

However, it is to be noted that fridges are extremely chilly for your potatoes and may damage their flavor. The low temperatures in any refrigerator may lead to the conversion of the starches of potatoes into sugar, offering it an unattractively sugary tang. It may also impact their color.

Do you still like to keep potatoes in fridge? Then, get it partly cooked. Though freezing seems to be an indistinct storage form, potatoes remain wet and create ice crystals, which ultimately take over french fries.

When you place potatoes inside your fridge, you have to allow them to regain the normal temperature slowly prior to cooking. It will decrease the staining and completely remove it.

After cutting the potatoes, do not leave them in an open space; cook them soon. The uncovered potato pieces may not be kept well for longer time. When you cannot cook cut potatoes at once, you have to place them under cold water. Their texture and color will remain intact for almost one day.

Do not store the veggies near fruits

Another essential point, which you should consider, is that the potatoes must not be placed near fruits. Some fruits, such as, pears, bananas apples, release a chemical substance, known as ethylene gas, which stimulates ripening process. You perhaps have seen that the fruits are likely to mature faster while they are kept adjacent to one another. Ethylene may cause the sprouts of potatoes easily, and thus, you have to store fruits somewhere else.

When you like to store potatoes for a very longer period, you may follow some techniques. It is also an excellent option for those potatoes, which have become already a bit damaged or is vulnerable to decay. To treat potatoes:

This above techniques will help you to have fresh potatoes in your room for a longer time.

Thus, it may be said that there are some differences in storing cooked potatoes and raw potatoes. However, your fridge is not a perfect place for your raw potatoes. The right storage may allow you to keep any form of potatoes fresh and undamaged.

In many cases, it is seen that dinner of last night has not been consumed completely, and you want to eat it as breakfast today.

There are some ways in which you may utilize those leftover potatoes. Add one or two eggs (on the basis of the amount of squashed potatoes that have been left), pepper and salt along with spray of milk when the potatoes become extremely thick.

Then, whip up this mixture using fork; while your pan turns out to be hot or oiled with average heat, place a scrape of potato blend into a saucepan and crush with the help of your spatula. Brown the mixture and you can now get a delicious potato pancake very easily.