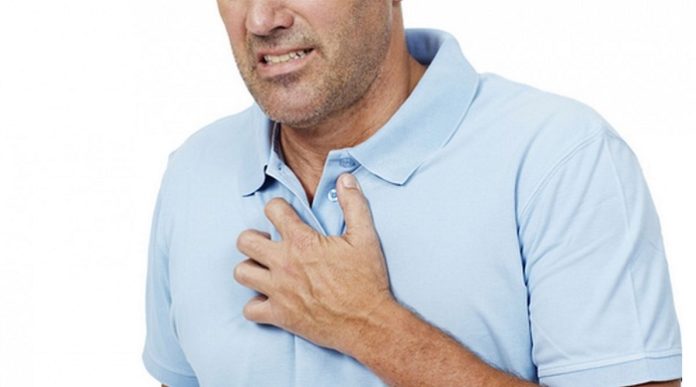 Shortness of breath also called dyspnea is an uncomfortable respiratory sensation. Although it might sound serious, it isn’t always the case. There are numerous factors responsible for this condition. Some of them aren’t a big issue, while others, such as gastroesophageal reflux disease (GERD), respiratory diseases, cardiovascular diseases, or anxiety disorders, may be more serious and seek medical attention.

This condition may appear both on its own, with no other symptoms, and it can also be accompanied by additional symptoms, such as fast heart rate, chest pain or nervousness. If you suffer from this problem, it’s always a good idea to talk to your doctor in order to discover why you experience shortness of breath after eating.

Now we will find out which are the commonest reasons behind shortness of breath after eating.

The commonest causes of shortness of breath after eating

Eating too much or too quickly. When you eat large amounts of food or swallow it too quickly, your stomach will enlarge. Besides, you may also swallow too much air when you eat fast and the possible outcome of this is bloating. Your enlarged stomach presses against your diaphragm, which interferes with your breathing properly. Although your diaphragm will have far too less space to expand, it will still have to supply your body with the same amount of oxygen. In this situation you are likely to feel shortness of breath.

In order to avoid this unpleasant condition, make sure to eat moderately and slowly.

Indigestion. This disorder can also trigger shortness of breath after eating. Indigestion refers to a feeling of fullness in your stomach and/or discomfort in your upper-chest while taking a meal. Some of the reasons why indigestion occurs include eating too fast, eating acidic, spicy and high- fat food, stress and  over-eating. More serious conditions, such as gallbladder disease or peptic ulcer, may lead to chronic indigestion. Some of the typical symptoms of indigestion are gas, nausea, vomiting, acidic taste, heartburn, abdominal pain, diarrhea and bloating.

Obesity. People with obesity are more prone to experience serious problems with shortness of breath after eating, because their abdominal cavity is always extended due to excessive amount of adipose tissue. That’s why obese people have decreased lung expansion and problems with breathing all the time, especially after eating.

Gastroesophageal Reflux Disease. This may be one of the reasons of shortness of breath after eating as well. In this condition, which is often called GERD or acid reflux, the lower esophagus tends either to open too often, stay partially open most of the time, or fail to close appropriately. Eating can be a trigger of acid reflux. This allows the stomach acid and food to go back from stomach to the esophagus, which may trigger a sensation of tightness and/or burning in your lower chest and the middle abdomen, dry coughing, hoarseness, trouble swallowing and asthma. Dyspnea is also included in these symptoms. It’s not a big deal if you experience this condition once in a while, but if the symptoms appear more than twice a week, it indicates GERD.

As for the treatment for this unpleasant condition, its aim is usually to prevent and alleviate the symptoms. This includes changes in lifestyle and avoiding certain foods and/or medications.

Problems with lungs and airways. If you have an underlying lung disease, you are likely to feel out of breath after eating. This can be due to airways full of phlegm that make it difficult for air to pass freely. Asthma and pneumonia can also lead to being out of breath after a meal. A device with your regular inhaler for combating asthma may relieve the symptoms, while the antibiotics are the main cure for pneumonia. If  you have already being suffered from  COPD (Chronic Obstructive Pulmonary Disease) and experience shortness of breath after taking a meal, it can be the sign that your condition is getting worse.

Shortness of breath after eating can be caused by other serious conditions, such as tumors in the esophagus, trachea, etc.

Always make sure to seek medical help in order to discover any underlying lung disease.

Arrhythmia. Arrhythmia is a term for irregular heart beats. This condition is quite common, but it’s harmless in most cases. It is also included in main reasons for feeling breathless after eating. Other common symptoms of arrhythmia are palpitation, exhaustion, chest pain, lightheadedness and fainting. This heart condition may sometimes lead to stopped heartbeat or cardiac arrest. Mild arrhythmias may not cause any symptoms at all.

Arrhythmias are treated with the combination of medications, surgery and changes in the life style.

Allegy to certain food . You may feel out of breath after eating something you are allergic to, when your immune system overreacts to a certain kind of food or a substance in it. Besides breathlessness after taking a meal, other common symptoms of allergic reaction are indigestion, wheezing, heavy breathing, chest pain, vomiting, diarrhea, hives, skin rashes, nasal congestion and lightheadedness.  You may be allergic to any food, but the following eight types are usually considered to be main triggers: peanuts, tree nuts, eggs, milk, wheat, fish, shellfish, soy, mustard seeds and sesame seeds.

Try to limit the intake of any of these foods and see how you will react.

Psychological issues, especially anxiety. These psychological illnesses are usually characterized by intense fear, paranoia, panic attacks and restlessness. All these symptoms interfere with a person’s functioning normally. These symptoms may vary depending on the type of anxiety disorder. Shortness of breath is a common symptom of them. Anxiety disorders are usually followed by other disorders, such as anorexia, bulimia, binge eating, depression and other mental illnesses. You are very likely to be out of breath after eating if your anxiety is connected with weight and/or other diet relating problems. You may also experience other symptoms, such as nausea, lightheadedness, chest pain and intense fear.

There are various options for treatment of these disorders and they depend of the severity of  the symptoms. They may include a combination of individual counseling,  medications and alternative therapies, meditation and massage among others.

How to cope with shortness of breath after eating?

The first step should be some alterations in your lifestyle. For instance, if you are overweight or obese, you should try to lose extra pounds.

Also, some drugs such as aspirin, ibuprofen and naproxen may cause breathlessness. Try to avoid them and opt for acetaminophen to relieve pain. Make sure to drink large amounts of water throughout a day.

If you suffer from acid reflux, think of taking antacids that are very effective when it comes to heartburn since these medications prevent indigestion. You can take one of these before going to bed.

However, have in mind that these drugs aren’t effective in the case of appendicitis, ulcer and bowel problems.

Is it possible to prevent shortness of breath after eating?

The answer to this question is definitely yes. You can take some measures to avoid feeling out of breath after eating. These are the following:

– Stay away from spicy food

If your symptoms persist or become worse, don’t hesitate to talk to your doctor in order to check for underlying more serious health issues.