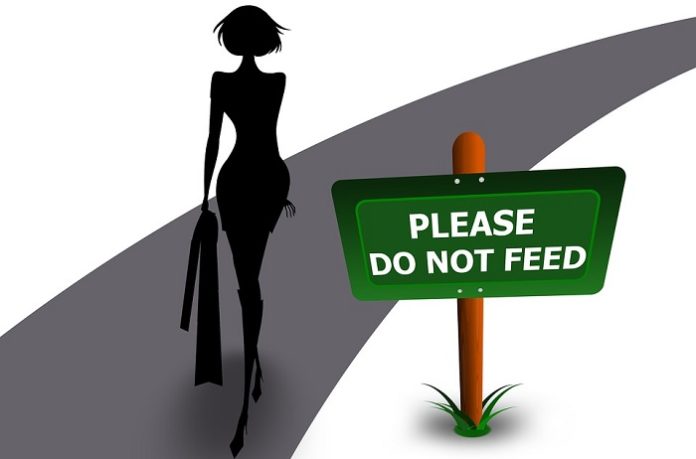 Everyone who had an encounter with any of the two disorders knows how difficult and severe they could be. The experience is terrible both to a person who suffers from it and those around.

Moreover, every individual who had experienced any of these could make the difference between the two. Both anorexia and bulimia are complicated eating disorders, they follow the same background pattern in a way, but their manifestations are different.

Simply speaking, an individual suffering from anorexia refuses to eat and thoroughly plans meals to meet a ridiculously low calorie intake, having an irrational image of the own body and weight. Such persons are often obsessively compulsive when it comes to eating. If they don’t follow the pattern they’ve created, they’re get themselves into mortal fear of gaining weight. All of this leads to serious underweight condition, even life threatening.

Bulimia, on the other hand, has a different scheme. People suffering from this disorder also have wrong perceptions of their own look, weight and body in general. However, they usually eat a lot in one row; they would most likely have a lot of unhealthy food, such as fatty snacks, sweets, fast junk food and such. After overeating, they make themselves throw out everything they’ve eaten, hidden from eyes that could watch.

They also eat secretly. While a patient with anorexia carefully plans when and what and how much to have, bulimic people frequently overdo everything, but get themselves rid of it shortly after.

So, on the surface of these two serious health conditions, both mental and physical, it seems they are easy to discover, recognize and differ. Well, that’s just partially truth. These conditions are serious and they usually have a complicated background. They are not easy to discover in short term, in the first place. Let’s dig deeper and examine both cases more thoroughly.

Anorexia, Anorexia nervosa, is an eating disorder. It is behavioral disorder, meaning a person suffering from it has some inadequate and unhealthy behaviors, concerning food and eating. Patients that suffer from anorexia always have an unnatural and abnormally low body weight.

They literally live in fear of gaining weight, so they thoroughly and carefully plan their food intake. They have a completely distorted perception of their own body. They tend do everything just to keep their shape, restricting their calorie intake to life threatening low levels. They always appear skinny and underweight.

The pattern of an anorexic person’s actions is well planed and strictly regulated by the individual. They follow great deal of self imposed rules about food and eating and behave completely obsessively compulsive. Those efforts to keep their shape they wrongly consider appropriate and good get them serious problems with interfering in normal life, making all social situations difficult to deal with. For example, an anorexic person would be frightened to get engaged in some social event where he or she would be offered a lunch or such.

Anorexic persons usually exercise for abnormal durations and frequency. They are skinny like skeletons, but they would still go running, go to the gym and train. They tend to keep their body weight or to lose more.

Moreover, no matter how much kilos they lose, they would always fear of getting more. Anorexia nervosa is just a manner of coping with emotional problems. It is not about food; eating control is just a manifestation. By controlling their weight, patient with anorexia compensate the lack of control over some emotions.

How to recognize anorexia?

If you are concerned for your own health or of a person you know, here are the most common signs of anorexia:

Bulimia, Bulimia nervosa, is also an eating disorder. It is serious, even life threatening, usually more difficult to recognize than anorexia. People with bulimia also try to compensate emotional problems by preoccupation of their body weight and shape. Just as people suffering from anorexia, bulimic persons are unsatisfied with their looks on the surface, but they are actually severely depressed, insecure and of a really poor image of themselves.

Bulimic behaviors are different than anorexic. People with bulimia eat and purge food. They usually secretly eat large amounts of all sorts of food, usually unhealthy snacks and sweets. After they’ve had it, they purge it. Some people do that after eating abnormally large amount of food, others after just a few bites of some snack.

There are two types of bulimia. Purging bulimia, when person self-induce vomiting and use laxatives diuretics and similar products in unhealthy dosages, after eating.

Other type is non-purging type, when patients try to get rid of the food they’ve had by excessive exercise or diet. This type could also remind of anorexia, but only of an early stage, when a patient still has a normal weight. However, both types refer to purging and they’re usually mixed.

If you are concerned for your own health or of a person you know, here are the most common signs of bulimia:

How to tell the difference between anorexia and bulimia?

As we stated before, both anorexia and bulimia are severe behavior disorder connected to food and eating. They have a lot in common. Both of those disorders are actually not about food, but about self image and emotions. Anorexic and bulimic persons use behavioral patterns described above to gain some control over their life.

They are usually suffering of really low self esteem, which commonly leads to depression. Controlling food intake is a behavior practiced to compensate a lack of control over other important things in their lives, considering emotional issues.

The main difference between anorexia and bulimia appears in their symptoms. An anorexic patient is seriously underweight; a person has carefully planned food intake and exercise excessively, avoiding all situations where those rules could be broken.

However, it could take up some time to recognize this pattern and abnormal weight loss, until a person’s health is seriously damaged.

On the other hand, bulimic patients are usually of normal weight. It seems bulimia is more difficult to recognize, since people suffering from it have secret binges and purging.

However, they express fear of gaining weight and are preoccupied with their weight and their body shape. Between binges they could also restrict calories and exercise a lot. When eating, they could eat abnormal amounts of food in a row.