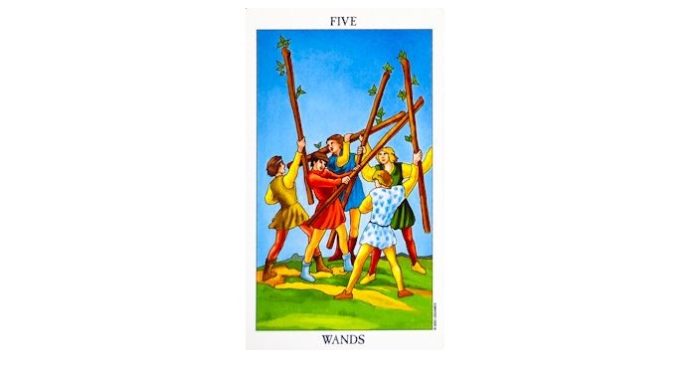 Forces of will, conflict, competence and challenges, ambition, self-determination, self-confidence, rebellion, the power of evolution, passion, catharsis, barriers are the main words that represent this card.

Attempts to solve the problem, reveal the root cause of the problem, the power of opposition, criticism for a valid reason, the revolution, the struggle for advanced changes, the strong mental activity are the positive aspects of this Tarot Card.

Conflict of interests and ideas without sufficient arguments, obstacles, hostility, violent imposition of authority, prevention of development, denial of the right to diversity, health problems are the negative aspects.

The Tarot Card Five Wands presents challenges and rivalries when it arises, indicates to us that in the situation we find ourselves, there are elements of competition – perhaps we are drawn into some sort of debate or ‘struggle’. Someone or something presents us with a challenge and compete with our position or condition. Likewise, this tarot card may indicate that within us there are blockages or obstacles that we need to solve in order to function normally, so that our energy can be aligned with our environment and our actions in it.

By meeting challenges, we become aware of our weaknesses and become aware of the amount of power we have in us. This makes us stronger and more persistent to fight for what we believe and what we stand for. Through all this time, we need to be aware of how difficult situations lead us to the light, because even after the rainy day comes the sun.

This tarot card expresses open and actively opposing a regressive force. In this regard, it is considered a positive card, because the major obstacles on the way of development can be overcome only in a decisive and very often fierce way. It can indicate that there has been a controversy and disagreement in attitudes, and that the unpleasant dispute finally reached its peak. The problem can be solved without serious consequences.

We do not need connections or relationships that fall apart under this card. However, this card of a small arcane can be properly interpreted only when we provide one more or two additional cards or when surrounded by other tarot cards within the active tarot system. The reason for this is that from the Fence itself the wands can not understand the reason, or the concrete meaning of the conflict itself, only the surrounding tarot cards illuminate the patterns and define whether it is a conflict with a positive or negative aspect.

It talks about an act or process that has been going on for some time and it is impossible to conclude from it what the result will be, who or what will ultimately win. Therefore, if the five wands are at the end, as the last card of a reading tarot, it is necessary to open at least one addition to the card in order to arrive at a concrete answer to the question raised.

If the tarot is drawn in the reverse position

Five wands signify powerful action, competition, and confrontation with challenges. This card advises you to perform confidently. This is the time to take the opportunity and confront the opponents energetically and decisively.

In the upright position, 5 of Wands often indicate the opportunity to prove yourself. You must rely on your abilities and throw away any doubt into yourself. This is the time to achieve what you want. You can come in a situation that requires confrontation with the challenge. In some cases, there may be rivalries and disagreements with people in the environment. This particularly applies to the work environment. You may participate in important negotiations or collaborate on an important project. In this case, disagreement and intolerance can easily arise. You may be forced to defend your position or your attitude.

In an emotional sense, this card indicates an internal battle or conflict. Now you have to face your emotional problems. Target your energy to analyze your deep feelings. When you are straightforward with yourself, you will easily find a new direction and a new perspective.

Five of the wands point to the new meaning of the word “energy” and “activity”. It is possible that you will feel the need to start with some sort of physical activity. Coaching a sport or a group sport for recreation will fill you in.

In terms of love relationships, this could be a period of strife and conflict. It’s important that you always take the time to think about your feelings. Your internal conflicts can also affect your behavior towards your partner. Communicate regularly and try to stay flexible.

As you can conclude on your own, the reversed Five Wands usually represents peace and harmony. The battle is over and now we have peace in place of the conflict. Now you can move on and direct your energy to something else. In an emotional sense, you can expect a period of satisfaction because you have overcome some of your internal conflicts and struggles.

Sometimes this card can be a problem with confidence and self-confidence. What you doubt about is your further progress. You may feel like you are not ready for challenges. It’s possible that you feel like you are “torn on 100 sides” or work on many projects in parallel. It would be good to take a break and assess the situation in which you are. You need to better organize yourself, or maybe just a few days off.

Five of the wands in the tarot The Light of the Soul is painted with blazing wands, with no one dominating. The scene exposes the conflict. The conflict is the keyword that is attributed to this card. In another jar, five are shown to young men who are fighting for supremacy. Each one holds a stick in his hand, shouts to each other, struggles for power, but there is no clear winner.

In the context of love, five wands are not the most convenient card. It is outraged by violence, and it is not known whether it is a real violence or a miscarriage. Certainly, this card contains both of them. The Petition represents the struggle for power or for the affection of a person.

Most often, two women will fight around one man or two men around a woman. There is no love here. It’s just about proofing. This alone would not be a problem, but this card carries a picture of a fierce conflict that can end tragically. These are, for example, love triangles in which eventually one side kills another or is seriously injured.

Five of the wands also apply to the conflict in ourselves. We are uncertain, we do not know what we want from the relationship, so we are arguing about nonsense. Fighting or quarreling with a partner can break out because both sides want to dominate. Everything is good while quarrels are benign, until the bad words do not start to come from all sides.

When a 5 of the wands appears in the opening, it indicates that there will be fighting for power. This may be a good indicator that a sympathy will be born in a sporting event. If it’s an existing fling, this is a cute way to start something amazing, which can end up with even more fun activity that is going to mark a big part of your life. If a person has a disagreement with a partner or any other person, the card indicates that hostility will be resolved. You need to be careful with the provocations. Firearms should be avoided.

The 5 of wands symbolizes caution, competition, and facing challenges. It advises you on the assertiveness of the action. It warns you of upcoming competition – in love or business sense. There is no reason to be afraid, alert yourself to your own qualities and strength. Believe in yourself more than ever before and you will surely put things in the right place. If you’re thinking of changing your profession, take this step.

The job situation will be very competitive, believe in yourself and fight. If you do not try, you will not win. Your way is fair even though people around you play a very dirty game. It will often seem that your victory is impossible, but it is not so.

The person you are in love with will even attract a few people from the environment, it will not be a real love but just sympathy and physical attraction. Despite this, do your best to do your best, and be armed with patience and understanding. For your future, it’s important to know that you have tried everything you could. A 5 of Wands can also mean a reverse situation – that another person or even more will attract you.

The finance plan is waiting for you a “tense” period. You will probably not be able to settle all your due obligations on time, but do not despair because you will be able to set things up in a few weeks to be very happy.

You are too busy occupying a very bad state of health. Take care to have enough sleep and to breathe when you feel fatigue.

It is impossible for you to feel the spiritual peace when you are in action all the time. Run like a “headless fly” that is causing you many internal misunderstandings. Take some time for yourself, listen to music, and at a short notice, take care of the worries and hurries.

This way, the 5 of the Wands symbolizes the period of inner peace and harmony. It marks the period that follows after numerous conflicts and struggles. Your tension has now been replaced by a quiet energy. You have overcome both external and internal conflicts and you are now ready to make a step forward in your life.