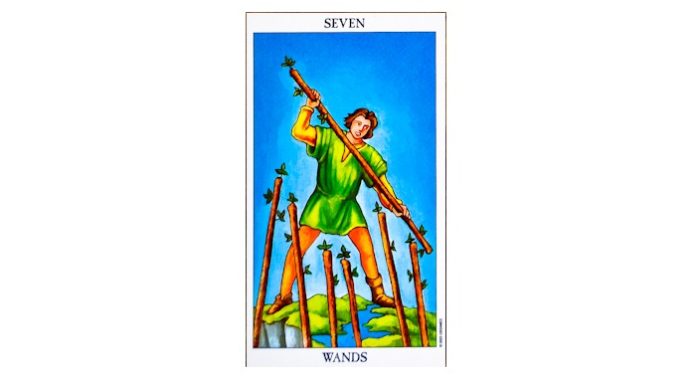 Breakthrough strength, heartbreak, risk taking, difficulty, difficult and painful work, quick reactions, commitment to our convictions and attitudes, courage are the main representations of this card.

Tarot cards 7 of Sticks marks heartbeat and heroism, a force that is at the same time aggressive and defiant. It is a defensive attack and represents our inner fighting spirit. The path ahead of us that we have to go to reach the goal is not easy, we need to de-clutter, get rid of fear, take the risk and move forward bravely.

This tarot card also tells us that in this case we need to be free of caution and rely on our ability and believe that we will succeed. The main theme of this tarot card is resistance; It may be that it is a rival, the defense of our attitudes from the opposite side that is imposed on us, or the rebellion towards the outside world.

Viewed from an inner perspective, the tarot card The 7 of Wands tell us that we have to resist with our feelings and thoughts that do us harm and break with our strength – the card tells us about the confrontation and the triumph of our inner demons. We must be prepared to make a lot of effort to make the outcome positive and that we will have a hard time working for us. Heroism is a term we usually associate with positive events, important and great works, and therefore the appearance of the 7 of the Wands in Tarot Systems is interpreted as one of the important life exams.

Courage, which is here, can be expressed in any field of life, at any age, regardless of gender, education and social status. Courage is not meant to be adventurous and unreasonable experiments, but to the primordial virtue where a valuable act of an individual unselfishly expands his positive influence on other people.

If the tarot is drawn in the reverse position

Uncertainty, lack of resources, money problems, greed, materialism, drama, lack of ground are the meanings of this card in reversed position.

A 7 of wands is a card of an independent action. It usually refers to creativity and learning. Despite the challenges that arise, a 7 of Sticks proves that you can overcome all obstacles with dedication and determination. If you defend your beliefs, you will triumph.

When the 7 wands appear in the opening, it reminds you to take a stand and fight for what you believe. Now you have to be firm and defend your position. Your self-confidence and the inner strength you own will help you to confront the opponents. Although you have the impression that the fight is very difficult, do not forget to take priority and do not lecture. Success will come only if you are firm and determined. You must face challenges and obstacles directly.

In an emotional sense this card points to sparks. Others insult you, but your work and achievements speak for themselves. You need to stay cool head. Also, it is important that you believe in yourself. Stay faithful with your beliefs. If there is a conflict with someone, do not lose control of yourself. Use your intellect and energy to resolve the conflict.

If you are looking for a new job or just want a recognition for something you have done, this card is an encouragement to make it clear. Now is the time to take action. This is also a period of learning something new. Projects that involve writing and learning will simply flourish.

It is possible that in the environment you have someone who wants to discourage you and you may be forced to defend your position. Your efforts will bear fruit.

In love questions, 7 of wands warn about conflicts or challenges in connection. It is possible that you disagree with your partner on the issue in which direction your relationship should go. You’d better talk cold heads and solve problems. In some cases, this card is a sign of rivalry and the interference of a person in a relationship. If this is the case, decisively defend what you have and want and you will surely succeed.

When opening the 7 of the Wands in a reverse position, it usually indicates a lack of energy or determination when facing an obstacle. You just want to get away from the problem or avoid a conflict. You will only succeed if you do not give up the “sword” to the rival. In some cases, the biggest obstacle is that you are afraid of the future, not competition. If you’re not careful, you might miss some great chances.

This card often refers to a lack of self-esteem and courage. In such situations, you have to find the strength within you and believe that it is still able to overcome obstacles. Do not allow others to scare you or exploit you and do not forget that you are still “on your ground.”

In tarot The light of the soul of a the 7 of wands is presented with wands that come out of the red flames. The human head is in the flames. In another tarot, this chart is depicted by a young man holding a stick in his hand and by defending himself against other wands that are directed at him as if to attack him. The key word is courage. An astrology link goes over Mars to Leo.

If the previous card, six of the sticks signifies success on a love plan where the environment dives, this would be a sequel to the story. Enemies came to their own moment when they found out that with our marriage or some other love affair something was wrong. We attack here, openly and directly. There is a need to be organized, to make ranks and to simply defend ourselves. The environment wants us to collapse, and it is especially important to embarrass us. If we were a little star for a city to be admired or a whole country now, many people are trying to see the star fall straight into the mud.

One thing is safe. With a 7 of wands, it does not fall easy, even if recovery is difficult if not impossible. This card brings the competition to the love affair. This is a major fight. These are public love affairs. Tabloids who follow every step of the deceived footballer’s mum and just wait when they will attack a poor little journalist to find out that he is a bully, except that he has already been stuffed with horns.

As the card identifies with Mars in Leo, the ability to defend itself is quite large. Here we learn how to get to the end with the mass hysteria that is regularly accompanied by motions. No matter who is right, it is only important that we fall down and smell and defend ourselves.

When a 7 of sticks appears in the opening, it hints that there will be quarrels with either the partner or the environment. If it comes to adultery, be very careful because there is a risk that adultery will be discovered. That is why a pie can literally persecute. It can go so far that they will have to move.

A 7 of Wands symbolizes freedom, independence, learning and creativity. If in some conflicts, be sure to get out of them as a winner. Things will happen in the way you want, you will feel great and all the projects will move in the imagined direction. Unfortunately, you still feel a lack of confidence and you doubt your own estimates, but do not let them do it. Now is the time to take action despite the fear you feel.

If you’ve ever thought about starting your own business now, it’s time to get involved in realizing this project. You are competent and quite ready for this step. If you feel unsafe in that endeavor, work on it while you’re still in the old workplace – so you will be more relaxed and safer to make the steps to this achievement.

Do not hesitate to tell your partner everything that matters to you, although you do not seem to understand the conversation will improve your relationship and be surprised by the understanding and support your partner will show. If you are not in touch, the 7 tells you that you will meet an interesting person away from the usual places you are on, do not hesitate to try something new.

Money will come to you suddenly – you have the value you thought was almost worthless. You will end up with a good amount of money a year. Watch how you invest money.

You worry too much for no reason, your health is really good. Even if you have a health problem, you will be positive in curing it.

You face the fears and fight with them – that will make your process much more meaningful in the future. Overcoming the hard-boiled fears will create completely new perspectives and patterns of behavior, you will emerge as a much stronger character. Explain what you want, do not be modest and get them.

Such a card is symbolized by feelings of powerlessness, inadequacy and inadequacy. When you come up with a 7 of Wands facing you this means you are afraid of the future and there are many obstacles to you that you will not feel endured. Because of a lack of confidence, it is possible that the battles in front of you will be lost.

Remember that you have control over yourself and that nothing has been lost in advance. The card just warns you to overcome your own insecurity and lethargy that they just brought you to successfully overcome the difficulties. Do not allow others to exploit you.