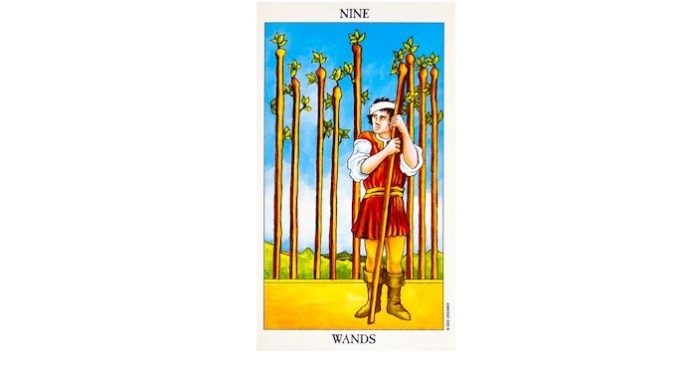 Crystallization of will, strength, ambition, defending oneself and others, dedication, inner strength, sincerity, strong spiritual spirit, healing of old wounds, harmony between conscious and unconscious, achievement, mental endurance are the main representations of this card.

The tarot card of Nine of Wands suggests that we now have the necessary force to perform any task that is apportioned to us.

Perhaps in some situations we feel like we’ve already done our best, and I do not know what’s going on, but with the emergence of this tarot card, our strength is returning again and strengthens our fighting spirit.

Likewise, if we, before giving up certain tasks / relationships, think that we are sinking deeper and deeper, and that our life has become too difficult. Nine wands send us exactly the opposite message – we can still correct things, and now is the right time to start because the circumstances are on our side. The strength that this tarot card brings us is flexible and applicable in all situations, it creates harmony between our conscious and unconscious personality. This is not the power to break, but the wise mind, which has long overstepped the need to praise others with its power. There are many similarities between the nine wands and the Great Arcana of the Desert.

When we interpret Nine Wands as an Independent Ticket, the meaning is very positive in every context of the issue, even in a negative aspect does not speak of evil in action and does not imply immediate danger, but deep sorrow.

Every life experience is a valuable experience, but Nine of Wands speak of very difficult experiences, which have the strongest influence on the development of man’s inner being. Nine wands have a very positive impact on all the cards in the system.

Surrounded by negative tarot cards, it does not lose its positive potential, but is interpreted as only the temporarily bad position of the subject for which the question was raised.

Nine of wands require you to take a stance. Now is the time when you have to express all your strength and courage. Although it does not fall easy for you, you will only achieve your goals if you remain determined and persistent.

This is the last major obstacle to the goal. Stay faithful with your beliefs. Although it may seem that the goal is far away, you have the strength to achieve it. The 9 wands also represent the need to defend your position. You may have to fight for some of your decisions or position. Although your situation seems difficult, you have an edge over the other side. If you overcome the current obstacles, the outcome will be more than successful.

In the opening, this card requires courage and patience. Now it’s not a moment for big changes. The best you can do is to be very careful. If you are in a situation that causes strong emotions, wait a while to calm down before you do anything.

In some cases this card presents some traumas from the past for which you have built a dam around you. This applies especially to love issues. If you have been hurt in the past, now fear of being injured again prevents you from getting close to someone new. You are probably afraid to not be hurt again; Try not to project those fears to your current partner.

At the spiritual level, the 9 wands indicate that you are not ready to step into the unknown. Uncertainty and fear hinder your spiritual progress. You feel like you cannot go back and forth and that’s why it’s important to start overcoming your fears and trauma.

In a reverse position, 9 wands may indicate that you do not defend your views, or you do not defend them in the right way. Mistrusting yourself and your abilities prevents you from taking hold on your attitudes. Fears do not allow you to believe in yourself. Maybe you did not evaluate your opponent well. In some cases, this may mean that someone “grabbed you” or deliberately deceives you.

The meanings of this card can also be related to the fear that you will lose the weakness and the wounds before others. Your current behavior is not a true reflection of what it is. Your moves can be inflexible and rigid. You may have lost a lot of energy on certain plans and now you no longer have the strength to move on. It is also possible that for something you are forced to postpone the realization of the plan until further notice.

In love questions, the reverse 9 wands indicate a dead link. You have the impression that you are in a dead end and that your relationship has no prospects. Do not allow yourself to fall into negative patterns of thinking, or have unreasonable anger attacks on your partner.

The 9 of the wands in the tarot the light of the soul is painted with sticks standing next to each other. Nothing is happening. The picture is such that it can be concluded that the staffs are on the shield pointing to the need to fight. In another tarot this card is depicted by a man who is sticking to the stick while the others are surrounding him. The man is wearing a headband. He is wounded and needs rest, but he does not come to that. The key is strength, and the link to astrology goes through the Moon in the Sagittarius sign.

The Nine of the wands carries the need for peace, but in order to accomplish it, it is necessary once more to go to battle. The unity we encounter has exhausted us so much that we have the feeling that nothing more can be achieved. For years we have been seeking out, struggling, fighting for the naked survival, and when we finally gathered enough strength to get out of it, we now have to go through torture called a divorce lawsuit. This is one of the life situations that perfectly fit into the symbolism of the Nine of Wands.

That’s why the key word is strength. Strength must somehow be collected to win the last battle before a deserved vacation. Man is aware that he can achieve this, that he has enough energy to pass through the target plane. After all, one should not be surprised that a Sagittarius was added to this card. As one of the shifting zodiac signs the strength in it varies. It is never known whether the people of the Moon in this sign are emotionally powerful.

When the 9 of Wands appears in the opening, and the question concerns love, it is quite certain that a person will fight for their marriage or bond or they will fight in the way that the most painless relationship comes out. It all depends on the context of the situation. It should not be surprising if a card appears in questions involving a love triangle. This means that the wafer will struggle to overcome the lover and will most probably succeed in doing so. The key is in despair.

The nine of the wands symbolizes caution, consistency, courage and strength. He advises you to breathe deeply and calm down the inner tensions because there is much to be ahead of you. Do not let it worry you and pessimism overwhelms you; Ask yourself if the situation is really so bad. It will help you wonder what is the worst that can happen and you will see that it is not really that terrible and irreversible. Do not hesitate to seek help, seeking someone else’s help is the strength of the powerful people.

The job situation is tense; keep inner peace and self-control. Nothing that happens is not worth losing your dignity and pride. When the Nine Wands appear, and you worry about whether to lose your job, unfortunately it is possible that this is the case.

Remember that nothing is irrefutable and constant. Try to give the partner space and time, not a period in which you will enjoy each other. None of this is significant, but there is just such a period that will soon come to pass.

Neither on the financial plan do you stand in the wrong. Remember that worries and nervousness will not improve your account. Focus on taking small steps, do not refuse the poorly paid royalties, and agree with a short period of humor.

Stress and worries endanger your health; Mostly the bloodstream system is avoided, so avoid alcohol and nicotine. Drink more water than usual, make sure you perform breathing exercises several times a day. You have to gather strength and put your health in the first place. Staying in nature and exercising will be of great help to you.

It is impossible for you to feel the spiritual peace when you are in action all the time. Run like a “headless fly” that is causing you many internal misunderstandings. Take some time for yourself, listen to music, and at a short notice, take care of the worries and hurries.

This way, the 9 of the Wands symbolize the lack of self-defense, defensive attitude, lack of confidence and laziness. All these features prevent you from making good progress, the card advises you to go and take up for yourself and your attitudes. Your life is your responsibility.