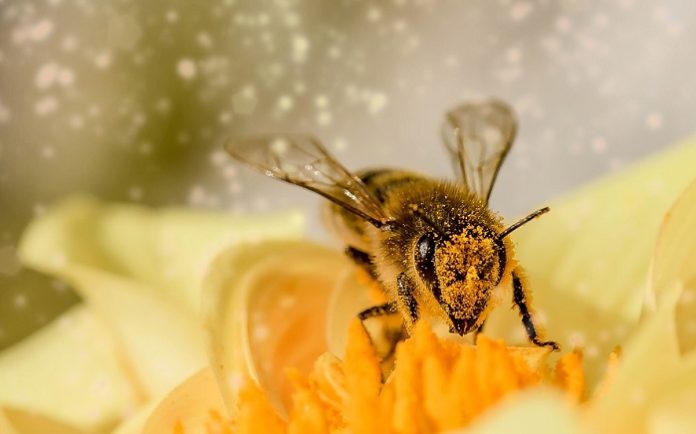 The bee is a very useful insect that also greatly influences people’s lives. The so-called industrious bees not only produce honey but also contribute to the pollination of the flowers and thus the reproduction of flowers, shrubs and trees and play a significant part in nature.

The beekeeper finally harvests the healthy honey and empties each honeycomb with the help of special devices such as the honey extractor. The bee has a positive image, in contrast to the wasp or the hornet, which are considered aggressive.

However, the word “bee” does not always mean the industrious insect. We also like to speak in the general language of a “brisk bee” and mean a pretty and sexy to look at girl. Men also like to call their favorite bee and express a certain pride in their loved one.

As a dream symbol, the bee almost always has a positive meaning – find out more about it now:

Bees are very likeable to humans because they symbolize many qualities that have a positive effect on humans. The bee stands for diligence, orderliness, perseverance, adaptability, sense of community, submission as well as great commitment to the common good. Individual needs are more often hindered by the bees.

Even in antiquity bee dreams were interpreted positively. They were a symbol of luck and success when the dreamer diligently worked for it. A bee sting while sleeping is a sign of a coming change in life. If a girl in the dream world was stung by a bee, this was an announcement of Cupid’s arrow in the real world.

If the bees or a whole bee colony behave remarkably in the dream, this is an important indication for a correct interpretation. If the dreamer is attacked by a swarm of bees, then something in his waking life threatens to get out of hand. If he encounters a swarm of honey bees that is not aggressive, the bees are for many small positive moments in his life.

Sting of the bee in your sleep, this is considered a warning of an injury or as an announcement of a big event or a change in life. A warning of misfortune is also interpreted when the bees sit on the head of the dreaming.

The queen bee can symbolize in the dream that the dreaming feels as something better or special. Perhaps it is also the hope that he wants to be supported by other people in certain plans.

The bee shows the dreaming in the psychological interpretation that he should be diligent, but also warns against self-sacrifice if his own needs are too neglected. Buzzing bees indicate strong nerves of the dreaming, which will help him in dangerous situations.

If the bees are more threatening and their honeycombs are destroyed then there are problems and tensions between the personality of the dreaming and his environment. He has not yet found his place in society and is having trouble classifying himself.

In the spiritual interpretation, the bees are symbols of diligence and order, but also of immortality and rebirth.

A whole swarm of bees is certainly not to be seen every day, as the bees are usually in the hive of the beekeeper and always return there. But swarming is part of the normal procreative drive of bees. Many bee colonies use the abundance of nectar and flower pollen in the early summer months and divide up. Some of the bees remain in the cane and raise a new queen.

The other part of the bee colony swarms with the old queen and forms mostly in trees in the neighborhood a so-called “swarm grape”. However, a bee swarm becomes dangerous for a human only if the bees are hungry or if they are made aggressive by sticking in with a stick.

In the dream to meet a swarm of bees can be interpreted very differently. How, the following article explains.

Bees are industrious insects, which is why they also embody aspects such as diligence, endurance and teamwork in the interpretation of dreams. To dream of a whole swarm of bees is therefore usually to be interpreted as positive from the perspective of the general interpreter of dreams. Standing in the midst of a swarm of bees, without being attacked by insects, indicates that in the real world, one is a person whose company is highly esteemed and close to which one likes to be.

Prosperity is for the dreaming in view when he watches a swarm of bees from afar. Also, this may be an indication for him that a love relationship will consolidate in the near future. From a loose connection can be very soon a close and harmonious partnership.

If the swarm of bees is aggressive and poses a threat to the dreaming in the dream, he anxiously escapes, this may indicate that something in his waking life is out of control.

Everybody knows situations of everyday life that seem threatening to us and which we would like to avoid. Therefore, pay close attention to your living environment. In this context, the swarm of bees can also be representative of aggressive fellow human beings, from whom one feels trapped. If the dreaming of several bees from the swarm of bees, this dream situation can announce a threatening dispute between good friends.

From a psychological point of view, the dream image “bee swarm” points to a highly ambitious and purposeful personality. As diligent as the bees are, the dreaming is also in his working approach. He begrudge himself only a little rest. He is always driven by the claim to have done all the work before he can sit back. Here, theoretically, nothing speaks against it. If there was not the problem that there is always something to work for the person concerned and relaxation is therefore rarely associated with relaxation for him, since he is always in thoughts with the things that are in his opinion, still necessarily to be done.

The swarm of bees also shows the dreaming his organizational talent. Everything he tackles has a hand and foot and follows a predetermined order. He is a person who thinks in a structured way and can bring this ability into a positive team. The swarm of bees, however, can also indicate to the affected person by his appearance in the dream that he should reconsider his actions exactly. Discipline helps to put order in a supposed chaos and to do all necessary work carefully and completely.

The swarm of bees symbolizes as a dream image in the spiritual context that everything in life follows a certain order. Every living being thus forms part of the natural cycle of becoming and passing away.

A warm summer’s day, a gentle breeze blowing as we stroll through a blooming meadow or load a piece of cake onto our plate at the coffee table – and suddenly it happens: a painful sting in hand or foot. A bee stung us, probably because she felt threatened by our movements. Unlike a mosquito, a bee does not care to sting us. Most of the time she even loses her life. That’s why she uses the sting only when she sees no other possibility. The toxin injected at the sting causes our skin to react with redness and swelling to the bee sting. If the stinky person is not allergic to bee stings, they are more annoying than threatening to us.

But what do bee stings have to do in our dreams? Why are we stung by a bee in the dream?

Bees are generally considered positive dream symbols. However, if the dreaming is stung by a bee in his dream, this can be both a good sign and a rather bad sign in the dream interpretation. In order to correctly interpret the dream, the living conditions of the dreaming must be included.

The bee sting in the dream can stand for an unexpected change. Maybe a job change or a move is imminent or the dreaming is at least unconsciously concerned with this possibility. The change can also relate to a partnership or friendship.

Often a bee sting symbolizes unpleasant experiences or events that annoy the dreaming. This is especially true when several bees in the dream rush to the dreaming to sting him. Even a fight among friends can be announced with this dream symbol.