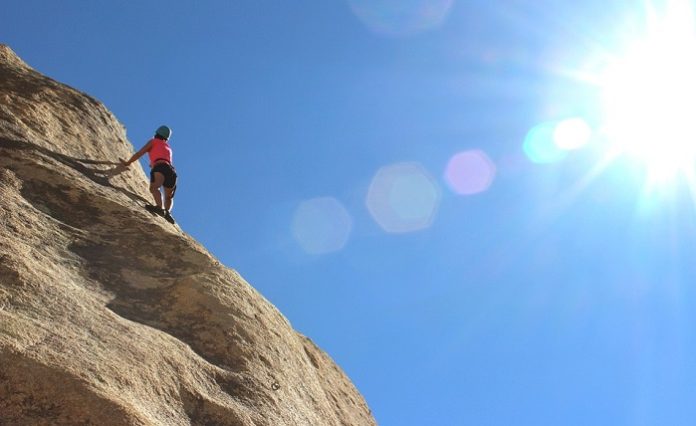 Dreams of the “height” symbol are very common. Many people have dreamed of being in high altitude. The concrete circumstances can be quite different. Maybe you stood in the dream situation on top of a mountain or on a skyscraper and looked at the world under one.

Sometimes the “height” symbol also appears in connection with flying. Height can also dominate dreams in which we suddenly raise ourselves or in which we fly with the help of an airplane, helicopter or balloon.

In addition to the aspect that height can play a role in different dream contexts, the emotions that are felt vary as well. Some people enjoy the altitude and the associated view, while others feel fear. Of course, the latter applies especially to dreams of people who are also afraid of heights in reality.

But what does the dream symbol “height” mean? How exactly do you interpret it?

If you are in high altitude in a dream, you can basically understand this as a positive sign for your own future. The view of the world that lies before you shows that you are well structured in life. The dreaming retains an overview of various developments in work and private life. If he is in the dream on the summit of a high mountain or on a skyscraper, this also shows that he can master challenges successfully.

Structure and organization can symbolize height in the dream even if the person concerned flies far above the earth. In these cases, however, the experience in the dream also has a warning function: you should be careful not to dare too much. The dreaming could overestimate himself and risk a hard fall on the proverbial ground of the facts.

Incidentally, this also applies if the person in question actually falls from a great height in the dream.

Dreams in which fear of heights dominates the situation, on the other hand, represent a low level of self-esteem. Those concerned do not rely on their own strengths, powers and abilities in everyday life. It is advisable that he works on his self-esteem. Otherwise, he threatens to miss important opportunity in life.

A dream of height refers to the psychological interpretation of necessary self-knowledge. The subconscious invites the person concerned to explore the different facets of his personality and to change something in life on this basis. As a result, he can mentally balance himself.

Occasionally psychoanalysts see in the symbol “height” also the longing of the dreaming, to detach themselves from the normality and monotony of the everyday life. He wants new challenges, wants to get to know his own limits.

In the spiritual interpretation of dreams, height is a symbol of the striving of the person concerned to detach himself from worldly things. Only when he becomes independent of this can he develop spiritually.

Vertigo is one of the most widespread fears in our society. Many people quickly become nauseated or dizzy as soon as they are at lofty heights. A high balcony or viewing platform can quickly give you a feeling of panic and / or dizziness; People with a fear of heights then often freeze or sink to their knees, close their eyes, scream and cry.

Such a deep-seated fear can also be found in our dreams. As a dream symbol, it is particularly important if the dream is dominated not only by a stay in a high place such as a skyscraper, a cliff or a crane, but actually by the fear that is felt here. How can this be interpreted?

Basically, a fear experienced in the dream can always stand for a fear that is felt in real life. If the dreamer is afraid of a fall, this symbolizes a concern that he feels in everyday life. He feels insecure and is afraid of “falling off”, of being unable to maintain control and failing. On which aspect of his life this concern relates can vary.

It is possible that there are changes in his partnership that he does not feel up to, or a move or even a baby is planned. The dream could also refer to career changes. It is important, above all, that the dreaming looks at this serene and not in advance already looks at everything from a negative perspective. He does not like the uncertainty associated with certain things, but these concerns are often unfounded in the end.

Another cause of dreams in which fear of heights is felt is the knowledge of having misjudged something, as well as the associated fear of a case that literally brings the person back to the bottom of the facts. He should see the dream as an invitation to deal directly with their own perception and imagination, in order to avoid great disappointments in this way. It will not help to pretend something permanently.

Even according to the psychological interpretation approach is seen in the dreamed fear of height, a real existing fear. The dreaming feels threatened by a certain situation in everyday life and overwhelmed.

In addition, there is often the feeling of powerlessness and panic, even to have no influence on this. The dream should urgently be seen as an invitation, in which difficulty the person concerned is also to seek help. The own subconscious has recognized that the problems cannot be overcome with their own strength, but the dreaming is dependent on the support and encouragement of his fellow human beings. Pride is therefore not appropriate, but rather the admission to have even weak moments in everyday life.

The spiritual dream interpretation sees in the symbol “fear of heights” a sign for unprocessed worries and (possibly emotional) problems, as well as the request, to deal with these.

Dreams of free fall are usually nightmares that go hand in hand with fears.

Dreams of falling or falling into the deep are the most common nightmares, according to several statistics. They are characterized by the fact that the dreaming is in a situation of free fall, a crash that he himself cannot stop. Nightmares of falling are not uncommon because their occurrence can have many different reasons. All have in common is that it is a situation in which the dreaming has the feeling of losing control of something or have lost. It is a general expression of fear and helplessness, of being at a loss and losing control.

Dreams of falling are characterized by a seemingly endless case. Although this is common to all trap dreams and is the main characteristic, there are different types of case. Classical is the endless fall from high altitudes, which is accompanied by a sense of fear. This fear is based on the powerlessness of the situation and is reinforced by the fact that the case could end with a hard serve.

Falling dreams cannot be talked of when it comes to classic falling or stumbling. These have, just like the slipping, a very different meaning, which is more in the area of ​​an acute and fast passing problem. The deep and free fall on the other hand is of long duration and is almost always accompanied by very strong feelings of anxiety.

The fall into the deep, a bottomless pit or a precipice, is one of the original fears of man, after all, the impact on a fall from high altitude for the human usually associated with serious injury or death. Man can hardly intervene in a fall situation, he completely loses the power and control over the situation and himself.

From a psychological point of view, free fall dreams are interpreted in most cases as a sign of low self-esteem and general fears. The dreaming finds himself in a situation that he believes he cannot handle alone. He has doubts about his abilities, coupled with the fear of failure or failure. It may also indicate that he is literally losing ground under his feet. This feeling very often arises in situations of loss, be it the loss of a loved one or the loss of his job or the fear of losing him.

Falling dreams can also be regarded as warning signs. Nightmares of the deep fall often also caution, for example, the proverbial arrogance that comes before the fall. Perhaps the dreaming should question and rethink his behavior and thinking in certain situations, so that he is not dropped by others and thus either loses friends or cannot finish an important project without the help of others.

When interpreting a nightmare of falling is also important to consider whether it comes to the final impact and if, how this looks like. A hard killing may mean that you may not see a way out of the current situation. The impact may be that the end of the situation will come and, in a figurative sense, break your neck. Alternatively, it can be interpreted as meaning that the triggers of the fall dream can spontaneously dissipate and disappear. Death stands in this interpretation as a symbol for rebirth.

When the fall ends in the water, the dreaming dives into the element of life. This can be interpreted as meaning that he is in a hopeless situation, but survives it and, if possible, emerges stronger as a new person. It does not always come to impact. Whether landing or not, it is always a good sign when the deceased can open a parachute in the dream. Opening a parachute symbolizes strength and courage. The dreaming recognizes possible solutions to his situation and is willing to overcome them. A fall-dive with a parachute therefore usually means that the dreaming is determined to overcome his fears and to master his life.