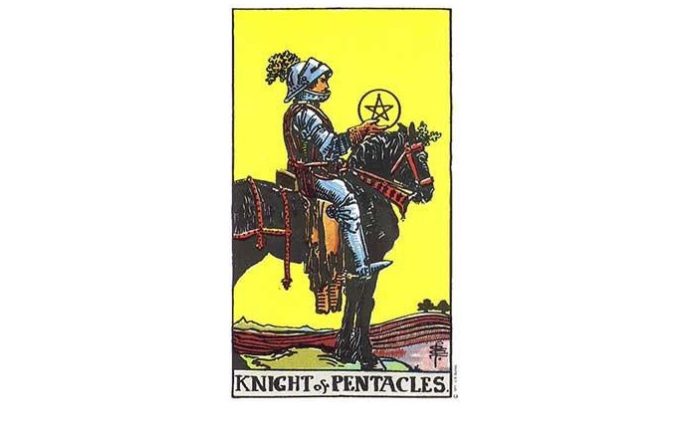 Message and Interpretation of Tarot Cards

The Tarot Card The Knight of the Pentacles has been showing his aspiration to independence since his early youth, he wants to be free from parental influence in his life choices. His prominent individuality of the environment is sometimes misconstrued and comments as excessive ambitious and self-reliant without cover, and people often do not recognize the potential of this young man. He mentally and physically matures considerably faster than his peers under the dominant influences of other elements: fire, water or ray. He is intelligent and reliable, in the tarot represents a clear and steady course of action.

The Tarot Card The Knight of the Pentacles is a symbol of the air aspect of the earth, he is trustworthy and capable. Its first auxiliary function – opinion (air) is well developed, but what is disturbed is the lack of patience. As the Knight of Pentacles want to realize their ideas as soon as possible, he moves to their realization without detailed elaboration of the strategy.

The result of this is the mistakes that make him angry, but he does not give up on the goal, he learns the mistakes. What gives him another element of air is the ability of deep and constant concentration when he needs it. With solid and sustained focus, it can achieve almost everything.

Its dominant psychic function senses (all) the experience, and its thinking analyzes and systematizes it. Has a great memory. Material things are of utmost importance, but not in terms of enjoying their beauty, but in their power. He is interested in powerful machines and all technologies designed to carry out heavy and complex work, and it points to his subconscious desire to increase his (physical and psychological) strength.

Sometimes it may seem too stubborn and tedious to be overwhelmed, so it should be a little harder to move forward.

The Knight of the Pentacles has strong expressive mental qualities of a rational type. He consciously abstains from an open emotional display, but nevertheless, he cannot be happy without a person who would be his companion and follow him in all that he is doing in his life.

If in the tarot reading the Knight is not a person, but events can then be expected that the situation, despite the sluggish movement, will develop in a positive direction.

The knight of pentacles is by its nature a worthy worker. He is extremely practical and fully dedicated to the details of what he does. In fact, his self-confidence depends most on the level of his practical knowledge. It is only focused on its productivity.

The personality of Knight of Pentacles is simple. He sees reality on the basis of what he can see and do. It is not burdened with unrealistic expectations. He is a man who believes in the cause and effect of law. Although sometimes considered dull, he is only very valuable.

Once the target is set, it will not stop until it reaches it. Its unwaveringness combined with its practicality makes it a man who has a solution to every problem. He is a person of trust, making him a great friend and a good worker. He is a veritable lover and loyal friend.

In matters of financial nature, Knight of Pentacles usually represents a successful endeavor on which you have worked hard. This project is likely to develop slowly but surely. Money can suddenly and unexpectedly arrive. If you take care of the property, the outcome will probably go to you in favor. Commitment to business will provide you with financial security. In some cases, Knight of Pentacles can represent a business trip.

In reverse, Knight of Pentacles can point out unexpected craftsmanship. You may be faced with work-related decompensation or new obstacles you did not compete with. In matters relating to money, Knight of Pentacles indicates problems that can seriously undermine financial security.

The vitally pentacle also represents a lack of inspiration or imagination. Too much practicality kills creativity. You may be holding too much rules; you need to think out of the established patterns. Sometimes this card indicates badly planned things or irresponsibility.

This way the card of the Knight symbolizes the loss of focus, lethargy, lack of energy and bad news. Your addiction to other people is hindering your personal growth and development, there is no real obstacle to becoming independent. The card alerts you to your cruel attitude towards others, people from the surrounding area will be distrustful of you. It is important to visit your doctor in a timely manner.

In the end, the reversed Knight of Pentacles can represent depression and lethargy. You are probably dissatisfied with the job or think your work is thriving.

The Knight of Pentacles in the tarot The Light of the Soul is painted by a middle-aged man standing in the trailer. He holds firmly in his hands. Hair color is good for the environment, so dark brown. It is the color of the country that this card belongs to. In another tarot cave the knight is shown to a relatively young man sitting on a large workhorse. Unlike a knight of sticks or swords this horse is static. He holds a big disc in his hand. This is a person who works very hard to master this element.

As far as the love plan is concerned, this is a person who is doing a lot of work and simply has no time to dedicate more to the weaker side of life. Unlike the previous chart, the attention of Pentacles where a girl is still trying to have a social life here is little effort. The person is totally devoted to building life and the sea, but also wants to be marvelous. No doubt this card has its advantages.

First of all, it carries material security. It may not always be a great deal of wealth, but what is in it can count on it. This is a person who is in a position to care for those he loves, and this is usually a bit of a thing. Reversed Pentacles as well as all other court cards belonging to the country’s element are prone to discrimination. This man is hard to satisfy. It is very critical of itself and of others. It’s very quiet so it takes an entire eternity to get started, to fall in love. Once this happens, she remains faithful.

When a hollow disk appears in the opening, it points to a few things. First, if the question of a new relationship is answered, the answer is positive. A person will probably be born in the mark of Taurus, Capricorn or Virgo with the Virgo predecessor. If it does not, an important point or planet or something else will be placed on its birth chart in one of the characters listed. Secondly, it will slow down slow motion, slow speech, the whole will be slow. Third, the tarot advice is to break the monotony. That means you should talk about everything except the job.

Knight of Pentacles symbolizes the power, courage and pragmatism. When it comes to warn you of the fact that you have to rid yourself of your fears and that in some elements of character you must defeat yourself. Now you are in a period when you have the strength to defy negative emotions that impoverish your ability to govern your own life. It represents a degree of awareness in which you will master your own emotions. The main message sent to you by the Knight is to try about small things, because only they will sit in their place.

At work you will progress, and if you are thinking about starting your own business now is a time of wide possibilities and your high competence. If you are looking for a job, it is almost certain that you will find it, now it’s time to “shoot high”. It’s not the time to stick with the “rulebook” formulas, use your imagination to solve your business tasks.

It is important that you are aware of the fact that love is not just wine and rose, but that an essential part is commitment and responsibility. In relation to a partner, not everything can be reduced to pleasures and pleasures. Your relationship is your relationship and you are responsible for it, which means that compromise is something you should not neglect in any way. As a result, the relationship with your partner becomes supportive and open. If you’re not in a relationship it’s a great time to meet new people.

Knight indicates the period of inflows of finances – a possible increase in the work, the succession of the inheritance, or a gain on the lot. Keep in mind that you do not invest more than you can lose.

Think about marrying and leaving bad habits. Make up for the lack of sleep and pay more attention to the right diet.

This card tells you that you are spiritually stronger than you think. Any change you now make will be a big stake in the future. Do not give up darkness and ignorance, use your potential.

This way the card of the Knight symbolizes the loss of focus, lethargy, lack of energy and bad news. Your addiction to other people is hindering your personal growth and development, there is no real obstacle to becoming independent. The card alerts you to your cruel attitude towards others, people from the surrounding area will be distrustful of you. It is important to visit your doctor in a timely manner.