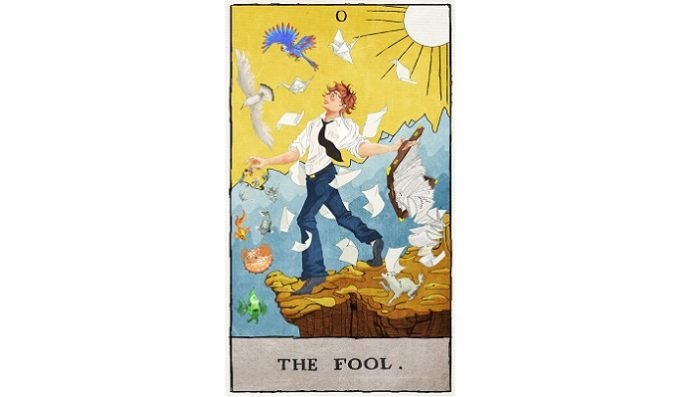 The symbolic language of the Tarot opens the access to the soul world. The Tarot interpret is a fascinating interplay between viewer and map image. Their individual reaction to a motive is as important as the mystical knowledge of interpretation.

The meaning of the tarot springs from the ancient knowledge of the secret societies and mystery circles. The fool, the world, the high priestess, the swords, the staffs, the coins, the goblets – every Tarot symbol speaks its own language.

Today, millions of people use the Tarot to get answers at random through random card constellations. For deep spiritual insights, it is important to be able to interpret the tarot in order to recognize and translate the propositions of the 78 prophecy cards.

To date, many stories and speculations about the emergence of the Tarot. Many think Tarot comes from Ancient Egypt or from the mystical island kingdom of Atlantis. Others suggest that it originated in the Jewish Kabbalah or that the maps of the Sinti and Roma reached Europe. The symbolism in the Tarot seems to be influenced by Greek and Indian philosophies. There is also talk again and again that Moses brought the tarot to Palestine as a dedicated high priest.

It can be proved that the first tarot cards appeared in 1441 at the court of Milanese Duke Fillippo Maria Visconti. It was not until the 19th century that evidence of an esoteric interpretation of the Tarot symbols was found. It was a time when occultism and divination flourished. In western cultures, the tarot experienced its boom in the 70s and found worldwide distribution. Since then, a host of new tarot standards have evolved.

Meanwhile, more than a thousand Tarot variants are known, of which several hundred are offered in the trade.

How is the tarot deck structured?

A tarot deck consists, with a few exceptions, of 78 oracle cards, which are divided into two sections. The Great Arcana with 22 symbol cards and numbered trumps from 0 – 21 and the Small Arcana with 56 cards (4 x 14 cards), divided into the four color series discs / coins, swords, staffs and goblets. Ten numbered tarot cards classify the colors and contain the queen, king, jack and knight court cards. The assignment of the four elements earth, water, fire and air to the four colors is a key factor in the Tarot interpretation.

Observers consider the rediscovery of the tarot and its content qualities to be sensational. The Tarot is understood in almost every country as a mirror of the self and serves the self-experience. Today, there are a variety of different applications and laying systems. For example, with a large display, you can see turning points within a year. The Tarot Day Card answers your question by suggesting the next step. The tarot symbols in connection with the personal interpretation yield the concrete tarot meaning.

The symbol cards of the Great Arcana describe crucial stages of life and important events. They show you topics that you are currently working on intensively. These are motifs that reflect your soul and appeal to your subconscious.

The 22 cards begin with the number 0, which embodies the fool and forms the starting point for the “Journey of the Hero”:

The fool represents on the one hand the childlike, on the other hand, the cosmopolitan. The tarot cards magician, ruler as well as the high priestess symbolize protection and leadership. These cards also symbolize the learning of the opposite. The hierophant is a symbol of learning and growth in the Tarot. The cards give the hero the knowledge he needs for his long journey.

The Hero expresses in the Tarot meaning the end of the hero’s childhood. Now the hero is moving further out into the world just as people go on a vacation trip in real life. The other cards in the Great Arcana through to the “Court” represent victories, defeats, or purges in Hero’s Battle. The death in the Tarot is not the same as the end, but stands for changes in the outside, which lead to inner balance.

If the hero overcomes the obstacle “court”, he has arrived at the goal, which expresses the card “the world”. At the end of the journey, the inner and outer powers of the hero resonate harmoniously – he is perfect. Unlike other card oracles, tarot cards do not reflect the exterior, but show the inner world, the experience and the emotions. The Tarot describes, especially in the Great Arcana, a path with tasks that will lead you to a fulfilled, happier life.

“The Fool”: What does the tarot card show?

Playfully and elated, a handsome, beardless youth prances through a mountain landscape. With his soft facial features and colorful, floral patterned garb, he might as well be a fool. As a cheerful companion, a little white dog jumps cheerfully next to his master. The sun shines over the scenery in a friendly way. All right – right?

In fact, the fool is in great danger: in the most beautiful “Hans-look-in-the-air” man, he walks straight on to a steep abyss. One, two steps further, and he plunges into the depths … where the fool could break anything, including the neck. So what does the dog do? Does he really just want to play and, if necessary, crash with his master – or does he perhaps bark at the fool warningly in order to barely prevent the worst?

As a day ticket: If the Tarot picture “The fool” stands for you

Now you get – in love or professionally – the chance to spontaneously try out new things or even start anew. And that gives you a lot of momentum and confidence! With a lot of imagination you free yourself from narrowing old constraints. Your dreams give you wings – but they can also obstruct your view of the realities of life. So be careful, check to see if you can really find a way that suits you and that you want to go on for a while. Do not go too far! Maybe your plans for life will have to mature for a while?

With the Fool, the first card of the Great Arcana, the journey through the great secrets of life has just begun. He is like an unsuspecting child who still has much to learn. On his walking stick the fool carries a bundle with him. This hides the tools for a successful future. What could that be? This tells you the following tarot card of the great arcana “The Magician”.

The sun is shining, the sky is cloudless. The fool in Tarot not only stands for curiosity but also for the child in us, for naivety and carefreeness. The fool has yet to make his experiences in life. He is at the beginning of a fantastic journey.

The fool is an encouragement and a warning too. An encouragement to give room to his curiosity and courageously take the journey to the goal of life. He symbolizes, so to speak, the enrollment in our school of life. But it also warns us of abysses – the farther we go, the bigger our goals, the greater the dangers.

Esotericism is always about finding the divine in oneself. … To find one’s higher self and that is not in the outer world but in our inner being. The fool in Tarot also introduces us to the secrets of mystery cults and secrets. Tarot is not only about the interpretation of the future, but also about the initiation into profound esoteric secret knowledge. At first, the fool knows nothing of his hidden magical abilities. He does not know that he has the power to shape reality according to his true will. But here, too, there are abysses and dangers that might well be considered.

As the Love-Red: If the tarot card “The Fool” stands for your partner or your relationship

Yes, with its fresh, carefree nature, your dream prince is a real godsend! It spreads day by day lively optimism, enchants you with his childlike innocence, the white rose of his heart … But sometimes it’s you probably slightly too naive to careless and carefree. You feel like he’s just too immature for a longer-term relationship. Give him a chance, he can still develop; But be prepared, that you probably have to play the role of the faithful puppy at his side quite often, which protects him with warning barking from the wrong paths and abysses of life!

The fool is the first of the trumps of the great arcana in the tarot, it is marked with the 0 (0 = egg, new beginning, beginning and 22 represents the end of the journey through the great arcana.). The fool’s tarot card counts as the opening stocking. The fool appears twice in the Tarot, because he stands for the beginning and the end, the original circle of 0 closes, but only to open up again and again. He is the 22nd trump.

The child, the jester, interpretation as a guiding idea -> the fool always wins. If the fool turns up in a laying, then the trained card-reading advisor knows that there is a great but unfortunately unused potential in this matter. The fool is privileged because he is the wise counselor of kings. In the card-reading practice, the fool makes everything possible. He is the naughty face who looks around the corner when fate has struck. You cannot be mad at the fool, even if he can sometimes piss off. He has his analogies to the Joker, in recent understandings of Batman and Forest Gump.

The tarot card the fool also stands for openness and wonder. The fool is the child at the beginning of the voyage through the great arcana, he is the (happy) child, who goes out before our eyes, grows up, gathers experiences, encounters himself, changes himself, and finally changes on the basis of his experiences until he finally becomes a hero, only to end up as a reincarnated child again from the beginning to go through all life and development cycles. A good Tarot fortune teller, or fortune teller, takes into account the fool’s true nature, because he is associated with the star sign Gemini, thus the air and the pure clear mind.

In old regulations, the fool always stands for the lively relationship and spontaneity. The inveterate fortune teller and fortune teller, however, knows that this phase is only temporary in every respect. This is just the misleading in all relationship issues that sit most Tarot card-sitters, namely want to staple temporary relationship situations with the Tarot cards of the big arcana, (usually with the statement: “The cards of the great arcana are fateful and thus unchangeable.), A veteran and wise Tarot ticket finder knows that relationships marked by fools are often based on a naïve belief in the firmness of the relationship of one of the two partners.

These are usually relationships that fool either of them, in which playfulness and madness only benefit one person; the other has to suffer as the fool quickly becomes a sociopath.

The fool stands for amateurism and a new beginning. How skillfully the one with a new start in the job goes around, betray the surrounding maps.

Often, jobs marked by fools are either not long lasting or very restless, surprising and exciting.

If the fool appears as a day or situation map, then these are the following things to consider on that day or for a situation:

One is well advised on that day, or in the situation, as unbiased as possible, and only curious about things reach out. Everything can happen.