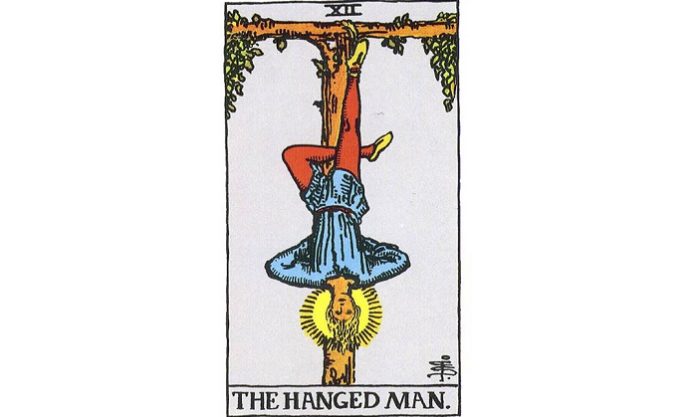 The big arcana consists of 22 tarot cards. These are Roman numerals ranked in the order of 0-21 and are part of the main maps associated with events and influences on the life of a particular person.

They mark experience and give us answers to questions about human destiny. Below we bring you the tarot cards belonging to the great arcani.

“The Hangedman”: What does the tarot card show?

The most important message first: “The Hanged Man” is not a hanged man, so no criminal whom an executioner has strangled as a punishment for his offense – no, he hangs with his foot instead of his neck on his T-shaped, made of tree trunks gallows; and that will not kill him. At most, the blood rises in his head and he sees the world upside down, as long as he remains in this position.

The sky above him and below him is gray and nebulous, but the leafy tendrils that green his gallows tree indicate that his initially seemingly absurd activity is quite fertile. Around his head, the Rider-Waite Tarot even shines with a radiant nimbus, a halo that indicates that the hanging man is coming to great insights of supernatural nature.

Not in vain does the motive of this Tarot card remind one of the crucifixion of Jesus: “The Hanged One” has voluntarily been crucified or even hanged himself here; which would be a pretty gymnastic achievement! He sacrificed himself to make way for something higher.

Incidentally, the old Germanic god Odin, who hung on the world-ash Yggdrasil for nine days and nights and was then initiated into the secret language of the runes, which is still used as an oracle to this day, did the same.

A crucial point, traditionally handed down on the oldest versions of this tarot card, is the crossed leg pose of the hanged man, which yields an inverse four. This sounds a bit like a yoga exercise, which is also not just for physical fitness, but also to inspire the mind. The Four stands in numerology for stability, but also for stagnation and immobility. If you just turn the card over in your mind, what do you see?

Patience and the ability to look at life from a different angle are necessary to put something special in this world, this card tells you.

As a day ticket: If the Tarot picture “The Hanged” stands for you

You hang something in the air today. Take it as an exercise in the high art of being patient!

Decisions that you have been waiting for, are a little bit further afield; so what? Hakuna Matata! Relax and just wait. Because as soon as you start to “wriggle”, intervene and try convulsively to change the situation, the situation will only knot even more.

As a Love Red: If the tarot card “The Hanged” stands for your partner or your relationship

The orientation crisis your lover is experiencing is upsetting all sorts of things in your life together. The heart world is upside down. He confuses you very much, you do not remember what you are doing with him. It’s best if you leave your searching Odum dizzy for a while in peace; At some point he will finish his meditation phase and communicate with you again “right around”.

The name does not initially bode well – who does not know the tarot, may be frightened only once. But the map with the number XII has nothing terrible. The man in the picture is very lively and not dead at all. He hangs upside down from a tree or, like the Rider Waite Tarot, from a branch that is lushly green – but in a very relaxed pose.

The hanged man fully accepts his situation, since he has also placed himself in this position. What we see is also a picture of the god Odin, who hung himself on the world’s ash Yggdrasil and thus made himself a victim. According to legend, he hung so lonely for nine days and nights, and as a reward he received from the ancients the knowledge of the runes and their powers.

So sacrifice or initiation means the picture in this regard – only when that is done, the knowledge opens up. On other decks, the card is also called “The Lonely” or “The Sacrifice”, which is quite true. So one of the messages of this arcanum is, “You have to get through,” or “Accept now what you can not change – things will change soon.” And that’s where the message of the card comes from: a big change. Not infrequently it means that the previous life is completely turned upside down and you perceive much – or even a special thing – differently.

Some things take on a completely different meaning if you take the trouble to change your perspective. Whether it’s trying to see it through the eyes of another person or opening up to new aspects of a matter. Who is in the middle of the action, sees the reality differently than someone who looks in from the outside. There is hardly anything in life that could not be clarified by different ways of looking at things.

One of the meanings is also the withdrawal in the sense of Odin, cut out of life. But unlike the hermit, who illuminates himself in search of himself, the hanged man is filled with light – he accepts things as they are right now and is very conscious of them. He does not seek himself, he seeks knowledge, change, strength, wisdom … but he knows he has to be patient. The calm before great upheavals is another hint of the XII, it indicates the coming of great things. But most of all, she admonishes to shed self-interest and to liberate his mind from material things for the time being.

There is a card showing how the hanged man drops the coins out of his pocket – a logical consequence of his position. It means that in this phase of devotion he does not need something like money or riches of the world. It is also a symbol for removing the fears that are based on the material. By resignation is won. Odin got into the position and was patient, he did not strive and fight during that time, but he received it.

Depending on the question, it can also mean that a certain “sacrifice” must be made in order to clear the way. Those who can not innocently give, can not really receive – he will not see a gift as a heartfelt gift, but the computer in the head. But who builds his life on it, the bottom line will have nothing left that really helps him in the end.

Another possible piece of advice to the questioner might be not to cling to dark thoughts and fears, but to let the mind roam free. Many people rarely lift their heads, either while walking or talking, showing that their minds are not able to roam free. At some point, they have lost this ability, through the worries and burdens of everyday life – or through long mourning and hopelessness. This is a dangerous development that must be interrupted, because life is something that does not stagnate, but continues. The old truism “Life must go on” contains a lot of truth. Whatever has happened, after a reasonable time the head must be raised again and the mind directed to the life around.

Patience is advised – the patience that a good gardener will muster when he waits for the harvest. While he can do nothing but wait, he feels that life underneath the earth and in the seed is not noticeable – without his direct intervention.

So, things change for the one who has patience and the ability to see them from a different angle. Meaning of tarot cards

The tarot card The hanged man is marked with the number 12. The 1 stands for the principle, the 2 stands for patience. A reminder to save strength, so as not to lose yourself in senseless actionism, because the 3 as a cross sum points to the ruler. The 3 is the number of nature, growth and development, but only when the time has come. When the hanged man shows up on a tarot laying, it’s time to rethink, you’re in a bind, you’re lost, you’re in stagnation.

As some tarot or Tarot cards know, the tarot card is sometimes the messenger who announces longer illnesses or even a jail term. The message of the hanged man is often, especially for impatient people, not easy to accept.

A man hangs upside down on a branch, he has no suffering facial expression, more a cheerful, because he enjoys deeper insights, which help him to a completely new view of things. One is well advised to pay the suspended tribute, because everything has its time.

A card fortune teller, or a card fortuneteller who is confronted with the hanged person in relationship questions, finds himself in the situation of revealing to the questioner that the relationship remains at absolute zero. When it comes to the famous question: “When does he answer?”, The hanged man says that the waiting person has to wait a long, very long time for a call that may never come.

Since the tarot card The Hanged man in a sense also speaks of illness, he is just in relationship issues a warning. The range of the hanged man ranges in relationship questions from absolute standstill, to be paralyzed and feeling over the feeling, it makes no sense to overplay this status quo according to the motto; that’s over again, just like the last time, the penultimate time, the previous one, etc.

The hanged man is not a welcome guest in career and career issues. On the contrary, he is the sand in the transmission and the bankrupt vulture, which revolves over the respective business.

Here threatened with hanged long term harsh losses of creeping nature to absolute standstill. The business is sick, the businessman needs a long breath to survive, a plan B or enough funds to survive this phase. Not so bad is the message of the hanged at the beginning of a phase, because here he speaks of the fact that the time is not yet ripe, or advises depending on the surrounding Tarot cards for renunciation.

If a Tarot fortune teller holds the card in his hands as a day ticket, then nothing really gets going on the day in question. A slight infection or bad discomfort is possible. Wise way to approach such a day calmly and postpone important things.

As a situation map, the hanged man brings a sense of resignation over. When asked, this card says you should not let yourself and others hang.