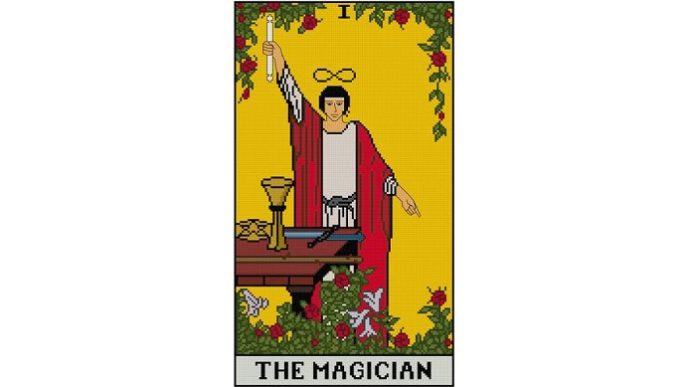 Tarot cards are 78 colorful and complex symbols whose history dates back to the previous millennium. Nowadays, there are more than 10,000 types of tarot card sets. If we tried to explain the essence of these maps, then we would most likely describe a language consisting of ideograms that, when put together in words and phrases, finally tells the story of the person in his search for answers.

There are many versions that refer to the creation of the tarot. For example, the maps first appeared in Europe in the 11th century and were mainly used by Gypsies, the Roma people of India. Another explanatory approach states in a shortened form that the story goes back to the Egyptian theory of wisdom on a 78-card formula.

The 78 cards can be divided into two groups: the big arcana and the small arcana. The big arcana consists of 22 trump cards. They deal with our essential life content. Some tarot card makers only use these cards in their advice. The small arcana (also: small arcanum) consists of 56 cards and is divided into four elements: rods, swords, goblets and coins, each of these elements contains basic astrology and numerology.

Everyone can learn to read the cards – much like learning a new foreign language. The way the student wants to apply what he has learned later depends entirely on himself. Various card games based on the tarot card set can also be found in Flanders (Belgium) and Italy. Almost as if all card games (for example, poker, rummy, bridge, etc.) originated from the tarot.

The two ways of thinking of tarot cards

The first approach is the magic prophetic in which the cards are used as tools to look into the future of the client and to provide answers to specific situations in the future. Questions like “When will I get pregnant?”, “Will I succeed in business?”, “Do I have a good marriage status?” but also questions of existential nature, such as Birth, death etc. can be answered this way.

The second approach is the modern Tarot therapy. This model emerged in the mid-20th century during the New Age period and includes objectivity, psychology, spirituality and self-knowledge. It allows the use of tarot cards as a tool for deep inner experience, as a source of ideas for the solution of fundamental problems and helps to increase the quality of life. The renowned Swiss psychologist Carl Jung was also very interested in the symbolic sign language. He further developed the prophetic approach by improving sign language and incorporating it into psychological therapy.

Over time, the Tarot also integrated the temporal dimension to reflect future trends and developments. Thus, there is the Osho Zen Tarot and the Crystal Tarot but the basic meaning is the same as the classic Tarot.

Know your possibilities, everything is open. This is how the magician speaks, the number one card. The map of the Rider Waite Tarot shows a white-robed man with a red cape. He vigorously raises his staff and points it up to the ground with his other hand pointing down.

Initiates know: “It’s all up and down.” Everything has its correspondence in the cosmos, the law is valid everywhere. In front of you on the table you can see the coin, the sword and the goblet. With the staff, these are all four elements of the tarot that he introduces – actually bringing into play, so to speak.

Above his head we see a lemniscate, the sign of infinity. The flowers indicate living growth. The whole picture is full of activity, the magician seems to shout: “May the game begin!”

He invites the viewer to become aware of his power and move from thought to action. The implementation of the idea is one of the many meanings of the map. From thought to action, from rest to strength. The image also symbolizes the will to realize the self that is on its way, what it carries in itself. Between the purely spiritual idea and the realization stands the magician, he is the link.

He certainly handles all elements and puts them where he finds it necessary. Unlike the previous card, the 0, everything here is purposeful and aware. And so she also asks us to take things in hand and begin the adventure. Whoever draws this card calls out to them, “What are you waiting for, it’s all in your hands, the means to do what you want to do are all within yourself.”

The magician always advises not to rely too much on others. He advises against waiting and shows that it is time to go to action. This is always his answer to questions that concern all situations in life – he fires. He also warns against being over-adjusted and distracted.

In a lost life situation, the message that the magician conveys often comes. People tend to build up their problems like a wall around themselves and, so to speak, condemn themselves to immobilizing themselves. He who does nothing does not do anything wrong. But this only leads to the strengthening of the situation in the negative sense.

People who have long heard that they can do nothing and can not do anything until they believe it themselves should study the image of the magician intensively. He can teach them to others and also warns about the sometimes welcome stagnation. “That does not work, I will not be able to do it” – if you keep saying that yourself, you will not only make a good excuse for an island, but you’ll be more and more lonely. This constantly recurring sentence, which is said to be downright with every little mishap, creates over time a cosmos in which it actually behaves – and in which man is not responsible for his often just supposed failure.

Who asks if a particular idea is to be put into action, gets the answer here. If you want to know if it is time to do something, you will be asked. Where the magician appears, it’s time to act. And most of all, it’s time to become aware of his abilities and powers. Where the fool casually carries his bundle with him on the staff and does not make use of it, the magician untied it and used the contents.

We all carry the four elements and the knowledge about ourselves within ourselves, that’s what we’ve been given. There are people who have denied their gifts for so long that they have forgotten them. How many remember middle-aged or advanced-age skills and talents that have been spilled since their youth, perhaps because they were not wanted, or because there were other obstacles. There are treasures in every human being that he can lift. This is not dependent on age, but on the will and the realization that one has to become active if something is to be achieved.

But the card also gives the advice to acknowledge and respect the will and energy of others – this refers to the somewhat negative aspect of the magician. He also warns against exaggeration, manic work or the idea that you have to do everything yourself, so that it is done.

Everything positive can be turned into the opposite if one loses the measure of things. That’s the way it is, and that’s also true of this card. Those who reach their actual limits accept them. But you also respect the boundaries of others.

In every human there is creative power to be discovered. There are no limits to the mind and not too many to the realization. Tarot

The magician says that everyone can and must take responsibility for themselves and their thoughts and actions, and that everyone has the opportunity to change something in their lives and to make a difference. The card is in most cases an enthusiastic “yes”, provided one does not wait, but is about to do something.

The Magician is the hero’s first station on the great journey through the arcane world of Arcana. The magician’s tarot card carries the number 1, which characteristically stands for the departure, or for the beginning, where everything seems possible.

The magician is the sorcerer, the trickster, the juggler and the sleuth. Probably the most important analogy can be found in Merlin, the legendary magician from the Arthurian legend, but also in Prometheus, who brought the fire to freezing people. If a hunter, or a cartographer in a tarot counseling, gets to do it with the magician, he / she knows that it is a matter of need, such as energy, will, and creative power to move forward in a particular matter.

… this saying could be the guiding principle for this mysterious tarot card.

Note the magician’s staff held up by the magician and the other hand pointing to the ground, an indication that you can do anything you want. Here is an equation hidden, cosmic, universal force + spiritual impulse = matter. For the realization of all ideas stand the 4 elements (coins = earth, swords = air, goblets = water and rods = fire) which are spread on the table in front of the magician, because they are also of great importance in the tarot. The flowers in the foreground of the Tarot card represent the emotional aspect of everything we do. The magician is a fascinating personality, and that’s exactly where his main shadowbanks are derived, because he can also be an impressive liar and blender. The astrological equivalent to the magician is the zodiac sign Gemini, which belongs to the element air and thus to the searching and forward-thinking spirit.

The Importance of the Tarot Card The magician in love ranges from magical appeal to fascination and personality cult. If a fortune teller sees the magician in divination with tarot cards, then caution is usually required. Which in general is in the nature of things, when a relationship has not yet reached beyond the introductory phase. People who are too easily inspired, who have no strong will, run the risk of engaging in a kind of emotional dependency with the magician, because the magician is by nature manipulative, he is looking for his master.

If there is a longer relationship under the sorcerer’s supremacy, then this is never a balanced matter, because a constant friction causes both partners to fight in a kind of exhausting arms race for a common place, on a too small level. Most aptly, the sentence describes, “There can only be one,” the relationship situation that is shaped by the magician. If you want to master a magical relationship, you have to master the trick of giving in without appearing weak and persisting without invoking a fight. Because the magician abhors nothing more than weakness, he does not seek a female / male, but a strong partner, or a strong man. Praise and recognition are few and far between, until they are absent.

Typical trades for the magician are all those who use his multitasking skills. He is an outspoken manager. The magician is innovative, he has an extraordinary power of influence, willpower and a great ambition.

If a professional situation is marked by the magician in a Tarot interpretation, then all skills and qualifications listed here are necessary to survive.

The magician as situation or day card means mastery, a good omen for the day, but only if the appropriate commitment is displayed. You have to recognize the commandment of the hour and act accordingly, otherwise the dark side of the magician will come to fruition.