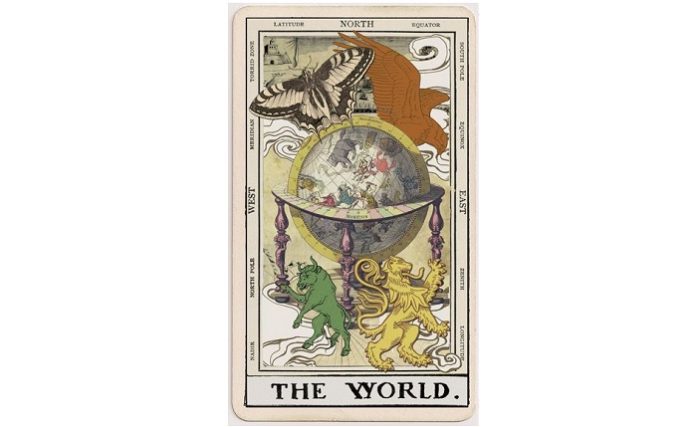 Tarot consists from 78 cards. There are 4 colors, as well as in modern playing cards that came out of it. However, the Court Card instead of three has four cards. In addition, there are 23 cards called trumps, and each represents one symbolic image with its own name. At first glance, it might be thought that such a schedule is arbitrary, but not so. It is necessarily conditioned by the structure of the space, especially the Sun System, symbolically represented by the Council of Kabbalah.

The history of this deck of cards is still not illuminated. Some authorities are trying to find a place in ancient Mysteries of Egypt; others try to move him in the fifteenth or even the sixteenth century. It is, however, reliable that Tarot existed, in its classical form, already in the fourteenth century, because we know the spiers of that time, and since then there have been no significant changes in their form.

During the middle Ages, Tarot cards were widely used for swinging, which was particularly addressed by the Gypsies, so it was commonly mentioned as the “Chergar” or “Egyptian” Tarot. When it was discovered that, despite the etymology of Asian origin, the Gypsies reported theories that its origins were found in Indian art and literature.

The word “tarot” itself is an anagram from the word “taro”, such as: Tora (= Law, in Hebrew). Trot (= gate, in Hebrew), Rota (= wheel, wheel, in Latin), Orat (= speaks, proves, acts in Latin), Taor or Taur (= Egyptian goddess of darkness), Ator (= Egyptian goddess of joy, Heaven and Love = Hator). These anagrams should indicate and associate with the possible meanings of the word “taro” or “tarot”. Others state that the word “Tarot” contains in it the ancient Egyptian words “tar” and “ro”, “ros” or “horn” (royal), and Tarot would therefore mean “royal path”.

Tarot means the principle, essence, law. It is a collection of magical formulas in a pictorial form that contain the secrets of time and the prophecy of eternity. If we remember what Jung said about Tarot’s trump cards, i.e. that these are archetypal images of transformation or transformation, as well as the fact that for the archetypal world or Olam Azilut Kabala, there are no restrictions on time and space. Tarot is a philosophical machine of self-development. He reaches to areas beyond the domain of words and conscious notions. That is the essence and meaning of that.

About him, one of the great hermetists, Frenchman Elifas Levi, said: “Tarot is a monumental and unique work, simply and very much like the architecture of the pyramid and, accordingly, also permanent: it is a book that is the sum of all sciences and whose infinite permutations capable of solving all problems, a book that informs us by what makes us think, it’s perhaps the greatest masterpiece of the human mind and surely one of the most beautiful things we got from the antique. ”

The trump card number 21 has always been a barely dressed dancer with two staffs. Their stage is a sort of oversized laurel wreath, their audience are the four heads that appear on clouds in the four corners of the map.

You may already have encountered the four evangelist symbols on the Tarot card “Wheel of Fortune”, the 10th trump card, where they occupy the same positions as cherubim. But the wheel of fate in the center of the image has now come to rest, life no longer whirls around as a mysterious, confusing network of meaning in front of your eyes. Instead, in the center of the picture, in front of a clear blue sky, you can see the elegant dancer harmoniously harmonizing all the contradictions, tensions and polarities of life with the two staffs in her hands.

The ribbon that loops light and floating around the magical dancer’s body is purple: this is the color of supreme spirituality and cognition, the color of the connection with the divine. And, esoterically speaking, this volume is even more honor than the over-laurel laurel wreath of success and fame that the artist’s world lends to her perfectly balanced life management.

So says this last card in the Chronicle of the Great Arcana: The circle closes. What has been achieved is achieved. All central experiences are made. All elemental forces and possibilities were recognized and integrated into their place in existence. You are the best you can be now.

Today is a very special day! All the trials that have kept you alive for the last time, you have passed with flying colors; or you will pass it now. And these are not gifts from fate, you’ve worked it all out for yourself. Because you were ready to share beautiful moments and not let unbounded by difficult situations. As a reward, you will now experience a real glory of your own – just enjoy it! There is nothing more to do right now. You have arrived.

As a single, right now, after a lot of heartache and confusion, you could finally be joining the person who is serious enough to become the man of your life. If your partnership has been around for some time, you are now experiencing an extremely happy, golden moment on your common path. On many ups and downs, your love has matured. You have balanced each other and brought you into perfect harmony. You can build on that!

Unification of polarity and balance. You are the creator of your own universe. Now you have your life in your own hands.

The world in the Tarot is a symbol of the completion of the awakening. The main void of the great arcana begins with the fool and the beginning of his journey and ends with the world in perfection. Only when we are in balance with ourselves can we unite the polarities in our environment. The tarot card the world shows us the reward that awaits us as we expand our awareness according to the hidden life school of the Tarot.

In the center is a young, naked woman dancing with two polar rods – she is the world dancer, who radiates harmony and happiness through movement. A violet ribbon winds gently around her body. The color violet is the strongest spiritual color and a symbol of the connection with the divine – the crown chakra.

Two staffs in her hand – symbols of the polarity of the world that harmoniously unites the world dancer. She is self-aware of her abilities and powers and creates balance in her universe. She knows that everything and everything is somehow connected with each other and that her thoughts and her consciousness contribute significantly to the great creative process of the universe.

Around the dancer an intricately braided wreath with red lacing – The living earth, which limits us at first but can be extended and enlarged by our expanded consciousness. In order for us to be able to change things that affect our environment and our life situations, we first need to expand our consciousness. We have to believe that our current limits only exist in our imagination. The moment we manifest our possibilities, improved living conditions, and positive things into our consciousness and self-awareness, the universe begins to expand around us through our own actions and coincidences and new external influences.

Around the wreath are the four archangels of the Apocalypse, representing the four elements that hold our world together.

When you place cards with the Tarot, the world is an indication that our consciousness has reached a level that will significantly improve our situation. It is the card of commendation for a successful change in ourselves. The longed for is no longer just a wish in our imagination but becomes tangible and real.

The Tarot Card The world is the last trump of the great arcana, it is the final stop on the hero’s journey. On the Tarot map the world is the 21 to see. The 2 stands for the intuitive way, the 1 stands for new ways. The checksum 3 stands for good prospects of new developments, with the armory of all experiences, this time easier to travel through all the trumps of the great arcana, to new fertile fields. A journey that starts over and over again. The Importance of the Tarot Card The world ranges from arriving, finding their place in the world, to the happy arrival in the new paradise.

A tarot sorter, or a tarot keeper, sees the happy completion in the face of the tarot card The World in Card Making. The world, in a figurative sense, means traveling, it also means emigrating. Good news is to be expected in the face of the world, to keep some things open and happy to be available. Everything comes in flow.

When divination with tarot cards, the world at the beginning of a development means curiosity that is gratified, in the middle part, good prospects for a happy ending and in the end the world is the happy ending itself, but only at the respective level. In general, the world offers super-cheap conditions for everything that makes up life.

A tarot fortune teller, or a tarot fortune teller, does indeed interpret the tarot card, The World, positively, but it also depends on the position in which the card is dealt. The world continues to be a working marriage, but also not to shut out the world and be open to new things. Both partners are in harmony with each other and enjoy a very special happiness.

In the Tarot card The world sees a savvy card reader and a savvy card reading also the vocation. The world embodies everything one could wish for in the profession. The interpretations range from long-term success, to extensive global contacts, to good earnings.

Moreover, within the quality of the world, the questioner enjoys a very good reputation.

In the old day:

Anyone who has drawn the world as a day ticket when playing with tarot cards, can be happy, because this day is very positive. Everything that has to do with travel and activities of all kinds is very favorably influenced, including also changes of location in the sense of relocation.

Somehow everything succeeds in the world day. As a situation map, Die Welt says that one can suddenly grasp everything with a super-clear logic. Things that have always stagnated or gone completely wrong, are suddenly feasible due to changing perspectives. You could embrace the whole world.