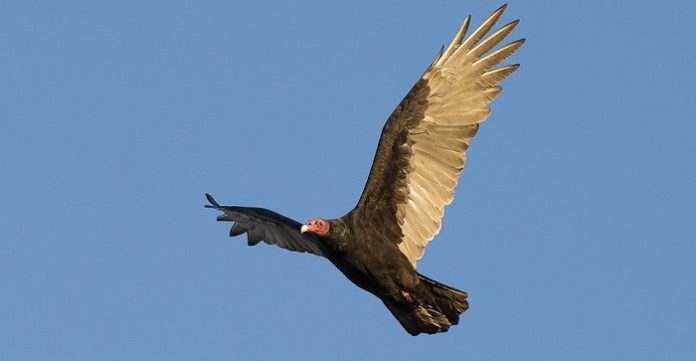 Turkey vulture is one of the biggest birds on the planet. This magnificent bird inhabits North America and some areas of the Caribbean. Turkey vulture belongs to the family of Cathartidae and it is usually called the New World vulture.

The reason why it is called the New World vulture is because it has nothing to do with the Old World vultures that inhabit Europe, Asia and Africa.

Turkey vulture is a scavenger and its symbolism is mostly influenced by its behavior.

People worshiped this bird and feared from it at the same time. The symbolic meaning of this large bird depends on the culture and people and can differ in some ways.

Totems and spirit animals guide us through life and teach us about ourselves. They are good representations of our character and our main traits. We can learn a lot by simply looking at animals and by studying their behavior.

Sometimes their reactions are easier to understand than peoples, since they are guided only by their instincts to survive. Our ancestors believed in power that nature had over us since we all came out of it. They worshipped everything that was created by Mother Nature and feared the natural elements more than we do today.

As a spirit animal, Turkey vulture is best described by these words:

Turkey vultures as totems have a specific type of influence on people who are protected by this bird. If your spirit animal or totem is Turkey vulture, you are most likely a very confident person who knows what respect and loyalty are. You are extremely loyal to the people you love and you would never do something to harm them.

Their lives are equally important to you as your own and nothing can make you see them in a bad way. This is especially true for those who have families, since children are the number one thing in their life.

Turkey vulture is also a symbol of seriousness and unconventional behavior. You tend to be a little bit different than other people but you don’t act foolishly. Everything you do includes careful planning and you would never do something carelessly. Your career and job are very important and you show your skills through hard work and dedication.

Nothing can mess up your desire to be the first and the best in everything you do. Even though this might seem a little bit of putting to other people, you only do this because it is in your blood to be competitive. People guided by this spirit animal have a very big chance of making something great out of their lives, because hard work and effort is what puts them in the front line.

People guided by a Turkey vulture totem are also patient and perceptive. Nothing can pass by them and they are very well-known for being at the right place at the right time to cease a valuable opportunity. Their ability to evaluate the situation and make the best out of it is what makes them more successful than other people. Tolerance is another trait that is very important in your life. You are able to put up with a lot and still keep a cool head.

This helps you endure difficult moments better than other people, since you rarely lose your temper over things. You simply wait for the right moment to attack and to show your best self.

People trust you and are not afraid to come forward if they have something important to tell you. This makes you a true friend. You are someone who is always there to protect and give advice to people who need you if necessary.

As you get older, you only become smarter and your wisdom is based on your mistakes and knowledge you gathered in life. You can become a big inspiration to others, if you use your traits in the right way and if you live your life guided by this powerful spirit animal.

As a symbol, Turkey vulture represents strength, perceptiveness, wisdom and seriousness. Since this amazing bird only inhabits North America and some parts of South America, most of its symbolism was created in these areas. People saw Turkey vultures as symbols of strength because of its large stature and huge wings. Vultures are also well-known for being scavengers, which means they feed off the flesh of dead animals.

To tribes that lived in North America, Turkey vultures represented strong totems. They were symbols of high energy, efficiency and the higher powers. Turkey vultures amazed our ancestors with their ability to glide through sky effortlessly and to survive even the hardest conditions. Cultures use air as their ruling ground and everything underneath is their kingdom.

No animal can pass unnoticed by this ruler of the sky, and each and every animal is in danger from it. Vultures amazed people because of the fact that they do not kill other animals. They simply wait for an animal to be killed by something else, and then they come down from the sky to collect their prey.

Because of this unusual behavior, vultures were often seen as carriers of bad messages and even the as the death carriers. Herodorus Ponticus wrote that important people throughout history were always glad to see cultures above them, since they were the least harmful animals of all. So even though they appear when death is near, vultures are in a way symbol of kindness and good. They never hurt any other creature, while birds like hawks and eagles do so.

Greeks would often use vulture images and representations in their early shamanic rituals and religious ceremonies. In excavations that were made near the Tigris river by an archeological team of Ralph and Rose Solecki, remains of vultures have been found. Birds were wrapped in something and their wings were well preserved, which indicates that vultures were used in some sort of religious rituals in ancient times.

Overall, this magnificent bird has a lot to offer and her behavior was and remains to be interesting to us. Many cultures worshipped vultures and admired their kind nature, even though death was always something linked to their appearance.

A Turkey vulture in our dream can be a representation of many things. Our dreams are highly complicated and there is always a lot more to be interpreted than we think. Dreams about Turkey vultures can be scary, especially if we consider the fact that vultures are scavengers. They are always near when death is close and we might instantly think that dreams about them are death warnings.

However, dream about a vulture can symbolize something completely different. This dream is a symbol of strength and power you possess that is enough to make something great out of your life. This dream is also a representation of success and something you are about to accomplish. Perhaps y new job position is going to be given to you or you might even think of a great project that is going to bring you a lot of profit.

Dream about a dead Turkey vulture is a symbol of defeating your enemies. You are about to face the people who have been working behind your back to try and destroy everything you worked for. Their actions won’t go as planned and you will end up defeating them miserably.

If you had a dream about a turkey vulture above your head, this dream indicates that something bad could happen to you. This warning sign doesn’t have to be a symbol of death or major sorrow it can simply represent something smaller and less harmful. Perhaps you will hurt yourself by moving furniture or something similar to this. Either way be careful and stay away from reckless behavior.

Turkey vultures are, without a doubt, powerful birds. Their magnificence doesn’t only lie in their appearance but also in their behavior. These amazing scavengers do seem terrifying, but in essence they are the least harmful birds of all. Their link to death and passing of life is still something that defines them, but as spirit animals they have a lot more to offer.

Turkey vultures amaze us with their strength, cleanliness, wisdom, adaptability and many other skills. If you let yourself be guided by this amazing spirit animal, you will go through life proudly and no one will be able to ruin your success.