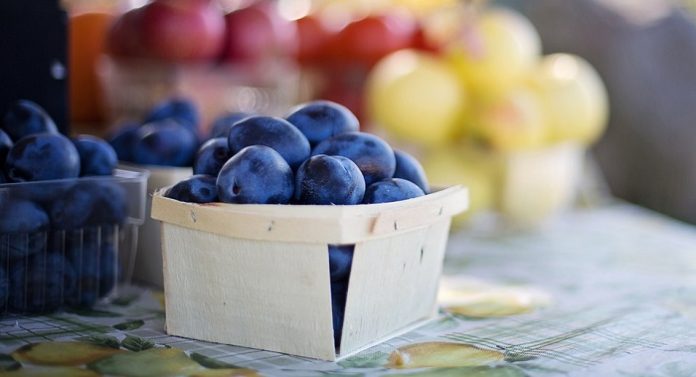 There are more than two thousands sorts of plums. They come in various colors and sizes. We have black, red, purple, yellow and other varieties of plum fruits. All of them are considered very nutritional and valuable to our diet and health. The percentage of their antioxidant value varies depending on the type and place of origin and cultivation.

However, European dark purple plum is usually what we think of when speaking of those fruits. It is used both raw and dried, consumed as a fresh fruit or used in making of various winter preserves, as well as an ingredient for fruit cakes and other desserts.

Plums are commonly grown in Balkan countries and it is often considered a national fruit in those countries. If you travel central Balkans, there is hardly a local household without its own homemade plum jam, compote, marmalade or such.

Plums are especially popular in Serbia, where they are famous for the local alcoholic beverage, „sljivovica“, named after a word Serbian people use for plum, „sljiva“. Beside their usage in making sweets and drinks, plums’ beneficial and healthy properties have been known for centuries.

Juicy, fragrant and deliciously sweet plumes are considered some of the healthiest fruits on our planet. Plums are highly appreciated for their numerous health benefits, coming from their incredible nutritional composition. According to some researches, plums are placed amongst other twenty four of the world’s healthiest fruits. Plums are at the very top of the list. Thanks to their antioxidant properties, they are considered even more beneficial than figs, dates and grapes, all of them having great antioxidant powers, important for our organisms. As studies can tell, a plum is two times more powerful, compared to latter.

In addition, plums are low calorie fruits, but rich in nutrients. Raw plums are great source of vitamin C, magnesium, iron and calcium. It is also high in potassium and has really significant amount of dietary fiber, which is extremely good for our digestion. Plums won’t make you gain weight, on the contrary. They are considered good for regular consumption if you’re on a diet to lose weight. Dried fruits or prunes are also good. They are known for their laxative effect and they contain a great deal of useful and essential minerals. However, you should always be careful with all sorts of dried fruits, because they are higher in calories, due to their sugar content in the first place.

Plums and prunes have that amazing power to increase absorption of iron into our blood. It is very important for our overall health. Their ability to make iron more available for our bodies comes from their good vitamin C content. You know vitamin C is one of the very essential vitamins for our immune system and organism in general. Plums are great source of this precious nutrient. Vitamin C is known to be great immune booster and an antioxidant. It is important for development of various body tissues and rapid recovering from illness. Extra vitamin C, coming from plums, is beneficial for many reasons. It prevents damage in blood vessels, caused by oxidized cholesterol; it neutralizes dangerous free radicals’ effect that is the main cause of some serious health conditions, such as different types of arthritis and colon cancer, for example. Daily intake of necessary amount of vitamin C plays an important role in protection of our cardiovascular health, as well.  Researches have shown it is of great importance to consume fruits with such properties and plumes are high on the list.

Due to their antioxidant powers, plums are considered super powerful natural remedy for bad cholesterol. A particular study showed that consumption of twelve plums a day, for a period of eight weeks, significantly lowered level of LDL cholesterol in patients already suffering from hypercholesterolemia. Similar researches have been done on their impact on overall cholesterol, but there weren’t any notable results. Scientist plan new tests to be taken on animals, in order to determine which components in plums and prunes are the most powerful fighters against cholesterol. The aim of those studies is usage of plums and prunes in more natural reduction of cholesterol in human’ blood.

Plums and prunes are both very well known for their laxative effect. They considered one of the best natural ways to get rid of constipation. Thanks to their content of phenols, sorbytol and dietary fiber, plums are great for bowel movement. Prunes are considered even more beneficial, due to their greater fiber content. Here is an example, just to put it clear. A portion of 25 gr dried plums, something about three prunes, provides 5% of the total daily intake of fiber, which is very good for digestion. It is not uncommon that people with sensitive bellies and very active digestive tract usually avoid plums and prunes in their diet, because their laxative effect could be really strong. On the other hand, they’re an elixir of good health for people with slow bowels.

In addition, plums and prunes are not just a booster for our bowels. They play an important role in protection of our intestines. Thanks to their insoluble fiber content, they don’t allow fecal matter to stay in our intestines for long. With a more rapid removal of toxins and useless material, there comes a lesser risk of developing colon cancer and similar serious intestinal diseases.  In addition, prunes and plumes insoluble fiber make a great source of food for friendly bacteria in our digestive tract. The importance of such high fiber level in those fruits is essential for development of valuable fatty acids, precious to good colon health.

A recent study conducted on animals showed that the consumption of dried plums increases antioxidant capacity of the body and reduces some of the risk factors of colon cancer. It was shown that extracts of plum help to reduce the development and inhibits the proliferation of various cancer cells in vitro.

Some studies have shown consumption of dried plums could prevent reduction of bone density in animals. This information is of a significant importance for scientists and doctors who do researches on improving women’ health, mainly caused by hormonal disbalance. It is shown that eating prunes could be very effective in reducing bone damage in postmenopausal women. A certain research have proven a daily intake of approximately 100 gr of prunes for a period of three months has significantly increased blood markers that prove an improvement in bone density.

Plums are generally safe fruits. But, as with other types of food, there is a potential risk of allergic reaction. Plums contain a protein that is similar to that in birch pollen. Therefore, people who suffer from birch pollen allergy could experience the very same condition when eating raw plums. A local reaction, in form of itching, throat and mouth inflammation, would appear within fifteen minutes after eating a raw fruit. People with such reaction to plums usually can tolerate cooked fruits.

Since plums are known as a great natural constipation remedy, they are good for people with slow bowel movement.

On the other hand, they could cause diarrhea, if eaten too much, especially dried fruits. However, you don’t want to go overboard with prunes for other reasons, as well. They are healthy, but higher in sugars and overall calories.