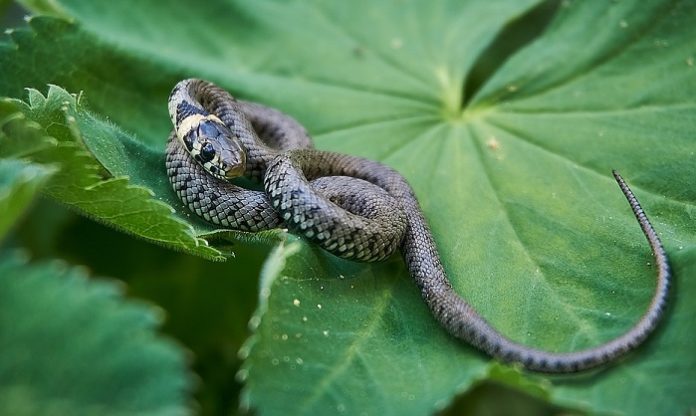 Michelangelo’s snakes in paintings are equally fascinating as anything else portrayed in his work. A lost paradise, a tree of knowledge, an apple and of course a snake. Why did this serpent care so much about throwing out a human race out of paradise? Variations of this story can be found in other traditions and mythologies. Snake is just a very strong symbol in our collective unconscious, as Jung learns, the symbol of the human psyche.

The Bible quite often mentions snakes. It has been calculated that the snake is mentioned a total of 53 times in the Bible. We can say that the Bible almost begins with the mention of the serpent. The first question in the Scriptures was asked by Satan who took the form of the serpent (Genesis 3: 1).

Why did Satan take the form of a snake? One of the features of Satan’s tactics is to be attractive by not attracting people so much. That is one of the reasons he took a form of  a snake. We must emphasize here that the snake, which we know today, did not look like a species presented in the Story of creation.

Satan did not ask of Adam and Eve to taste the fruits all over Garden of Eden. He wanted them to try only at the Tree of knowledge of good and evil. After falling into the sin of our ancestors, the curse was also pronounced upon the snake as it was used as a Satan mediator. Once one of th most beautiful creatures in the filed became the lowest and the most disguisting creature of all.

From that moment, until the end of the Bible, the snake is a symbol of sin and Satan. There are only a few references to this animal in the Bible, in a symbolic sense, which do not imply sin or Satan. The first two chapters describe Garden of Eden, where everything was perfect. The third chapter of the Bible begins with the serpent. And how the snake, that is, Satan through the serpent, came to this stage, there is no explanation. The sin came. The third chapter describes the decline of our ancestors.

Likewise, Revelation 20, chapter 3, from the end of the Bible, describes the destruction of the serpent, that is, Satan (20: 1-2). The “Old Snake” refers to Satan’s fraud in Eden Garden. The last two chapters of the Bible, as well as the first two, are described by Paradise, perfection.

Many people today wonder why God allowed them to develop their flaws and sins. But when people rejected God, they also rejected his protection. People do not suffer so much because God sends distress to them, but because they refuseed to be protected by him. Speaking of the last time, the Spirit of Prophecy emphasizes that more frequent accidents occur because the Spirit of God gradually retreats from the Earth.

Being bitten by a snake is a terrible way of dying. The snakes that attacked Israelites were referred to in the 6th verse as “fiery,” probably due to the pain they had caused their poison that spread to the bloodstream of the victim. There are some snakes whose poison causing inflammation, swelling, but not death. However, these snake nests were deadly. The Bible for snakes uses the adjective “fiery”, which is the same root in the Hebrew language and for the word “seraphim” (fiery, brilliant).

Meaning of snakes in dreams

If you had a dream of a big snake, it is interpreted as a warning to be careful, because in your environment there is someone who does not want you well. Everyone tells you that you need to better at evaluating people to protect yourself against unpleasant situations.

When someone likes you at first glance, give him your full confidence right away. You are angry with those who want you to be the best, and sometimes they roughly tell you what they think. You do not realize that it’s more honest than telling you everything is great, and behind the back they are mocking you.

Dreaming about a little snake

Seeing a small snake in a dream means you will have unforeseen expenses. You are too generous, and someone from the environment will abuse it and cause you damage. It will most likely be accidental, but you are aware that if you give in again this time, people will continue to exploit you. You have to take a stand and let them know what you think.

Dreaming of catching a snake

If you’ve dreamed of a snake caught by you, it implies that someone will tell on you.

Although you do not resent people, you always find someone you do not like. Keep an eye on people who are telling your secrets to others. It is possible to trust your close friends, but there is a danger that the secrets you hide from the public will come to light.

Dreaming of killing a snake

To kill a snake in a dream means you will defeat your enemies. You can breathe because you will finally come out as a winner in all fields. At work you will prove that you are better than the competition and that you deserve to make progress. This dream also means success on your love plan. The person you like will find that you are her soul mate.

Seeing a dead snake in a dream

If you see a dead snake in a dream, you will overcome a crisis or a risky occasion. Perhaps you will come into a risky situation that might be caused by someone else.

It can also mean that you are overly concerned about some of the problems that are bothering you. It is time to start facing your problems and stop running away from your problems.

Dreaming about a lot of snakes

Dreaming of several snakes is a warning sign that you are about to experience inconvenience. Sometimes you tend to tell other people too much about yourself and they can use it against you. Not everyone is your friend and some might even use the things you are telling them to do you harm.some of your words can be taken in a completely different way, which can also cause problems.

Be careful what you say and to whom you are saying it to. Separate people who are your friends and those who are just aquaitances.

Dream about being attacked by a snake

Snakes attacking you in a dream is a bad sign. Someone you love might become terribly ill or you’re your health can deteriorate. Make sure you take good care of yourself and make sure you warn those around you about their health. This is especially important if there is an older person involved.

Dream about several snakes attacking you

If you were attacked by sevral snakes in your dream, this means you have a lot of enemies. Someone really dosn’t like the way you are doing right now, and they would like to see you failing.

Dream about a colorful snake

Some people you consider to be friends do not actually that fond of you, and some of them that you consider as opponents are not that.

Perhaps you have a wrong conception of people and you judge them compeltely wrong. Next time you meet someone, get to know this eprson better and don’t make rash decisions on who is good and who is not.

Dream about a black snake

This dream is announcing a possible death of someone who is very dear to you. make sure you warn the people you love about their health and don’t let them forget about taking care of themselves.

Dream about a gray snake

You will be in a situation where you will be faced with shady pople and you won’t be able to recognize their intentions. Make sure you get to know the people around you well and don’t be fooled with their behavior.

Dream about a red snake

You should not be a diplomat, because it is very difficult to come out as a winner that way. For those who are already engaged in diplomacy in any way, they might be able to make a progress in their lives..

Dream about a white snake

This dram is announcing illness in the family. Fortunately, it’s not going to be dangerous and overbearing. Whoever gets sick, it will be able to recover from it.

Dream about a green snake

You live in an unhealthy environment, you should take care of the hygiene of your personal space like your apartment or home.

You have a person close to your family who is not what they represent themselves to be.

It’s very likely that this person thinks of one thing, and tells something completely different. You need to be cautious about telling family secrets to acquaintances and friends.

Dream about a water snake

You should avoid swimming in rivers and lakes. If you are not careful, you should be more careful as there is an increased possibility of injury.

Dream about a snake talking

If the snake talks to you in a dream, a friend will try to talk to you about something that will not turn out well for you. Listen to the advice you are getting because otherwise you might get in problem.

Holding a snake in your hand

You know the shadiness of your friend. But you also know that his or hers actions are not going to affect your life in any way.

Dreaming about a snake in the forest or a forest snake

You can not recognize enemies among friends. Try to consult with your family about your doubts about certain people and they will help you to solve the dilemmas in your head.