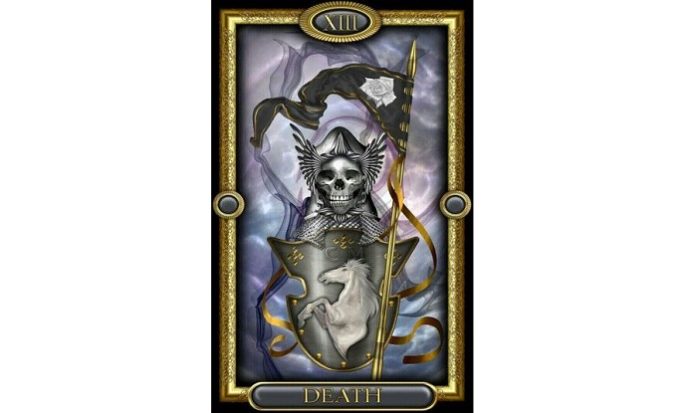 The Tarot Card Death is represented by the 13. The 1 is the act and / or the happening, the fact. The 3 stands for nature, ergo is death happens once nothing bad, he belongs to the cycle of nature. This confirms equally the 4 as cross sum. The 4 is the most stable number, it is the new order, a new reality, yet the 4 is incontestable and uncompromising.

Death has long since lost its horror in our enlightened (western) society, yet here and there it still causes consternation when it comes to Tarot cards when playing cards. Death stands for the dreaded or longed-for end of a situation, but also for the demise itself.

A fortune-teller, or a fortune-teller working with tarot cards, sees death primarily as an invitation to acceptance. The time of letting go has come. The death is not always perceived by us, there are many things that quietly but irretrievably say goodbye to a person’s life.

An initially unnoticed farewell in the circle of friends, opportunities, which are not permanently disappeared, profane things that we lose, the alter ego, phases of life, personality parts, and dreams and forever postponed. When divination with Tarot cards, Death Card reveals that many things can die in a person’s life, including humans themselves, or beloved pets. The Tarot Card Death we often translated with farewell.

It makes no sense at this point to want to hold on to a relationship for longer, there are enough signs that clearly indicate that it’s time to move on.

If you consult a fortune-teller or fortune-teller with professional questions, and death then pops up on the cards, then this means that it may be the chosen path to the proverbially dead child.

The Tarot Card Death as a day ticket involuntarily wakes everyone’s attention. The meaning ranges from the loss of objects, to the physical death of humans and animals.

As a situation map, death in such phases of life simply recommends making room for the new.

Dead man playing, stoppage in the sense of; everything has no purpose anyway, to end something with power, caprice.

Death always means a loss of people, beings, things or circumstances that are dear to us. Such an unwanted separation can indeed be experienced as painful and sad. However, we create the suffering only when we do not allow our feelings of anger and sadness to express themselves in order to discharge themselves.

We also create unnecessary suffering if we do not let our memories of it go, but keep it conscious. The opening to our emotions brings us healing, and a yes to respectfully accepting the experience brings us into connection with our deepest truth. Suffering arises from the NO over the inevitable. We should not try to ward off our pain, but pay attention to it.

A hunter, or a depositor, who is confronted with death in relationship questions when placing cards with tarot cards, knows that it is either the end of a relationship phase, in the sense of -> taking the relationship to a new level. Or the relationship itself comes to an end, which must clarify surrounding tarot cards in case of doubt. It makes no sense at this point to want to hold on to a relationship for longer, there are enough signs that clearly indicate that it’s time to move on.

Everyone is frightened when death appears – the blackjack godfather, who comes to everyone regardless of the person, is not exactly a popular figure.

In the Rider Waite Tarot, he rides a beautiful white horse and bears the mystical five-petalled rose as a banner. This original form of the flower is a symbol of much, especially the mother of the old ways sacred. In the background you can see the sun through two towers … underneath or rising? It remains the same, because this is always repeated.

Before the step of the horse with his rider, who wears the visor open and is completely unarmed, all sink there: dignitaries and kings, mothers and children – nobody can escape. But no person in the picture seems desperate – it is as if he is expected and received quietly.

It is a quiet and not a horrible picture showing the map. And it rarely indicates an actual death. Rather, it’s about the end. One could also say: an end, because the XIII always refers to the termination of a condition or a situation. It is always inevitable – a natural end when the time comes. This could be related to a relationship or to a job, an apartment or a mental attitude.

The time has come for the farewell, it is the natural course of things that can not be stopped. To defend against it would be evil and would not really bring anything. Thus, the reality of “death” can be displaced by habit, but what is the content of a relationship that has long been dead in substance?

Would not it be better to take things as they are and allow something new? Maybe it would be time to change jobs or work.

The emphasis here is always on “it’s time” – so the Arcanum always indicates a natural end to something. And that is not to be considered negative, because in the flow and cycle of life the day follows the night and vice versa. Apart from the material, material level, death points to a profound change in the spiritual or spiritual sense. Nothing stays as it was, and experiences or learning processes that we are constantly exposed to are constantly changing things.

A transformation takes place, or a detachment from something – it may concern faith, the view of things or old dependencies. Often it does not go away without pain and fear … but it has to be that way and that’s what death is all about. The natural course of things does not stop with fear or pain, but releasing old things offers the opportunity for a new beginning.

Many people know that: As a child, you might be completely crazy about sweets that make adults shudder. The time is over, the taste has changed. Who would want to sleep in a room whose walls are papered with a bear and bunny wallpaper in pink and light blue? But even as an adult you suddenly put a box of CDs to the rubbish bin, simply because you do not want to hear this music any more – something has changed and you let go of something that has long been appreciated.

But such change does not announce the Arcanum, it is always about profound and important. It is also an admonition not to cling to the material or even the least important for fear of the new. People who live too much in the past can not see the opportunities that change brings.

They do not evolve, they want to escape the cycle by clinging to the past-past feelings, past happiness, or what they considered it-or long-lost wealth. They fear the loss, they have lost everything.

The big transformer, the converter, is nothing to fear. If you let go, you have your hands free to grab something new. The card does not announce anything negative, but a completely natural change process, or indicates that it would be high on the time. Nothing really dies – what is conducive to our soul remains.

We see on this card a skeleton which is in a knight’s costume. It symbolizes death, which we can not avoid. The white horse, however, is the sign of rebirth. On this map you can clearly see that the war has caused a lot of suffering over the country. Everything is destroyed and the war is over after a hard fight. We recognize it by the setting sun. But the map symbolized by the white rose on the flag and the setting sun, which has survived the worst and we are about to start again.

Even death is a very negative card. If you have drawn this card as a day pass, you will face an end that day. Depending on the question, it can cover all possible areas. It can e.g. Your beloved neighbor who is now moving to another city, or a colleague leaving the company. It is a situation in which we have to say goodbye to an end. In any case, it will be a situation that hurts them.

But death also symbolizes a new beginning that comes after the end. And we should be aware of that. Of course, this card can also symbolize the direct death of a loved one, from whom we now have to say goodbye, but that happens only in the rarest cases. The map, however, never indicates our own death. As previously written, Tarot is just the reflection of our soul. This one is immortal.

Meaning for work: With this card you are confronted with a professional end. But there must be no dismissal from your company. Depending on the question, it can be the change to another department, another activity, farewell to a colleague, or the loss of a longed-for mission. But after that there will be a new beginning. This can e.g. a new colleague, or a new field of activity where you will be very happy.

Meaning for Love: Your partnership is at a low point, but this does not necessarily mean its end. Depending on the issue, it can be a point where you have to completely change your partnership and change your views. If you are a single, you must say goodbye to your partnership ideas. For example, you realize that your dream partner is not interested in you.