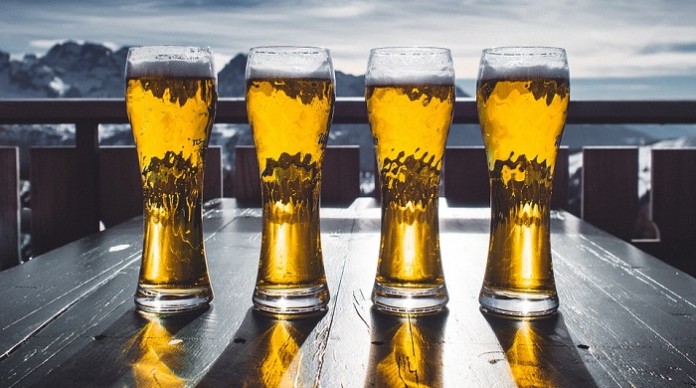 There are several things, which may become worsened with age. Fruits and vegetables may also become moldy after a long period. Breads may also be stale. But, will beer also become stale with the passing of time?  Before discussing that topic, let’s us whether beer differs from wine.

Beer is taken out from some cereals, such as, wheat, malts, rice and also maize. Hops, which are a type of blossom, are the extra elements in beers, which work as preservatives. In contrast, wine may be considered as a different alcoholic beverage, extracted from mainly grapes or fermented juice of grape.

Beer is one of the trendy alcoholic drinks. However, most of the beer lovers do not know- how long does last their beer. In fact, they do not understand whether their beer may go bad over time. There are some significant facts regarding this beverage. If you have stored your beer for a very long period, then it is always essential to make out whether it is safe to drink that beer.

How long can we store our beer?

The right answer for this question is mainly related to the variety of beer. The standard beer, containing in a bottle, if not opened, may last for minimum six months. In other words, after six months, if opened, the bottle may offer you beer with original taste. But, it is possible, only if you have stored the beer in a proper way. Some of the classic beers (ales, stouts or lambics) contain high amount of alcohol. They are intended to remain intact for some years. Actually, manufacturers of such beers sometimes suggest that they must be stocked for minimum one or two years prior to opening. It must allow an aging of beer so that you may have its wonderful flavor.

Many experts have the same view that the beer must be drunk within one or two days. After this period time, though the beer may be fine, its flavor will not be exactly what you have previously expected. It indicates that you should avoid storing the beer, when you have already opened the bottle.

There are some factors, for which the beer may become spoiled:

This is a natural opponent, which may make your beer bad. Do not expose your beer to the direct sun rays because these rays will damage the quality of the beer very quickly.

And it is one of the reasons, for which, most of the bottles of beer are made dark brown colored so that it may prevent the valuable contents of the bottle from light.  Thus, mainly during the sunny days, you have to be very careful about the contents of beer. Otherwise, the taste may turn out to be much terrible. For this reason, it is best to purchase beer, in containers and search for those bottles, which are stored inside dark box.

The change of temperature

Another factor, which may spoil the good alcoholic drink, is the modification of temperature. Beer must be stored at only a particular one temperature all the time. For example, imported beer may be deteriorated within a short time because it possibly travelled across a number of time zones. As a result, it has been exposed to a variety of temperatures prior to reaching your own icebox.

The beer must be stored in a place, which is as cool as possible. In this condition, it may last for a very long time, and there is also a very low possibility of the beer becoming stale. Thus, you have to buy beer, which has been placed on some ice pieces for considerable time period.

It is another enemy, which may make the condition worsened. A bacterium is such thing that none is able to manage and this is present almost in all places. But, a good fact about it is now comprehensible. Beer never sustains any type of bacteria, which may affect your health or kill you in due course. In most of the cases, bacteria are not able to thrive on beer. However, when it takes place, all they may do is breed in the alcoholic drink and generate waste matters.

When you experience a beer containing bacteria, the waste items may be clear on the palate. But, alcohol holds its individual type of the natural inhibitor; this inhibitor may have the potential to prevent the growth of the bacteria.

How to recognize if the beverage is spoiled, rotten or bad?

Before drinking the beer, it is better to know whether the drink is in right condition to avoid food borne infection. You may generally find the answer of the above question when you untie the beer bottle. If you have opened the can, then you must hear a usual sound, which indicate that the beer is spanking new and can be drunk. You must also find white colored foam that rises from your beverage after unsealing the bottle. Lack of froth is a signal, which indicates that the drink has most probably gone bad.

While the beer is kept in some bottles, you may test the bottles before opening them. There are some clues like a dirty container, a faded tag and particularly some seepage near the lid that signifies earlier heat abuse. There are some more potential features that determine the expired beer bottle, for example, modification of beer’s color or sandy deposits visible in its base. If all such things can be found out in the container, then the condition of your beer most possibly becomes bad. The flavor will also be unexciting; it means that the taste has been spoiled.

Many users want to know whether the beer, if left out, can do any harm to them. The beer will possibly be something, which won’t have the fresh taste or may also have a kind of savor that is very sour to your taste buds. When the drink has been refrigerated for some time, it may not turn out to be bad.

While the beer is not in good condition, you may try to look for some alcohol substitutes.

How to increase the shelf life of your beer?

Beer may be stored best, if this is placed in the fridge. It is particularly significant, when it has been bought refrigerated. The modification in the level of temperatures (cold to hot and vice verse) is never excellent for the product, and this is already discussed. In most of beer bottles, you may also see a date, before which the drink remains good.

Beer must be stored all the time in standing position in order to reduce the oxidation procedure as well as to avert the infectivity from the lid. When you have not planned to refrigerate the beer, you have to be certain that this is placed at least in dark cool site at a steady temperature. The beer bottled in dark containers is a better option while you plan to boost the product’s shelf life as they obstruct UV lights, which may corrupt the beer quality.

Thus, now it becomes clear to you that the beer has to be preserved safely to avoid any kind of damage before you have consumed it.