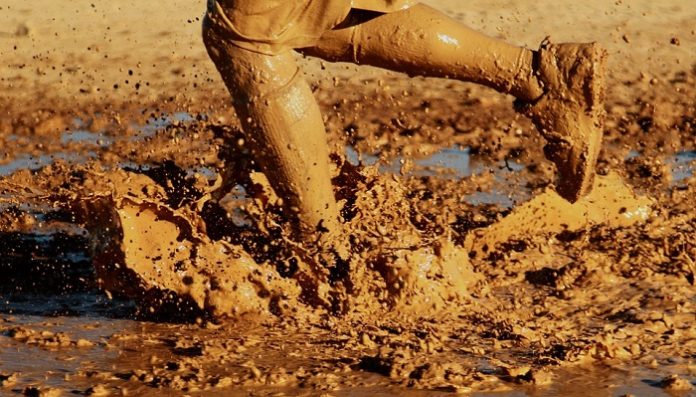 Mud consists of water and earth. Mud can be a challenge for any hiker, for example when walking through a swamp. For others, however, it cannot be muddy enough, because mud has wonderfully salutary aspects in addition to its dirty ones. Even Cleopatra is said to have enjoyed mud baths in ancient Egypt, because mud acts much like an exfoliation and thus ensures soft, well-perfused and beautiful skin. Pure nature – but maybe not for everyone.

Animals, on the other hand, almost without exception love to roll in the mud: pigs prefer to lie in it, elephants and other pachyderms do the same.

On the one hand, the sludge layer serves as a coolant in high heat, on the other hand as insect repellent.

What can it say about us when we dream of mud or a big puddle with a lot of dirt? How does the dream interpretation interpret this dream symbol on the different levels?

The dream image “mud” reflects the dreaming a deadlocked situation in his life reality. Dreaming of being stuck in the mud shows very clearly how hard one tries to find a way out of a dilemma in the awake life.

It is important to calm down and find your inner balance back. Only when you feel support and solid ground under your feet will your head become clearer and you will be able to find solutions that help get things going again.

If one wears dirty clothes in the dream world of gray mud, it means for the dreaming: Caution! Pay attention to who you trust in private life in real life. Healthy mistrust is appropriate. Unpremeditated utterances could otherwise quickly fall into the wrong ears, which in the worst case could inflict considerable damage on one’s own reputation.

However, if you wipe the dirt and mud off your clothes, you will quickly catch the eye of fake friends, thus preventing their attack. Walking in mud means according to the general dream interpretation, one will eventually lose the confidence in good friends.

However, this dream situation can also point to troubled times and / or losses in the family circle.

In the psychological sense, the dream symbol “mud” has different directions of interpretation. On the one hand, mud is a primordial substance and therefore the basis for life and growth.

On the other hand, if misused, there is also a potential danger: you can sink into it and suffocate.

Transferred to the world of the dreaming person can be said that she can only correctly interpret her dream life with the dream symbol “mud”, if she necessarily takes into account their individual circumstances. In heavy living situations, the mud can be a symbol of stress. These make it difficult for the dreaming in life to progress.

In good phases of life, however, the mud refers to the ability of the dreaming, in life to concentrate on the essentials and not to let the “morass of everyday life” in the depth.

From a spiritual point of view, the dream image “mud” stands for the primordial substance of all life. If he appears in a dream, it is an impulse for the dreaming to remember the essential things in life.

Then he will realize that happiness is usually found in the little things and satisfaction starts in himself.

Mud consists of fine-grained sand, soil and organic or inorganic substances as well as a smaller amount of liquid. It can be found at the bottom or bottom of waters, such as in the mudflats, but also on mountain slopes in the form of deposited volcanic ash, which is softened by rain.

The color of the mud depends on its composition. The sediment deposits in sewage treatment plants, for example, give a gray sludge. Healing effect of the mud, which is applied as mud packs on the body. A mudslide that is often caused on slopes by heavy rain can be extremely dangerous. Because of the water, the mushy earth is so heavy that a fallen person can hardly be pulled out, even if he only gets stuck with his feet in it.

If someone dreams of gray mud, he may panic that he might sink into it. If the dream is only a small mud hole, the dreaming may rediscover the childish fun of sculpting and slushing with this adaptable material. For dream interpretation, the context in which the dream symbol appears is important.

The dream symbol “gray mud” is in the interpretation of dreams often an indication that the dreaming in real life has the feeling of being stuck in the monotonous everyday life.

The dream symbol “gray mud” is an invitation to get solid ground under your feet. So the dreaming can move safely again. In the dream interpretation, however, something can be hidden in the gray mud. Gray is the color of the twilight, and many things can disappear even in the silt. The dreaming should be attentive: Maybe he discovers a real gem, where he would not expect it.

Another aspect of this dream symbol is the association of gray mud with dirt and messiness. In the dream interpretation, dirt indicates that the dreaming wants to get rid of something. He may surround himself with dodgy people who harm his reputation and have a bad influence on him. The dream warns the dreaming to go astray. Those who let themselves be guided primarily by their passions and material needs, eventually get into trouble.

However, the dream symbol “gray mud” can also point to physical problems. The dreaming perceives himself as soiled, because he does not feel well in his skin right now. In addition, the earth in the silt symbolizes practical needs, the water contained therein symbolizes the emotions. In dream interpretation, the dream symbol “gray mud” reminds you not to mix the two.

The dream symbol “gray mud” reflects in the interpretation of dreams the ambivalence of human existence. On the one hand, it represents life and growth, but on the other hand it can become a life-threatening danger. The mud embodies unconscious psychic contents, experiences and experiences. They form the basis for the development of a personality, but may possibly bury man among themselves. In the dream interpretation, the attempt to free oneself from the heavy morass in the dream corresponds to the effort of the subconscious to overcome mental problems.

The dream symbol “gray mud” also stands for elusive thoughts and feelings. The dreaming is rather inconspicuous and hardly shows characteristic behaviors. If the morass in the dream is perceived as dirty, the dream symbol in the psychological dream interpretation stands for self-doubt and feelings of guilt. A bath in gray mud, on the other hand, can be seen as a means of ridding oneself of emotional torments.

Gray mud is spiritually a dream symbol for the essential, from which everything else has emerged. Mud consists mostly of soil and is thus an important primitive element that accompanies us throughout life. The gray color indicates extensive knowledge and understanding.