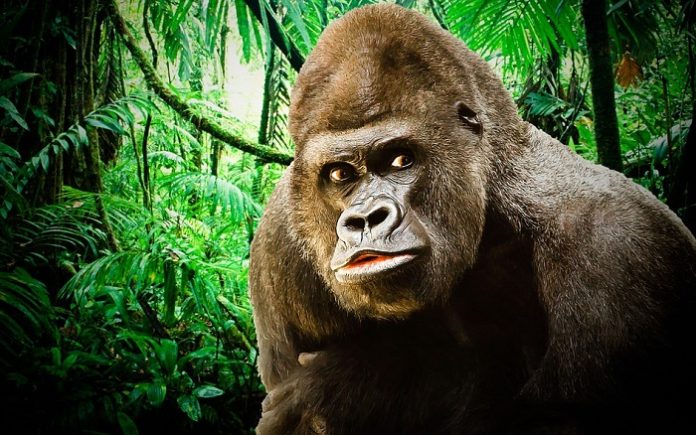 Animal symbolism could seem irrelevant to some people, but it shouldn’t be ignored that easily. Nature can teach us a lot more about the world than we think, after all, we all come from it. Animal behavior is far simpler than human’s, but there are some behavioral characteristics and personality traits we have in common. Animals are there to remind us about the simplicity of life and our interactions, because not everything has to be complicated.

Gorillas are large primates that inhabit only some parts of our planet and they are definitely one of the animals that most resemble humans. Their behavior and even their appearance in general is the most similar to ours, which is why humans have developed a special relationship with them. This relationship is something we have formed with primate’s centuries ago, even though we weren’t always able to get close to them as we are now, because we know them better.

To determine your spirit animal you have to dig deeper into your subconscious mind and figure out which animal has been around you the entire time. Our spirit animals come to us while we are sleeping or meditating, and sometimes they can send us messages or speak to us about things we are going through. Totem animals are determined by your birth date and every person has its own totem animal. Totem animals are there to tell us more about our characters and personalities, and possibly even teach us about hidden aspects of our character we haven’t discovered yet.

As a spirit animal, gorilla is best described by these words:

People guided by the gorilla spirit animal are strong both mentally and physically. These people are simply built for enduring difficult life conditions and overcoming them with brilliance. They are the ones we got to when we are experiencing problems in life and the ones who comfort us in our time of need. No matter how hard it gets in life, they are prepared to take the blow and overcome these situations.

Gorilla spirit animal is also a symbol of communication bonding with others. This spirit animal teaches you to be more in touch with the people around you and to listen to their needs. You enjoy having the people you love around you and being close to them. The energy inside of a group is what makes you happy and you easily fall into a depression when you don’t have the support of others around you.

Gorilla spirit animal is also a symbol of honor and dignity. You are someone who doesn’t like to fall under the influence of other people and once you make up your mind about something, there is no changing of that decision. You are not inflexible; you simply weigh everything in properly and make up your mind so that others know where they stand with you. When someone insults your dignity or honor in any way, this person is dead for you because you hold strongly to your principles and you don’t let others manipulate you in any way.

You treat other people respectively and that is what you expect in return from them. Besides being an honest and trustworthy person, you are someone who is a natural born leader and people look up to you because they know they can always rely on your help.

Gorilla as a totem animal represents a personality that is sometimes over the top and extreme in its behavior. You are very loud and outspoken about your desires, but this doesn’t make you any less worthy of other people’s attention. You are a very impulsive person and honest simply pours out of you. There is no other word to describe you than trustworthy and people love you because of that. They are always in the clear with you and this is what they respect the most.

Gorilla totem animal makes you a very energetic person as well. You hate sitting around your house all day, doing nothing. Instead, you like to be out and about doing all kinds of things and spending time with your friends. Closeness with other people is especially important for you, because you feel empty if there is no support from others. You are by nature a social person and going out and having fun is what you love.

Some might add that you tend to be a little bit aggressive at times. This aggressive behavior is something that doesn’t surface often but you give in to these primitive feelings from time to time. Another characteristic is your tendency to be stubborn for unimportant things. You are great until someone mentions something you don’t like, because then you become irritated and you want to prove your point by all means. When you grow older, this becomes less of a problem because you learn how to behave and how to control this side of your character.

Gorilla’s symbolism is something that has been relevant for years and it is still important. Gorilla symbolism was created by cultures that have lived near gorillas and observed their behavior because they are the ones who know them the best. In ancient times, behavior was everything our ancestors had, in order to determine animal’s characteristics and traits.

In Asia, or to be exact in China, gorillas were considered to be sacred animals. There are even temples and spiritual places devoted to gorillas and other primates as well. Everyone avoids hurting a gorilla or harming it in any way, because this can be a cause of great misfortune. While monkeys are seen as tricksters, the same doesn’t go for gorillas. They are more honest and respectable animals that are not completely same as their close relatives.

Gorillas in Africa are seen as symbols of family connections and protection. These strong animals always hold together and this makes them an ideal example of family connections and relationships. In Africa they are seen as lucky animals and even seeing them can bring back positivity and peace into your home. They are also symbols of quietness and peace for African tribes, and their presence means wealth and prosperity.

Gorilla symbolism is still relevant today and it is often used in cartoons, movies and other branches of art. They are symbols of strength, family, love and wisdom and their presence on the big screen or on paper always leaves a strong impression.

Probably the most famous example of a gorilla symbolism in popular culture is “King Kong”, a movie that was the first to show an enormous gorilla monster destroying the entire city. This has since become a cult classic and adored by many people. Gorilla tattoos are also ways of expressing great amount of respect people have for the gorillas and their symbolic value.

Dreams about gorillas can be both symbols of something good and something bad. This all depends on the nature of your dream and how you felt during the dream itself. Gorillas might not be often symbols of in our dreams, but their appearance is definitely something we are going to remember.

Seeing a gorilla – If you saw a gorilla in your dream, this means you need to be careful because something or someone might harm you. This dream is a clear signal that something is about to go wrong, therefore you have to keep your eyes open for potential dangers. This dream can also represent illness, so be extra careful about your health and take better care of it.

Feeding a gorilla – If you were feeding a gorilla in your dream, this means you are surrounded by enemies. Be extra careful not to let your enemies get too much information on you, because their only intention is to harm you. You also need to be careful about your romantic interests, because they might not be the way they appear to be.

Gorilla attacking you – If gorilla in your dram attacked you, this means you are about to find love. It might sound crazy that this is a symbol of love, but this dream is going to bring you a lot of positive vibes in the upcoming period. Open up your eyes and heart and don’t miss out on this special person.

Several gorillas – IF you saw several gorillas around you, this dream symbolizes problems you are about to face and try to resolve. This dream can also be seen as a warning sign about the problems that might be in your life for a while now, but you keep on neglecting their resolution. It is time to focus on these problems and get rid of them from your life once and for all.

Gorillas are large primates that inhabit only some parts of our planet and they are definitely one of the animals that most resemble humans. Their behavior and even their appearance in general is the most similar to ours, which is why humans have developed a special relationship with them. Gorillas are symbols of strength, leadership, family connections and wisdom.

Animals are there to remind us about the simplicity of life and our interactions, because not everything has to be complicated. It is interesting to see how these, at first glance strong animals, can show such compassion and love towards the ones they love, just the way the coldest of us are actually soft on the inside. Gorilla symbolism is something that will continue to expand in the future, but for now we will worship the things we know about them and respect their symbolic value.