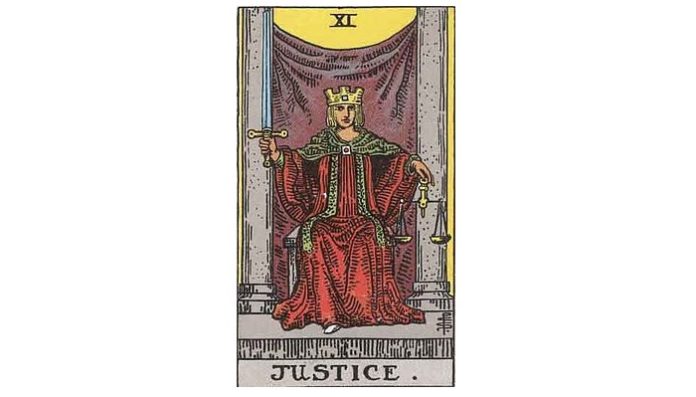 Do you feel judged by her? Maybe even convicted? Does she arouse indefinite guilt feelings in you?

This card is not so much about how your environment or even a real court would judge your current life and actions. The message is rather: Be your own judge! Draw a clear record of what has gone well and right in your life – and what’s not. And then decide consistently which ways you can continue with a good feeling, and by what decisions you might have condemned yourself to a completely unnecessary “prison sentence”.

As a day ticket: If the Tarot image “Justice” stands for you. Today, smart and fair decisions are needed. Maybe you are actually dealing with lawyers or public arbitration awards; maybe you just have to settle a mediocre dispute between your girlfriends or kids. But above all, it’s about being fair to yourself; that you judge your previous life and pursuit neither too strict nor too casual, but quite neutral and objective; so that you can make good and smart decisions for the future!

As Love-Card: If the tarot card “Justice” stands for your partner or your relationship. Fairness is of course a good thing; in every respect – and there you are very clear, open and at eye level. You certainly do not make a detective story out of your love! But sometimes you are so balanced, sensible and correct that it gets pretty cool and top heavy? So the rather rigid formality on the tarot card is just between you two programs? Then put a little more passion into the balance; the judge on the card finally wears red!

“Justice”: assignments of the map

In the Tarot: Major Arcana, Trump XI in the Rider Waite Tarot, in most other Decks Trump VIII

In the old way of counting, in the sequence of the trumps of the great arcana, the force came after the chariot, but as this makes no sense within the coherent history, the two cards Justice and Power were exchanged.

The Tarot Card Justice carries the number 8. The 8 is reminiscent of an upright Lemniscate, the sign of infinity. In this case the 8 consists of two contiguous rings. The 8 stands for the ups and downs of life and its eternal cycle. In the context of justice, this means that one may be able to escape worldly justice, but not the higher, (possibly even in the next life). The Tarot Trump The justice stands for higher justice, for fairness, for the judge, the judge’s judgment, for reason and objectivity. One should only judge, if one has all the facts together. Astrologically, the tarot card is assigned to the scale. Justice is a mirror card.

Depositors and fortune tellers are often confronted with legal issues when using tarot cards to place cards. If the Tarot card displays justice within this topic, then it depends on the cards surrounding it, whether the questioner has to reckon with a mild or a strict judgment.

Sometimes, in a tarot overlay, justice appears more often, which may mean that the questioner may, unintentionally, enter into a delicate situation that he will not find out again so quickly. The Tarot Card Justice is a card that displays karma. At this point it is really advisable to be honest with yourself, because you can not escape the higher justice, just look it in the face and once it’s done, it gets very bitter. In plain language this means not looking for blame on others, or justifying certain acts with a difficult childhood.

In relationship issues, the Tarot card always speaks of justice as an existing or nonexistent equilibrium (equality). The deeper meaning of this card is in the saying that you treat others as you want to be treated. A topic of fairness. Not infrequently, justice in partnership issues is a harbinger of separation, as this card is also associated with divorce by tarot-savvy card readers. The issue of justice is about the moral side of all the laws of life.

Here’s the Tarot Card Justice to reap what you’ve sown. Primarily the professions in which authority is concerned lie in the ultimate consequence of a free will. One is in any case held responsible for certain acts or omissions. In exam questions is to be counted on a fair grading. Justice is the “dry” but fair boss.

Often, card-keepers and fortune-tellers on the card-reading hotline draw day-to-day cards for their advice seekers, perhaps to look for what the next day is best for when something is due and urgent. Here justice is an order to bring order to the profane side of life. Which means sorting papers, arranging an office day, approaching insurance companies, asking for cheaper options, responding to reminders and simply tackling everything that is in the balance. As a situation map, justice speaks of making a memorable experience of self-responsibility.

Be as just and fair to yourself as you are to others!

“Justice”: What does the tarot card show?

At first glance you can see Justinian sitting on the map, the personification of justice that gives this abstract concept a human form. With three attributes, Justinian welcomes us at the entrance of many courthouses: in one hand she holds a sword, the execution sword of the executive, which indicates that a once-spoken verdict will be implemented with the necessary severity. In the other hand Justifies traditionally commutes a scale that symbolizes the judiciary and states that each judgment is made only after careful consideration of the facts and facts.

In addition, the classic symbol still wearing a blindfold, so they cannot see. Not so as to make nonsensical judgments, but, so that it judges without regard to the person, for example, does not allow itself to be guided by sympathies or antipathies for the defendant or the prosecutor.

The two symbols of Justitia also hold “The Justice” on the card, but the blindfold is missing. Instead, a rather strict person looks right at you here. Her features are so serious and harsh that she could as well be a male judge instead of Mrs. Justitia. Raised on a gray stone pedestal, framed by heavy stone pillars, dressed in dignified purple with gold brocade and on top of that also with a royal crown on his head – this form of judge instills enormous respect!

On this map we see a man hanging upside down on a cross and unable to free himself from this predicament. However, if we look at his expression, we will realize that he does not suffer and has come to terms with his situation. The hanged man even shows satisfaction. He has learned to deal with his fate and to depend on the pitfalls and worries. The cross on which he hangs is a sign of our Christian religion and symbolizes the Passion of Christ. Jesus Christ has also come to terms with his ordeal and simply accepted it.

The hanged man is certainly not a positive card, but shows us how to handle our fate. If you have drawn this card as a day pass, you will not have a happy day. They realize that their entire life is full of vice and worry. You also realize that you can not avoid these negative elements. This leaves you with no choice but to accept the vices and worries and to view them as part of your life. Only then can you achieve happiness and contentment in your life. Unfortunately, we humans tend to seek happiness in the material. But often the material (money) is unattainable for many. However, if we manage to drop these wishes, we have made a big step in life forward. Therefore, try to accept their environment with all the bad qualities. Although they are not necessarily happy, but happy.

Occupation: You do not have a good card in hand for this day. The hanged man shows that you are dissatisfied. But this card does not say you have bad colleagues or a bad employer. It merely states that you do not feel well in your skin.

Also expect that you have to do some awkward work and think that you are the one who can best master it.

Love: You cannot speak of great love in your relationship. You notice that your partnership has many problems. However, the card does not say that you have a wrong partner, but only dissatisfied with him. As a single you have nothing to laugh on this day. Even if you have many friends, you are still dissatisfied because you lack the right partner.

Money: With money, you can recognize a lot of problems. It does not matter how much money you own. There are people who live on the edge of their subsistence level and are nevertheless financially satisfied.

However, other people have hundreds of thousands on their account and complain because they cannot afford a million dollar yacht.

My tip for this day: Even if you are very dissatisfied today about your environment and your everyday life, you should still try to accept everything around you and thereby become more tolerant and open.

Wait for the change. Give yourself the simplest solution. Believe in them even if it seems pointless. The hanged man acts as a negative prophecy of helplessness. In fact, this tarot card refers to every day of life and our consciousness. Tarot card reading is also about solving a seemingly hopeless situation through passive and wait-and-see behavior – do not do it, endure the awkward situation for a while and then dwell in the spirit afterward.

An entwined T-shaped beam construct carries the weight of the suspended overhead. In fact, the hanged man on older tarot cards is represented by a balcony gate that is less reminiscent of a crucifixion. The left leg is free and hangs angled behind the bound leg – similar to all historical maps. The hanged man is not wounded or injured – he is just hung up powerless and waiting.

The hanged man takes a strange position on the tarot motive. Somehow the image reminds of the scene of the crucifixion, the T-shaped beams, but the hanged man is only tied up and hangs on his head. Like many crucifixion scenes, the hanged man also has a radiant wreath around his head – symbolizing the sacred, pure and enlightened consciousness. He does not seem to doubt at all that his condition will be temporary.

Sometimes in life situations arise that seem to us hopeless and meaningless. Sometimes we are over-privileged or unfairly treated and would like to be aggressive at once. But this tarot card is an exercise in patience. You could also say: Sleep on it one more night, the next morning the whole situation may look very different.

In yoga, there are many positions where the pelvis is positioned higher than our head. This is to achieve that we can take a new point of view and a new visual awareness of many situations of life.

Of course we have to free ourselves from this crippling situation somehow – but the best way is to wait. Of course, this mentality requires a lot of character maturity from our personality.