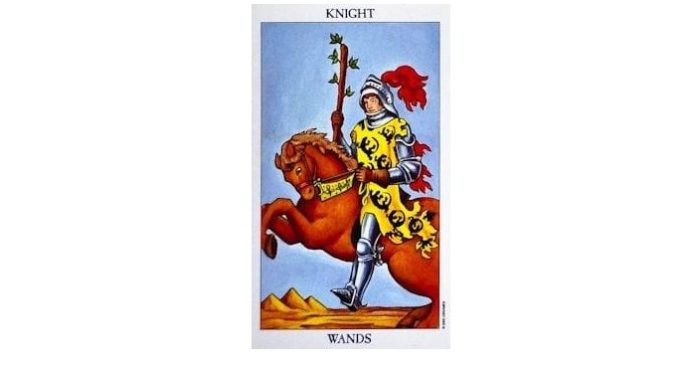 This tarot card stands for the affair, or for the strangers par excellence. But it’s also the move card. When drawing cards with Tarot cards, the Knight of the Wands is drawn, then it can announce a fiery and passionate lover, but also violently buzzing feelings in general.

The Tarot Card Knight of the Wards is about Risk Pleasure, it is the card of the stuntmen. The reddish colors of the desert are even more closely associated with passion and explosiveness in the Knight of the Wands. The experienced Tarot Fortune reader, or the Tarot Fortune Teller, looks at the shiny helmet and neck jewelery of the knight, from which flames seem to strike. On his robe, the salamander bite not in the tail, here testify the unclosed Salamander circles of immaturity and irresponsibility. The fiery horse has the same hue as the hot desert that surrounds it, it stands for risk-taking, because the knight of the Wands is at any moment in danger of being dropped.

The Knight of Wands is also a card that expresses certain illusions in divination by Tarot card reading.

We see on the card knight a very impetuous young man in a knight costume. He sits on a lively horse, which jumps with joy in the air. The man wears a yellow cloth over the knight’s costume. The color yellow is the color of the air or the wandss. The color of his tail on the helmet is red and symbolizes his impetuous behavior.

If we look the man right in his face, we will notice that this is very spontaneous and lively. It’s very hard to stop him. His knight costume gives him a lot of protection. As a result, he feels safe and can live out his feelings even more.

Knight of Wands as a Daily Card

If you draw Knights of the Wands as a day ticket, today you are very impetuous and impulsive. Bars symbolizes vitality and joie de vivre. The Knight Card amplifies this behavior many times over. As a result, your energy and impulsiveness make it hard to stop you.

The card “Knights of the Wands” is a very positive card. But it is similar in behavior more a boisterous child, which one can not bring to rest. And that’s the negative feature, too. You feel very well and so full of energy that you no longer notice your limits. This makes it very easy to overdo it with his impetuous behavior very quickly. After all, this card knows no inhibition threshold. As a result, it can happen that we upset our environment.

The knight of the wands in the Light of the Soul is represented by a young man with long hair standing in a carriage firmly holding the reins. Behind him is the red dungeon. In another tarot, this ticket represents a young man riding an excited horse that stands on his hind legs. In his hand, he holds a stick on which twigs grow, indicating the fertility of this knight. Every moment you are ready for the battle. The link with astrology is represented by three signs of the fiery trinity, Aries, Leo and Sagittarius.

Knights of Wands as well as all other court cards represent the person or quality that is always asked by the person who has questions. This knight fights from enthusiasm. For some people it’s just too much. For others, this is more than welcome. It is pleasant to have a person who always looks optimistic about life. Such a spouse or lover will never be boring. He will have enough courage to ask the world everything, to get out of the boring everyday, to be the hero of his time. That’s why it’s got something sexy in this knight, in his desire to achieve all his ambitions in life. The attitude is what counts, this young man thinks. With an adequate attitude of miracles can be achieved in life.

This is a ticket that signifies courage in dealing with life, and especially love afflictions. It signifies clarity in love in the sense that it always knows what it stands for. Aries, Lions and Sagittarius are very charming men and quite masculine. They are not the nicest, but the guard is such that you want to take them to bed at the moment.

When this card appears in the opening, it signifies either the specific person to be soon acquainted with or the attitude of the questioner towards what interests him. One should always pay attention to the context of the issue. The attitude is direct, combat. Speed ​​and military efficiency are preferred. A person is considered to be the best, and in case it is not willing, he will be focused on winning the first place. If a card refers to a person, it represents signs Leo, Aries, or Sagittarius. So, a person will be born in one of these signs, and if, however, there is something important it will already be found in his birth chart. Certainly, the person will be choleric temperament. The person loves spots. The hair is usually light brown or blond.

The spirited knight of the Wands rarely fits into a relationship situation that is permanent. The Knight of Wands reaches from passion to the full-fledged dispute. Even more, the knight of the wands is the stranger’s ticket. Relationships marked by the Tarot Card of the Knight of Wands indicate that the Tarot Cardholder, or the Tarot fortune teller, is a risk partner in terms of the cardiac pain risk. The Knight of Wands moves hard at the limit in most cases. He appreciates the danger of losing his partner, or his partner, at any time, which gives him a kick. However, he is usually not very surprised when it actually happens. For a woman, it is enormously exhausting for the knight of Wands to be continuously interesting, or to lead a lasting relationship in her own quality measures.

Since the Tarot card Knight of Wands speaks of enterprise and risk-taking, the professional situation is of course based on it. Action is not wrong under the rule of the Knight of Wands, as long as the situation remains assessable and as long as the questioner has an ace up his sleeve. A boss of this quality is a good motivational speaker, but in the long run it can be quite demanding.

If a Tarot Fortune reader, or a Tarot Fortune Teller, draws the Knight of the Wands as a Day Card, then you can not expect a particularly quiet and relaxed day, but this day is very well suited to do things with your partner, you have the necessary means and should use them well. As a situation card, the Tarot card reader, or the Tarot card fortune teller indicates the Knight of Wands as a venture, which gets a certain momentum.

The Knight of the Wands is ambitious and motivated. The world is experiencing very intense. Imaginative, dynamic and has a strong will for life. He is very communicative and an excellent teacher. He likes to travel and is happy to explore new things. An adventurer is by nature and sometimes impulsive. Easily expresses his creativity and constantly seeks inspiration for new ideas.

When the Knight of the Wands finds something that gives him pleasure, he directs all his attention to that. However, he quickly loses interest and seeks a new source of satisfaction. Sometimes this can be quite difficult for those who depend on it. It’s very romantic in relationships. He likes dynamics and constantly seeks new excitement.

The negative characteristics of the Knights of the Wands are impatience and indecisiveness. His hot head can create many problems for him. When it comes to love, the Knight of the wands can be afraid of commitment. More than anything, she loves freedom and in some ways is afraid to stay for a long time in one place.

On issues related to finance, this card symbolizes the news about some important project. You can earn money by traveling or through communication. It is important to remember that it is most important now that you have your self-esteem. People respect you for your enthusiasm and self-confidence.

The Knight of the Wands is also a hint of the beginning or the end of the connection. In love matters, this card usually refers to a passionate love affair. Do not forget that the Knight of the Wands quickly loses interest. If you want to maintain a relationship, you must constantly find new ways to get in touch with your partner.

In a reverse position, this card usually presents impatience and indecision. In opening the reverse Knight of the wands can indicate that you are hasty or insufficiently persistent in your intentions. It’s possible that the job is about to end, or that the outcome of the projects you are working on is very uncertain. You may be in a period of big changes, which gives you a sense of insecurity. It’s important that you stay close, because stress can act very exhausting to you.

In some cases, the Knight of the Wands is a sign of controversy and misunderstanding with others. Be careful how you behave, because you can become very naval, or others may be considered irresponsible.

In love questions, the Knight of the Wands is a partner who does not want to bind. This card may indicate a departure due to someone’s relocation or long journey.

Dark side of the card

Looking for dangers – to the death longing, quarreling, cheating, one flight after another, no consequences