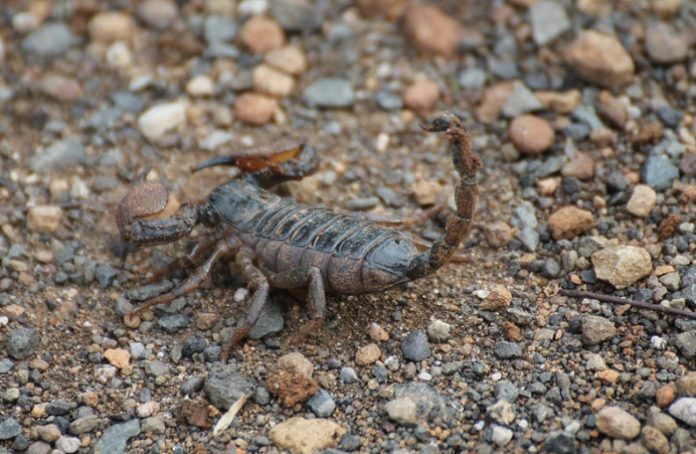 Scorpions are small to large insects in the arachnid family (including the spider and the tick). With the exception of the Arctic and Antarctic ones, scorpions are close to the ground, and are usually seen in deserts, semi-deserts, savannas and tropical forests in northern Europe, North America and South America, as well as in Africa and Asia.

The nocturnal scorpion lives mainly in sandy or stony soils and lives as a cultural successor in the vicinity of human dwellings. Most scorpions are rather predators and feed mainly on other insects and arachnids, sometimes even on lizards, snakes and snails.

In many African and Asian cultures, scorpion has always been considered a symbol of life and death, as it can decide on both. He can take life if he uses his sting and he can give life if he does not. But the scorpion also symbolizes fear of suffering in life and fear of death as salvation. In Egypt, there is the patron goddess Selket, which has always been represented with a scorpion or scorpion sting on her head. In ceremonies, she is often called to protect the lives of people and to lead the dead safely into the underworld.

According to a legend, the goddess Selket once helped seven scorpions when she was in need and since then scorpions are her allies. Even among the Maya there was a scorpion deity – she called herself Ek-Chuah and was the god of war. On many drawings Ek-Chuah is depicted with a scorpion’s tail, which symbolizes the deep connection of this god with the scorpions.

In the second part of the modern adventure film trilogy “The Mummy”, as well as in the independent film “The Scorpion King” (= The Scorpion King), there is an interesting treatise on the pact of a desperate and power-hungry warlord with the goddess of death Anubis, which sends a scorpion to help , In return, the warlord named Mathayus is to leave his soul to the goddess of death. By consuming the scorpion sent by Anubis, the pact will be finally sealed and Mathayus will have the opportunity to recruit undead creatures from Egyptian mythology as soldiers to use for his own purposes.

However, after the consumption of Scorpio, the proud and victorious warlord himself transforms himself into a mythological being, half human and half scorpion. That was the price for the almost invincible army of the undead and their own survival. Of course, this film idea comes not by chance, but is based on many Egyptian legends – but especially on the scorpion god Ek-Chuah the Maya and the Egyptian scorpion goddess Selket. The interesting thing is that in ancient Egypt, there were actually two kings named Scorpio – Scorpio I (around 3200 BC) and Scorpio II (around 3100 BC).

In Greek mythology, it is said that once the hunting goddess Artemis has produced a scorpion to kill the overzealous and giant hunter Orion by a sting, who in turn wanted to kill all the wild animals on earth. With the help of the scorpion Artemis managed to prevent this, but Scorpio and Orion were held by Zeus as star images in the sky, where their hunt continues on and on (even today). If you see the starry scorpion in the east, you should see the constellation of Orion in the west. In a figurative sense, this means that the Orion still flees from the scorpion and seeks protection from the setting sun.

In the Bible, the scorpion is less well off, as he should be in league with the devil and is considered a hell animal. In addition, he is said to have a connection to the ancestors and the realm of the dead, which in turn coincides with the traditions of Egyptian mythology.

The Scorpio is the eighth zodiac sign in the Western Horoscope and the zodiac sign of all those born between October 23rd and November 21st. Scorpio people are mysterious people who are philosophers and more introverted. Although they are not considered, they think a lot and sometimes very profoundly, but they also tend to be impulsive, envious and jealous.

If a scorpion as a power animal excites your attention in a special way, then he wants you to deal with the issues of suffering and salvation. Ask yourself which sorrow in your life most wants to be saved and what prevents you from redeeming it. It is not about clarifying any questions of guilt, but primarily about ending the suffering and recovering valuable life energy. The scorpion is indeed a small, but quite a few and dangerous animal that knows how to assert itself. Threatening danger, he draws his sting lightning fast and stings – sometimes this can be a deadly affair.

Thus, the power animal scorpion also draws your attention to the fact that you are no longer helplessly delivered to fate, but well-armed and well-armed. If the scorpion excites your attention, it will both warn you and force you to listen to it. He has an important message that does not allow for delay and that you need more than you think. Once you have confidence in Scorpio as a power animal, then you have found in him an experienced companion for the underworld, with whose help you can contact the ancestors and deceased.

Likewise, the scorpion also leads you into your own underworld and shows you all the unredeemed shadows, subconscious desires and suppressed longings. Watch where the scorpion goes and where it scores, because right where it literally puts its finger (in this case the sting) on ​​the wound, there is something to redeem or heal. With the help of Scorpion as a power animal, you defeat your inner demons and release yourself from self-imposed suffering, unfulfilled promises and unconscious closed soul contracts.

If the scorpion appears in your dreams, it promises the end of suffering and impending salvation. But a scorpion in the dream is also a symbol of the subconscious, which wants to draw attention to your dark sides. You may want to hide your bad sides, but this will not work for long, as they too are part of you and, so to speak, your second page of the medal.

Likewise, a scorpion in the dream is often a spiritual messenger, asking you to become more involved with the themes of magic, mysticism, darkness, death and resurrection – and above all, your own spirituality.

The poison of scorpion is a destructive force. That’s why the dream symbol in the dream interpretation also stands for destructive emotions. Negative feelings can poison the life of the dreaming and those around him. The arachnid can in the dream, however, also draw attention to the fact that in his environment a person with evil intentions resides.

However, the dream symbol also signals that you are by no means protected and powerless. Like the scorpion with its poison sting, the dreaming is endowed with skills that help him defend himself against attacks. In dream interpretation the scorpion, as a symbol of dreams, also calls for vigilance over the means used by others to harm the dreaming.

Of importance is also what exactly happens with the arachnid in the dream. If one dreams of being stung by a scorpion, the dream symbol warns of someone who is hostile to the dreaming and who will do him great harm with his behavior.

However, the dreaming does not have revenge feelings, but rewards bad with a good deed. The killing of a scorpion is an indication in the dream interpretation that long quarrels are brought to an end. Representing the conflict partner destroyed in the dream of the animal and thus creates space for peaceful times, possibly also together with the person with whom one had a fight. However, if one dreams of eating a killed scorpion, the dream symbol in the dream interpretation is a symbol for the appropriation of foreign assets.