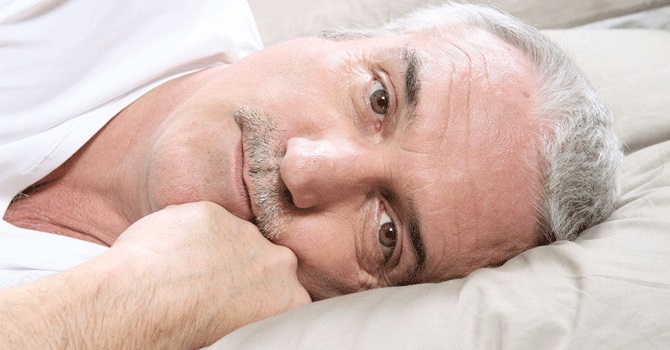 It may sound like a zombie story, but there are people that sleep with their eyes wide open. They get into a normal sleep, just as other people, but their eyelids remain up. This creepy and intriguing phenomenon isn’t so naive, after all. It is called the nocturnal lagophthalmos and may result with severe eye complications.

Our eyelids serve as a boundary to harmful material that may get into the eyes; it protects our sensitive eyes from bacteria and other intruders. Since eyes go dry if they remain open for longer periods than normal, they get even more vulnerable. Tears play extremely important role in our eyes protection and health. They moisturize the eyes and contain valuable substances that act like natural antibiotics and thus eliminate bacteria and viruses.

So, sleeping with eyes open isn’t funny at all; it is a serious threat to our eyes overall condition.

The longer the condition lasts, the more damage is done to our eyes and vision. If the condition is repetitive and occurs every night, the eyes get inflamed, eye cornea and conjunctiva get damaged. Ulcers and dry areas may also appear.

The condition we speak about is considered a type of facial paralysis, which involves degenerations of facial musculature, eyelid muscles in particular. Those muscle disorders could be temporary or long lasting. There are several causes to blame for this strange condition. Nocturnal lagophthalmos could be triggered by an infection, a surgical procedure, a stroke, a trauma, Bell’s paralysis syndrome and some other diseases or conditions. It could also be inherited.

Sleeping with open eyes get you extremely dry eyes in the morning. The sensation is very uncomfortable, annoying and dangerous, as well. The symptoms of dry eyes caused by this condition may include the sense of foreign body in your eyes, blurred vision, reddish and painful eyes and extreme photosensitivity. This condition could be quite difficult to diagnose because patients are often unaware if their eyes get partially closed or remain wide open. Sometimes they don’t even know if they’re sleeping with open eyes and ascribe the symptoms to some other eye issue.

How to treat nocturnal lagophthalmos?

Treatments for this condition often include eye drops, fake tears and eye creams. Those are usually to be applied a couple of times a day or just before you go to bad. There are also physical solutions to keep your eyes shut during the night and thus avoid further complications. Eye mask and hypoallergenic tape could also be applied. The long lasting solution is to take up a surgical procedure. This type of intervention implies insertion of very small golden or platinum weights with purpose to pull the upper eyelid in order to regulate tear flow on the eye surface. Treatment options vary depending on particular level or type of lagophthalmos.

There are different options to relieve the discomfort caused by this odd condition that don’t include surgical intervention. The choice of the treatment would vary depending on the particular case. If the condition is generally mild and could be tolerated, there are remedies that could ease the discomforting sensation patients get after they’ve spent the night sleeping with their eyes open. Since it results with dry and very sensitive eyes, it is important to take up an option to prevent them from drying up in the first place, rather than heal the damage that might appear afterwards.

Mild cases of the condition require appliance of some ointments meant to moisturize the eyes and keep them from drying out. Lubricants, gels and such are usually prescribed to treat this condition. Since there are different types of the syndrome, the appliance of ointments also vary. To people who sleep with eyes open it is commonly advised to apply the lubricant at night, before they go to bed. That way their eyes would be moisturized properly and kept protected from drying out and damages that could follow. There are different products that could be applied, but you need to go and see a doctor to determine what solution would work the best for you. Some people avoid lubricants because they may get thicken during the night and get them blurry vision in the morning.

However, they are important to properly treat the issue and avoid potential damages. There are lighter lubricants that are particularly good for patients whose lagophthalmos also occurs during the day.

Taping the eyelids might be a temporary solution. It literally means you tape your eyes during the night to make them remain closed while you sleep. You should use surgical, hypoallergenic tape, of course.

However, some patients get so desperate upon the condition they even apply the regular transparent tape for paper and such they’ve got at home. A medical, weighted tape could also be applied, since it is heavier and it keeps the eyelids closed. Some medical experts, however, consider this procedure only a temporary solution. Most of patients give it up, since it easily causes irritation and redness if applied for several days in a row.

Since nocturnal lagophthalmos causes your eyes to dry out and all the side effects of dry eyes syndrome, some patients decide to treat it the same wat as they would treat dry eyes. The typical course to relieve the discomfort caused by dry eyes includes the use of eye drops, artificial tears and punctual plugs. Those would significantly reduce the irritation. There are also fancy eye masks that keep the eyes moisturized during the night.

Actually, those are specially designed flexible goggles, meant to be worn while sleeping. They regularly moisturize the eyes and reduce the irritation, preventing the eyes to go dry.

Surgical procedures are another path of getting rid of the condition. They are long lasting and relieving, but they are not necessary in all patients. You could choose either to do the procedure or to take up some of the treatment mentioned above. It depends on the type of your condition and a proper medical diagnosis.

Tarsorraphy is one of the surgical options to make your eyelids normally close while you’re sleeping or to get their normal function back, if you experience lagophthalmos during the day, as well. This procedure is quick and reversible and there are no serious complications documented. Tarsorraphy reduces the outer eyelid functioning and thus regulates the ocular surface problems, as well.

Inserting gold or platinum weights beneath the upper eyelid could efficiently reduce the problems, but this procedure could also be accompanied with not so desired side effects. It might happen it causes one eyes closes more than the other, which is not attractive at all. It could also cause blurred vision, due to corneal astigmatism and implant bulging, in rare cases. Generally speaking, gold and platinum weight implants are well tolerated and efficient.

It is pretty common phenomenon in newborn babies and it differs from the nocturnal lagophthalmos we’ve talked about earlier. You may notice your baby doesn’t shut the eyes while sleeping. That could appear somewhat scary and concerning, but it usually isn’t a reason to worry. When parents notice this condition they get really worried and wonder if their baby suffers from a sleeping disorder or other underlying issue.

However, nocturnal lagophthalmos in babies usually isn’t threatening and it withdraws spontaneously.

Nocturnal lagophthalmos is common in newborn babies and it naturally ceases up to eighteen month of life maximum. The scientific realm still doesn’t have a real clue to this phenomenon. Some experts suggest this condition is associated with prolonged REM phase in children, compared to adults. Babies naturally have somewhat longer REM phase than adult people. Since this phenomenon in babies occurs during the REM phase, scientist concluded it might be associated with its lasting.

However, if the condition doesn’t naturally cease after the eighteen month of baby’s life, you need to talk to pediatrician. There are some possible causes of this type of nocturnal lagophthalmos. It could be inherited or a child may suffer from eyelid malformation, the similar way as adult patients. You need the proper diagnosis in order to treat the condition properly, so you must take the baby to see a doctor. If the case is just about the temporary lagophthalmos, you could physical pull down your baby’s eyelids.