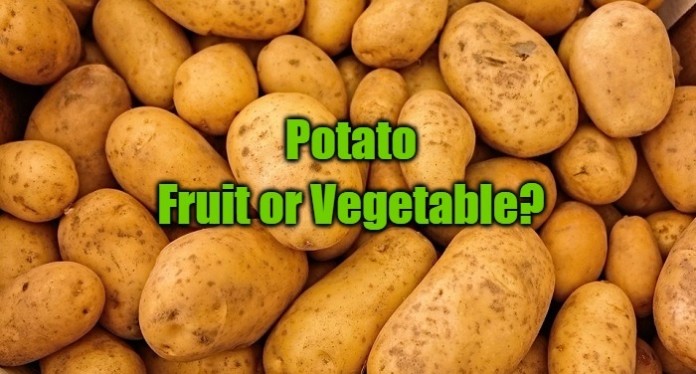 There have always been debates among nutritionists and other experts about the botanical and nutritional classification of some plants, like potato, tomato, watermelon, etc. Potato (lat. Solanum tuberosum) comes from South America and today it is cultivated all around the world.

Potato has always been considered as a vegetable. From the nutritional point of view, potato is classified into vegetables, because we eat potato as a part of salty dishes. But, botanically, potato is classified into fruits. Even if potato plant develops flowers and have green fruits, many people haven’t yet heard about that fact, so it can be very interesting. Due to these fruits, many people consider potato as a fruit. There are strong arguments for both classifications and we still don’t know the real answer.

Below you will see something more about potatoes, so you can decide if you will use potato as a fruit or as vegetable.

Potato is a Vegetable

Potato is perennial herbaceous plant with the underground stem, called tuber. Tubers are used in nutrition and they don’t contain seeds. Because of that, most people think that potatoes are vegetables. Potato that we eat is actually a part of the root of potato plant and that’s why it has lashes on its surface. Those lashes look like tiny roots.

Also, in kitchen we use potato as a vegetable. It is not considered to be sweet or dessert food, so we don’t add sugar to it. We use potatoes for preparing salty dishes. We can boil or fry potato and eat it with meat or with other vegetables. We won’t certainly have potato for dessert and that is a strong fact which classifies potato into vegetables. Also, you should have in mind that sweet potato is not a real potato, because it is not included in the same botanical group as a real potato plant.

Potato is a Fruit

Some people think that potato meets all the criteria to be classified as a fruit, because of the fruits that are developed on the potato plant. Potato is a part of the nightshade family (lat. Solanaceae), whose members are also tomatoes, peppers and eggplants. Technically, those plants are fruits, because they develop from the ovary at the base of the flower.

Also, potato produces green fruits from its flowers, but we don’t eat that part of potato. Although we don’t eat these green fruits, there is a question why potato is not a fruit if it is a flowering plant. These potato fruits look like small green tomatoes. These fruits are considered poisonous, because they contain large amounts of a poisonous alkaloid, called solanine. It is proved that if we consume plants which contain solanine, it can lead to diarrhea, abdominal pain or headache. It is recommended to remove those fruits from potato, because children can eat them. Sometimes, some potato flowers dry up and fall off the plant, so there are no fruits on the potato plant.

Also, it is important to know that potato fruits contain seeds inside. You can use these seeds to plant new potatoes, but have in mind that you will not get the same type of potato.

Potato is Half Fruit, Half Vegetable

There is also an opinion that potato is half vegetable, half fruit. More precisely, green poisonous fruits on potato plant are considered fruit, while edible parts of the plant, tubers and leaves, are considered vegetables.

Nutritionally, potato is considered as a starchy food. Potato is a big source of carbohydrates. Also, it contains vitamin C, calcium and potassium and other nutrients and it is a great source of fiber. Potatoes are healthy and low in fat, but it is important not to consume them with condiments like sour cream, butter and big amounts of oil.

Regardless of whether the potato is considered a fruit or vegetable, it should be part of your diet. Potato has a lot of medicinal benefits, but don’t overdo the amount, because excessive amounts can lead to weight gain, especially if you consume fried potatoes or chips, because they contain high amounts of fat. Boiled or steamed potato is the healthiest option.