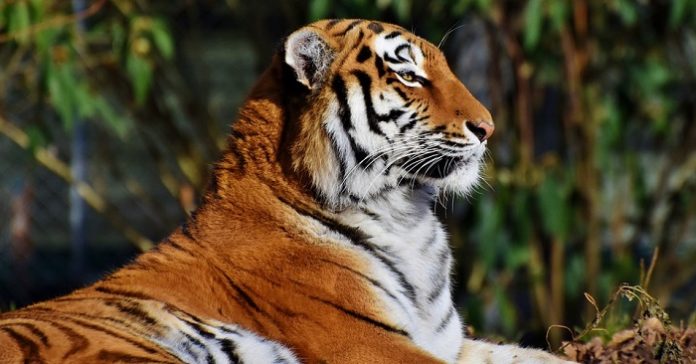 Tigers are important symbols all around the world. Many cultures repsected them and considered tigers to be symbols of power, strenght, independence and wealth. Tiger symbols were often carried as good luck charms and people still believe in the powerful symbolism of this magnificent animal.

Tiger symbolism was created by cultures that lived next to these ferocious animals, but today almost the entire world is well-aware of the symbolic importance of a tiger. So if you ever wondered what does a tiger symbolize, here is the perfect opportunity to find out.

Spirit animals and totems give us strength and power to go through life. We are more similar to animals and nature than we think, because we are all a part of nature. Spirit animals are the ones that followed us our entire life and we can easily distinguish them.

Totem animals can be called upon and we seek our totem animals when we need support and help in life. Totem animals help us overcome difficult life periods and allow us to find the hidden strengths.

Totems meant a lot to our ancestors but they also had the power to awaken the bad in us. If you learn to balance the good and the bad, your totem animal can help you achieve the ultimate greatness.

As a spirit animal, tiger is best described with these words:

People guided by this spirit animal are extremely courageous people who know what their goal in life is. They are not afraid to confront others and say what they mean, if that is going to take them closer to their dream. Even though they are not evil deep down, they are going to do anything that is necessary to reach greatness.

Tiger people are highly motivated and have extremely strong power of will. They won’t give up on their goals no matter how hard it might be to achieve them. You can’t defeat them or persuade them to change their mind, if they have already made the decision. They can be excellent in almost any career path, because they will give 100% to succeed.

People guided by the tiger spirit animal are also very passionate. The best decision they can make in life is to choose a career path they will be passionate about. Once they do this, everything else will be less important and they will be able to become extremely successful.

It is easy to recognize someone whose spirit animal is the tiger. They are silent people who rarely say anything about them to others. It is not that they have nothing to say, they simply know when to speak and with whom. They use their brain and intelligence to reach greatness and other always get left behind in their shadow.

It is hard for them to find a perfect match and someone to spend their lives with, because they enjoy solitude. They don’t like to have someone on their side who depends on them, so most of people guided by the tiger spirit animal spend their lives alone and happy.

As totems, tigers are symbols of persistence and perseverance. You won’t back down under pressure and you will destroy anyone who gets on your way to glory. Others fear you but they also respect you.

There is no other person who can outshine you and make you fell less worthy, since your confidence is extremely strong. You know how much you are worth and nobody can disrupt the opinion you have about yourself. Other often envy your ability to persevere through some hard life moments and end up as a winner.

Tigers are extremely important symbols across the world. But, they have a special meaning to the Eastern cultures and they consider tigers to be kings of all animals. According to this important position, many attributes have been given to tigers such as courage, bravery, power, strength and beauty.

They also believe that tigers can protect human beings from evil spirits, so even seeing a tiger means you are protected from everything that is bad and potentially harmful for you. Chinese also see tigers as symbols of prosperity and wealth, which is one of the reasons why people often hunted tigers and used their skin as decoration in their homes as symbols of power and wealth.

Chinese tradition doesn’t only have one tiger family, there are five different tiger species that are important to the Eastern cultures. These species are the black, the white, the blue, the red and the yellow tiger. White tigers are linked to the West and they are rulers of fall.

White tigers are linked to metals. The black tiger is a symbol of North, winter and water elements. Red tiger rules the South, summer and fire elements. Blue tiger rules the Spring, earth elements and the East. The supreme tiger is the yellow tiger, and it is considered to be the ruler of all animals. This tiger is seen as the center of the world and the supreme leader on our planet. According to an old Chinese legend, yellow tiger keeps a perfect balance of energies on Earth and it allows a free flow to avoid chaos which would be created if this perfect balance would get messed up.

Tigers are very important solar symbols and they are in direct connection with the Yang energy. They are at the same time creators, always ready for action and fight, and can’t be defeated. They can also be seen as destroyers and those who decide about life and death.

Tigers are often linked to impulsive behaviors that can’t be controlled because they are a part of our nature. Chinese people see it as a representation of protection against all possible catastrophes and accidents. Chinese love to say that tigers protect them from three of the greatest dangers, fire, thieves and ghosts. Tigers are used as decorations in many temples, religious monuments and tombs, which tells us about the importance of this animal to Chinese people.

In addition to the green dragon, black turtles and dark red phoenix, it is the tiger most commonly used as a happiness symbol in Chinese art. How could it not be, when it is considered that they have just created the world and divided the sky into four squares!

Lucky charms and amulets with a symbol of tigers are traditionally given to newly born babies to protect them from negative energy, while the head of the tiger is a common detail on children’s clothing – whether or not it is true, even a piece of clothing with this symbol gives you power and fearlessness. Let’s not forget to point out that, besides the apparent power and strength, the tiger represents both riches and prosperity.

After all, Tsai Shen Yeh, better known as the God of wealth, is riding on a tiger who keeps his treasure chests safe. Make sure there are at least a few tigers around you or close to you every day, because you will certainly have the necessary strength and power to go along your day.

The Tiger is one of four heavenly animals that make up the base of Feng Shui. By surrendering, the green dragon, the white tiger, the black turtle, and the red-haired phoenix created the world and divided the sky into four squares, each one ruled one of them. Tiger got the western sector and became the symbol of metal and Queen of the West Mother.

Chinese often beside its original name Baihu (white tiger), also called Laohu (old tiger). This has nothing to do with his real age, but represents wisdom and strength.

As the dragon and the tiger are connected, so that one is on the right and the other on the left side of the front door, it should be noted that the tigers’ side is always slightly lower than the dragons, so that the imperial dragon holds the dominant position. If this condition is not fulfilled, the power of the white tiger turns against the indigenous people. It is important to correct this Feng Shui irregularity, which is easiest to do by placing a dragon symbol on the left side of the front door, which will be higher than the tiger on the other side. It can be a tall plant, image, or calligraphic sign for the dragon.

A white tiger protects the family from robbery, accidents and all sorts of accidents.

Never place a picture or a figurine of the tiger within your home unless you are born in the Chinese year of the ruling tiger or dragon. Tiger is a powerful symbol, which few people can carry in their home, no matter how decoratively it looks. If you are too lazy to wear a tiger image, you might get ill, or someone who is close to you.

Tiger eye meaning is extremely widely-known to people. Tiger’s eye is a chatoyant gemstone that was used as a talisman by cultures all around the world. They can be found in South Africa, Thailand and Northern Cape Province. Soldiers would often wear them to battle s protection and power talismans. Tiger eye stone meaning is still important and people wear it as protection and luck charm.

The Jewish people see tigers as symbols of worth and the Romans link it to the God Bachus. Shamans consider it as a symbol of supernatural power and link them to the spirits of the forest.

In popular culture, tigers still are symbols of power and strength. Their symbols are often used to represent sports teams in order to show others the amount of strength they have. Tigers are often used as tattoos and people paint them on their bodies to invite their powerful symbolism. Tiger tattoo meaning is the same as its symbolism, which means they represent power, strength, courage and beauty.

Dreams about tigers can have different meanings. Sometimes they represent positive things and other times they symbolize negativity. Dream interpretation can be complicated so it is better to remember as much as you can about the dream in order to get a more accurate interpretation. It is very important to remember how you felt when you saw a tiger in your dream and what was your reaction.

All of these small things can have a different influence on our dream interpretation and completely change the meaning of a dream.

If you had a dream about being attacked by a tiger, this means you are surrounded by negative energy and negative people. Someone from your surroundings might be plotting against you and preparing to do something bad to you. The more damage the tiger does to you in the dream, the more negative energy there is in your life. Avoid spending time with negative people and distant yourself from negative situations completely.

If the tiger in your dream was in a cage, this means you will be successful in your attempts. You will be able to defeat your enemies and reach great success on many fields. This dream also symbolizes money and increase in your income. Money will start pouring in from somewhere and you will be more than happy about that.

Tigers might be dangerous and ferocious animals, but people are equally in love with them today as they were in the past.

Our ancestors feared them but also respected them for their independence and perseverance that couldn’t be compared to any other animal. Tiger symbolism is still very important today and people truly believe in its power.