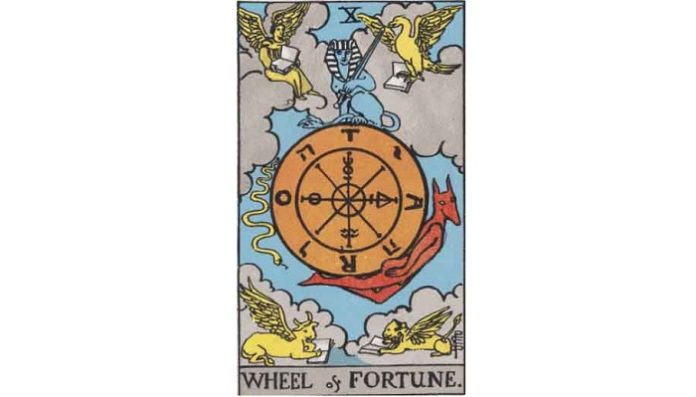 The Tarot Card The Wheel of Fortune is the 10th trump in the great arcana, so this card carries the number 10. The number 10 is a limit number, which means that from that point anything is possible, both falling back in the past and going out in the future. The 1 is not even a prime, i. she has an extra status and the 0 is unknown terrain, the new one. So it is obvious that this number is assigned to destiny, fate is uncompromising, either-or.

The Wheel of Fortune or Fortuna is also called this tarot card. Fortuna, the goddess of luck, does not give her favor to everyone. Who dares to win, and the recognition of higher powers and laws, are the deeper analogies to this (often dreaded) tarot card. The cross sum of the 10 = 1, the 1 has a relation to the magician, that means -> to master his destiny, or to be the blacksmith of his own luck.

What a calender or a cartographer who deals with Tarot cards knows in any case, when The Wheel of Fortune turns up at the time of card reading, is that there will be surprising turns in that matter. These twists range from complete upheaval, to the experience of absolute happiness. The wheel on this Tarot card is reminiscent of the spinning wheel of the Norns, who spin the thread of fate for humans.

Anyone who opposes his fate will break it. If you accept your fate, you can do it yourself to a certain extent, if you are prepared to accept the routine involved.

A Tarot Fortune Teller sees fateful connections in relationships marked by the wheel of fate. These relationships, or marriages, are anything but easy, because there are many twists and turns in daily life together. What can you do there? Is the logical question sequence of the advice seekers. In this case fate wheel does not allow itself to deal with itself when fooling with tarot cards. What one person releases in another, what one person causes in another through his very existence.

The Tarot Cards fortune teller, who is consulted in professional matters, often sees the Wheel of Fortune as a pesky routine. Here the surrounding Tarot cards usually show the recommendation of a change in the professional field.

The wheel of fate alone should not be left as a day ticket, here you need a context in which the fate will report.

Therefore, it is good to draw 2 day passes here. The wheel of fate as a day ticket and the second ticket as influences. Thus, we also have the daily situation here, which is positive or negative depending on the influence card.

The image on the tarot card is not in vain reminiscent of a wheel of fortune from the fair, which rotates constantly and in which one wins and sometimes loses. That’s the way life is, you have to learn to handle it, the card actually says; Of course the bike does not stop there!

The destiny wheel itself, the orange disc in the center of the image, is decorated in the Rider Waite Tarot with a multitude of mysterious signs: in the center appear alchemical-astrological symbols (eg the sign for the planet Mercury or Mercury above). In the outer ring, four Hebrew letters (which give the ineffable name of God as Jod He Vau He) are replaced by four Latin letters. Depending on where you begin and end, you can read from the latter TORA, a reference to the Jewish Book of Wisdom. However, this also results in TAROT, ORA (Latin for “pray!”) Or ROTA (“turn yourself!”, Also in Latin). Confusing, right?

An ancient Egyptian sphinx, the puzzle queen of antiquity, then enthroned triumphantly on the wheel, above human, below cat, while down below right as a human body with the head of a jackal floats a mythical creature in which the circumstances are exactly the opposite. The third marginal phenomenon on the bike is a serpent, to which we usually think of the Fall of Paradise, but which is also considered a symbol of mutability.

With all its whimsical signs, the wheel hangs free-floating in the air. In addition, in the clouds at the edge of the picture are also four yellow-golden cherubim, that is, more miraculous beings, this time of Oriental or Old Testament origin, all winged. In Christianity, these beings then became symbols of the four evangelists Matthew (human or angel), John (eagle), Luke (bull) and Mark (lion), while astrologers see in it the four fixed signs of the zodiac (besides Taurus and Leo the angel for the Aquarius and the Eagle for the scorpion stands). Phew, a lot at once, right?

The whole complex symbolism of the map, however, basically amounts to just one simple statement: No matter which worldview you trust – life turns, it changes constantly. So, get involved!

As a day ticket: If the Tarot picture “Wheel of Destiny” stands for you

Today is one of those darn days where you feel like you have nothing in your own hands. Everything is different than expected. But this is already very familiar to you, right? So, stay calm. Already tomorrow, the wheel of fortune of life can promptly promote you from the loser to the winner. Maybe even something is already starting today which at first seems like a strange coincidence to you; but later you realize the great opportunity in it!

As a Love Red: If the tarot card “Wheel of Fortune” stands for your partner or your relationship

Your lover is behaving very bizarre right now? The eternal ups and downs of emotions are troubling you both! If any of you become a mystery-maker then no one is helped. It would be better: Talk about it! Remember the good times together in the bad times; and in the good quiet even the worse phases of your partnership that you have already overcome together. That gives you strength for more!

The Tarot Wheel of Destiny symbolizes that not everything is in our hands. Rather, there is much in this world that is determined by strong forces that we can not influence, let alone direct. We are at one point in our lives or in a new situation where we can not change anything. Maybe a new phase of life or greater change begins.

At first we are powerless against this. But not accepting and accepting it would be wrong and would mean stagnation. It is important to accept one’s own destiny and to act accordingly. This situation may be uncomfortable for us at first, but in hindsight, coping with it means happiness and positive progression. Because, if the wheel should also turn down, at some point it will go up again.

If we are at the point of an upward movement, this means success and joy. The card can then be a particularly positive sign for a new beginning.

Whether the wheel of Fortuna has turned up or down, it is important to accept fate and act upon it. But if the shadow side of the map is lived, then we either fiercely fight against fate and challenge it, or fall into resignation, become passive, and believe that every action is useless.

In love, the wheel of fate can indicate that an existing partnership is at a turning point. It can be in a critical phase or in a very nice time.

Should problems arise, we should not give up. If we manage this time together, we will see in retrospect how important this phase was for a happy future. As Fortuna is often very lucky, this card can be a nice event or a happy development. Singles could make an almost fateful encounter.

The map indicates a change. Either we are experiencing a failure such as the loss of a job, or the bursting of a project, or another job cancellation, or – we are very lucky. We find z. Eg a new appointment, an attractive project or similar.

Whatever happens, we can not change much at the moment, so we should try to make the most of it.

Bad luck, failure, end of a phase, rebellion against fate

The wheel of fate turns incessantly and today can provide a new situation that you should face openly and positively. Even if the situation might not seem very pleasant at first and you do not immediately feel the positive aspects, the wheel of fate is often a sign of luck.

The wheel is not only one of the greatest inventions of humanity, it has also found its way into our language. Sayings like “I feel like I’m in a wheel” or “… strapped to the wheel” are standing notions, as well as “The Wheel of Time” or “The Wheel of Destiny”. And the latter is also the name of the number 10 card in the Rider Waite Tarot.

There are no people on the arkanum, but a lot of symbols. So the spokes of the wheel are the alchemical signs of water, sulfur, mercury and salt. The four winged beings from the vision of the biblical Ezekiel decorate the corners and are closely related to the four elements and the four fixed signs of the zodiac.

The number four is a big theme of this card, and that number is very symbolic. The Germans were holy to the Teutons, they speak of the four pillars of the earth, the four cardinal points, but above all of the four elements – it is a divine number. And that’s what matters here, too. The wheel is the movement, the course of things and also the time felt. It turns without us being able to influence it in any way. What’s up today is tomorrow below. Nothing stays constant.

In that sense, the wheel indicates a change that is approaching us. Anyone who has become embroiled in problems and is no longer “on the spot” will be comforted by the fact that nothing stays as it is. With everything in motion, the current situation can not remain unchanged, so there is always room for improvement. Any change brings the attentive a new view of things and thus new opportunities in a change.

Those who can take the comfort of time will find that the pain is relieved. Only one must not stand against the movement and dig himself, so to speak, with his pain in the here and now, while the wheel of life continues to turn. That means giving up all growth, development, and, above all, new opportunities and opportunities.

Everyone knows the smart example of “half empty” and “half full” glass. The saying “Nothing stays as it was” is very similar. The one thing makes this statement scary, the other awakens hope. While the first, who is also subject to the wheel – no matter how he tries to preserve his life – banishes the inevitable changes from his perception, he awakens in the Second Hope – hoping for a new beginning, better job opportunities or relationships. Or man’s natural curiosity is here, the urge to know what’s waiting around the next corner. In addition, the wheel can only bring good for a man who has arrived at the end of his powers.