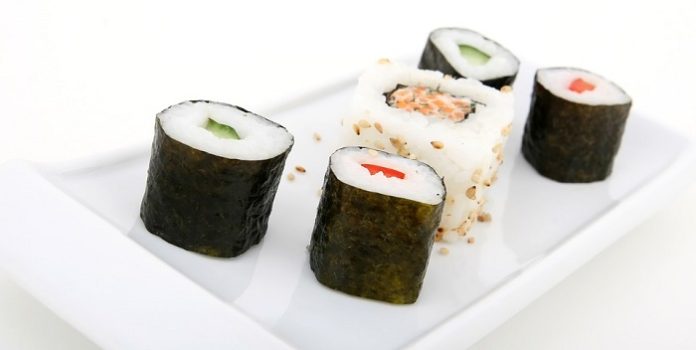 In this article we will talk about sushi and its impact on the health of expectant mothers. If you are pregnant, you may be told not to eat sushi because it can be harmful for you and your baby.

But, is it true? Can you eat sushi in pregnancy or it can be harmful? Read along and you will find out, but first you will get to know something more about sushi, as a traditional Japanese dish.

Sushi is a Japanese dish made of cold rice garnished with raw fish and other seafood. Sometimes sushi also contains some vegetables or tropical fruits. Sushi can be prepared with white or brown rice and it is usually prepared with raw seafood.

Because of that, you may not be sure if sushi is good for pregnant women. Sushi is usually eaten with condiments, such as soy sauce. Sushi is considered a healthy dish because all its ingredients are low in fat and high in protein, minerals and vitamins. Omega 3 fatty acids in seafood also provide a lot of health benefits.

Is It Safe to Eat Sushi During Pregnancy?

Well, we can say that it is safe, but the answer is a bit controversial. There are different opinions about eating sushi in pregnancy. Most experts consider that sushi is safe to eat in pregnancy as long as it is made of cooked fish. If you are pregnant, you should eat sushi that is made with cooked fish or vegetables.

Why is Raw Fish Bad When Pregnant?

If pregnant women eat raw fish, it may cause a blood infection, which could be very harmful for her and her baby. Most experts recommend that pregnant women should eat fish and other seafood that is cooked to 145 degrees F, because cooking will destroy any harmful parasites, viruses and bacteria. It is known that the immune system of pregnant women is more susceptible to listeriosis and other foodborne illnesses.

It is known that raw fish such as salmon contains parasitic worms which can cause many health problems in pregnant women. The infection caused by parasitic worms is reflected by symptoms, such as nausea, vomiting, abdominal pain and diarrhea. This condition can be very painful and in some cases it can also be fatal. Eating fish that has been contaminated with worms can also cause allergic reactions. To avoid any of these health risks, you should not eat sushi made with raw fish while you are pregnant. Sushi is usually made of raw fish such as farmed salmon, because this type of farmed fish is unlikely to contain parasitic worms.

Also, if sushi is made of smoke salmon, it does not need to be frozen before it is used. It is known that smoking will kill all potential worms in fish. If you salt or pickle raw fish, it will be safe to eat.

If you decide to make sushi at home, it is necessary to freeze fish about 4-5 days before using it. It is believed that freezing raw fish before using it can make it safe during pregnancy. But, many experts have a different opinion. It is true that freezing can destroy some harmful parasites, but it will not kill pathogens, such as bacteria and viruses. So, it is best to avoid sushi made of any raw fish.

Although eating raw fish is not recommended during pregnancy, in Japan it is considered absolutely safe. Eating sushi made of raw fish is a part of a healthy diet as long as mercury levels in fish are safe. It is important to eat low mercury fish and you can enjoy sushi even in pregnancy. Women in Japan don’t stop eating sushi when they become pregnant because sushi is suggested as a healthy diet during pregnancy. There are experts who consider that pregnant women can eat sushi made of raw fish because raw fish is absolutely safe if eaten in moderation.

In the end we can say that there is no conclusive evidence yet that sushi has an adverse effect in pregnancy. It is true that raw fish is not good for pregnant women, but small amounts of raw fish won’t do any harm to expectant moms and their babies.

To avoid any health problems, it is best to eat sushi that is made of cooked fish. Raw fish may contain parasitic worms, bacteria and viruses and it can lead to food poisoning and other health complications. Some experts recommend freezing raw fish as a way to get rid of parasites, but sometimes viruses may not been killed completely. Other experts say that freezing raw fish is not good in pregnancy.

However, if you decide to eat sushi while pregnant, it is best to eat sushi made with cooked fish. It is best to be informed about all the benefits and risks of eating raw fish and sushi when you are pregnant. Also, you should always consult your health provider first, in order to avoid any health risks.