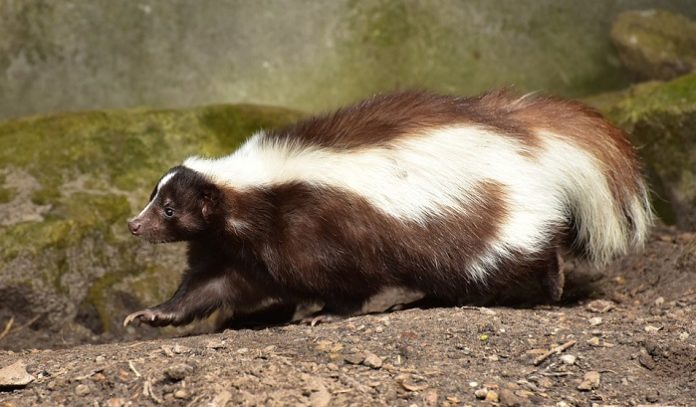 Animal symbolism is not only for those who believe in spirit animals and totems, it is also full of interesting information about animals themselves and can be our way to look deeper into the history behind an animal’s symbolism. Animal symbolism mostly consists out of spirit animals and totems but it can also retrospect into the symbolical meaning that a certain animal has in many cultures.

The animal symbolism itself is created by people who lived closely to animals and watched their behavior every day. Animals were an endless pool of inspiration to people and we saw them as our spiritual guiders and influences. People in the past believed that a certain animal or her spirit can give us a strong motivation and power to move on and go past our troubles.

In today’s text we will be talking about skunk and the symbolic meaning behind it. This interesting creature is definitely a strong symbol in many cultures and the history behind his symbolism is something that is even more informational. So, if you ever wanted to learn more about this peculiar creature, here is a chance to do that.

Spirit animals and totems can give us so much information about ourselves. Every person has its own spirit animal and totem and in essence they can be completely different animals. If one person has a specific animal as its totem this doesn’t mean that his spirit animal is that same animal.

Totem animals are determined by our birth date while spirit animals are the animals that follow us our whole life and lead us through life in a way.

As a spirit animal, skunk is best described by these words:

People who are guided by the skunk spirit animal are very aware of their surroundings and very confident in everything they do. No matter how hard life gets, they never lose their confidence and they know that better days are coming. When your spirit animal is a skunk, then you are someone who knows how to wait for the right opportunity to come along and you don’t jump before you decide thoroughly what you want to achieve.

You decide on your goals early on in life and they have to complete. There is no other choice for you besides success and everyone knows that.

You are also prone to defensive behavior because of your negative past experiences. They have tortured you and made you feel insecure, which is why you usually respond to other’s bad behavior with defense. This can sometimes prevent you from exploring the world and living fully. Skunk spirit animal is also symbol of innocence and effectiveness. There is nothing you can’t accomplish if you set your mind to it. You are a very hard-working person and success doesn’t come easy to you.

Skunk spirit animals symbolize courage and assurance but also respect towards the ones who deserve it. Overall you are a very confident person but you never let your confidence overrule your kindness, which makes you a good person.

As a totem animal, skunk describes a personality that is very pacifistic and someone who doesn’t like to get into a fight. Even though you can defend yourself, you rather avoid conflict and try to sort things out peacefully. You often get described as the people pleaser and someone who is going to go to great lengths just to avoid conflict.

Besides that, you are a very hard-working person and you set your goals high. You want to accomplish them by any means necessary and this is something you usually manage to do. You attract people who are charismatic and open, because you are like that yourself.

Skunk symbolism is constructed by many cultures that live all around the world. This peculiar animal is seen differently in almost all of them, which only gives the impression that people are not always on the same page when it comes to this small mammal. In Native American tradition, this animal is seen as a symbol of death and something overall negative.

They even thought that skunks can kill you, although they probably thought that because of the terrible smell these animals are able to produce. They thought that the liquid that the skunk was able to spray on them could kill them, which is why they avoided them in a long circle.

In European culture, skunks are seen as courageous and strong animals that are able to resists many struggle and still persevere. Even Europeans knew that skunks are best to be avoided, even though they didn’t think that their smell could kill them. In today’s culture, the ability of a skunk to scare away his opponents by spraying smelly liquid on them is seen as amusement, and many movies and cartoons used skunks as their main characters.

This is something that is especially amusing for children, so we have many examples of children’s characters represented as skunks. Although skunk tattoos aren’t so popular, in case someone gets it, it is a symbol of assertiveness, courage and confidence.

Dreams about skunks can have both positive and negative connotations. These dreams can represent something very positive and make us happy, but other times they can be seen as warning signs about something that is about to happen. Since skunks are mostly avoided in real life, most of the interpretation of skunk dreams is negative.

Seeing a skunk – When you had a dream about seeing a skunk, this means you have a lot of people who are not genuine and honest. Their intentions are not true and they are only in your life to take advantage of you. Be careful because they might hurt you in many ways.

Smelling a skunk – IF skunk in your dream sprayed you or you could smell it, this means you are going to get in some sort of conflict with someone close to you. This conflict can result in big consequences and you can lose a lot if you don’t open up your eyes in time.

Being a skunk – IF you saw yourself as a skunk in your dream, this means you are a very capable person. You see yourself as someone who is able to get on his feet no matter what happens and you are going to overcome things in your life no matter what.

Killing a skunk, dead skunk – this dream is a symbol of revenge that can be inflicted upon you or by you. No matter which way the revenge goes, you are going to be hurt by it. Either you are going to hurt someone you know or love or someone who used to love is going to seek revenge. This is something that has been caused by your past behavior a you are now paying the price for your bad ways.

Animal symbolism is not only for those who believe in spirit animals and totems, it is also full of interesting information about animals themselves and can be our way to look deeper into the history behind an animal’s symbolism.

As spirit animals and totems, skunks can give us a good inside look of our character and tell us which traits to cherish in ourselves and which ones to throw away.

Skunks are symbols of courage, assertive nature and defensiveness. Skunk symbolism is constructed by many cultures that live all around the world. This peculiar animal is seen differently in almost all of them, which only gives the impression that people are not always on the same page when it comes to this small mammal.

Even though it is mostly avoided by humans because of its nasty habit of spraying smelly liquid, we can’t deny that this little animal holds such a great amount of great qualities.